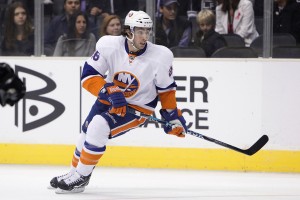 We are now at the All-Star Break of the 2011-12 NHL season and what better time to sit down and grade each member of this year’s Islanders squad?  Before we dive into analyzing C minuses and D’s, I did want to bring attention to an interesting tidbit that was revealed after last nights Islanders-Maple Leafs game.  The Isles lost to the Leafs 4-3 in OT in a hard-fought battle.  This game was the second game of a home and home with Toronto and remarkably enough, the Maple Leafs managed to go BOTH games against the Islanders without surrendering a power play.  Now if you watched both games (especially last night), there were several high sticking and cross-checking calls that could have gone against Toronto but did not.  Coach Jack Capuano took the high road in the post-game press conference and avoided criticizing the referees.  We also learned that in Toronto’s last 11 games, they have had only 16 penalties called against them!  That is an incredibly low number in the “new NHL” especially for a chippy team like the Leafs.  I’m not one to call for conspiracies, but it sure seems like the refs have learned to put away the whistles while the Buds are on the ice.  Now, on to the report card…

John Tavares (A); I think it’s safe to say John Tavares is living up to his potential as the #1 overall pick in the 2009 draft.  The only reason he did not get an A+ is because he needs to be more consistent in the face off circle.  In fact, that might be the only flaw in his game right now.  Not only is he the most talented player on the ice most nights but he is also the hardest working which is a treat for Islanders fans to see.  Clearly he is the best player the Islanders have had since the days of Pierre Turgeon.  Oh, and he’s only 21.

Matt Moulson (A-); Not bad for a player who was struggling to make it in the NHL huh?  Moulson has 22 goals, well on his way to his third straight 30 goal season.  Playing on a line with Tavares certainly helps and it is clear these two childhood friends have great chemistry on the ice.  Moulson might be one of the most underrated players in the NHL right now.

P.A. Parenteau (A-); Another guy who struggled to keep an NHL job has made a name for himself with the Isles.  He will still have a mental lapse from time to time with some sloppy play, but for the most part he is a brilliant playmaker who always plays the game hard.  He is currently tied for 5th in the NHL with 33 assists.

Travis Hamonic (B+); The second year blue-liner is one of only 3 Islanders regulars (Moulson and Tavares are the others) with a positive plus/minus.  He has been the most consistent defenseman for the Islanders, playing against opponent’s top lines and logging big minutes.  Plus he’s not afraid to mix it up and drop the gloves, adding some toughness to a blue line that is otherwise lacking in that department.

Matt Martin (B+); Nobody will confuse Matt Martin for a 30 goal scorer any time soon, but he is the type of player every team wishes they had.  The human wrecking ball is currently leading the NHL in hits and is the one Islanders forward who will stand up and drop the mitts with opposing team’s tough guys.  Oh, and he has some skill with 5 goals and 7 helpers on the season and has developed into a top 4 penalty killer on the team.  Bonus points for his killer flow as well!

Evgeni Nabokov (B); Because of the Islanders’ goaltending carousel early this year, it took a while for Nabokov to get going.  But with recent injuries to Rick DiPietro and Al Montoya, Nabby has gotten plenty of playing time and has flourished in the process.  His 2.38GAA and .919 SV% have been one of the main reasons the Islanders have hung around within sight of the playoffs.  If the Islanders fall out of contention, his stellar play of late may also just be increasing his trade value.

Kyle Okposo (B-); Two months ago, it is very likely Okposo could have been given an F grade.  But since he has been moved up to play on a line with Tavares and Moulson his game has flourished.  His game has gotten more aggressive and the results have been shown on the scoring sheet.  He still is far from what his potential is, but at least he is headed in the right direction.

Al Montoya (B-); The fact that Montoya missed about a month due to injury could have effected his grade.  Since he has gotten hurt, Nabokov has taken over as the Isles #1 goalie, but Montoya has still had a big role and will continue to do so down the stretch.  His numbers are decent with a 2.54GAA and a .912 SV%.  Considering he was yet another player struggling to find a job in the NHL, this was a great pickup last year by Garth Snow.

Frans Nielsen (B-); Frans is a pretty decent second line center, but certainly the Isles could use an upgrade in this department.  However, there are certain things Frans does for the Islanders that are irreplaceable.  For one, he is a God in the shootout.  His backhand move might be the best in the game.  And he is a very solid penalty killer.  More consistency in his offensive production is something the Islanders would like to see from the Danish center.

Michael Grabner (C+); After a stellar rookie season, there was a lot expected of Grabner this year.  He has shown flashes of the player we saw last season, but has not put it all together with just 14 goals on the season.  That doesn’t seem terrible, but given the amount of breakaways Grabner has had, you would like that number to be closer to 20.

Andrew MacDonald (C+); Last year was a breakout season for MacDonald where he established himself as a solid defensive d-man who can skate and move the puck a bit.  Early this year, MacDonald fell victim to many goals against and looked pretty slow.  As of late he has picked up his game with defensive partner Travis Hamonic and has been the reliable shut-down pairing we all hoped they would be.

Mark Streit (C); This grade is a bit disappointing for the team captain.  You would expect more out of your #1 defenseman but in fairness to Streit he is coming off a shoulder injury that kept him out all of last season.  He does have 3 goals and 23 assists and has shown some brilliant flashes of the old Streit on the power play.  But he has been timid in his shot selection and has often been burned by being trapped in the offensive zone.

Nino Niederreiter (C-); Nino’s grade may be more indicative of the coaching staff than himself.  The Swiss rookie winger has been buried on a fourth line with Jay Pandolfo and Marty Reasoner most of the season, playing less than 10 minutes a game.  When he does get playing time, he is physical and has shown a wicked wrist shot.  More ice time is needed to see where his potential can take him.

Milan Jurcina (C-); Milan Jurcina has finally started to use his big frame to his advantage and has started to play physical.  He also possesses a hard slap shot that the Islanders utilize on the point of their second power play unit.  However, he is still sloppy in his own zone and a team low -23 rating does not help his cause.

Josh Bailey (C-); Josh Bailey clearly is not the player Islanders fans thought they were  getting with the 9th overall pick of the 2008 draft.  Bailey couldn’t buy his way on to the score sheet early this season while playing with Blake Comeau.  Since Comeau has departed to Calgary, Bailey has picked up his production slightly, but 5 goals and 8 assists just won’t cut it.  The only reason he avoids a D grade is because he has developed into a strong penalty killer and does occasionally flash some sweet moves.

Dylan Reese (C-); Reese only has 14 games under his belt this season, but he should get more playing time as he is clearly better than Mark Eaton, Steve Staios and Mike Mottau.  He doesn’t do anything flashy, but at least he can skate which we all know is critical in today’s NHL.

Mark Eaton (D); Eaton is a steady defenseman who doesn’t provide much offense.  Also, he flat-out can’t skate and is routinely beat wide by faster forwards.  At least he does bring some intelligence to his game and does limit his turnovers.

Jay Pandolfo (D); Pandolfo was obviously not brought here for his offensive fire power.  Case in point, he has 1 goal and 0 assists in 31 games.  Some sporadic production would be nice, but don’t expect much from the ex-Devil.  He does play a role on the penalty kill unit, but other than that there is not much to Pandolfo’s game.

Tim Wallace (D); Wallace is another career minor leaguer on the Isles roster.  He plays on the fourth line and does bring some energy.  Other than that, there is not much offense to his game and he does not serve any role of an enforcer.

Steve Staios (D); Staios was added late this off-season on a tryout basis and not only made the team but was also given an “A” to wear on his sweater.  He does seem like a good leader and is a gritty defenseman, but he like Eaton and Mottau just cannot skate in today’s league as he is often the victim of getting beat in one on one situations.

Brian Rolston (F); I always liked Brian Rolston and thought the trade for Trent Hunter was a good one.  But watching him play, you can easily see he has nothing left in the tank.  He never seems involved in the play and when he does get off one of his slap shots it is usually way wide of the net.  Just about the only reason he is useful on the roster is that his $5 million salary is needed to hit the NHL cap floor!

Marty Reasoner (F); Reasoner was brought in to be the 4th line center, replacing the beloved Zenon Konopka.  Well with just 5 assists on the season and a -16 rating, he has not brought any attributes that would qualify him as a viable replacement for Konopka.  Not much toughness, not reliable defensively and no offense = not a good off-season signing.

Mike Mottau (F); Of the 3 “senior” d-men on the team, Mottau is probably the worst.  He has found his way out of the lineup and it does not seem there is much of a future here for the Massachusetts native.

Rick DiPietro (Incomplete); Well considering DP has only started 6 games this season and is now out for the season (again), it is hard to give him a grade although it would most likely be an F considering how much of a liability he was between the pipes.  I could go on for days about the former first overall pick but why not take a look at fellow Hockey Writer columnist Anatoliy Metter’s article on DiPietro?