As the summer drags on, there is one headline that keeps resurfacing for the New York Rangers. Will Nick Holden be traded? The answer to that question is that he probably will be. It’s just a matter of when it will occur, either during the latter stages of summer or during the season. 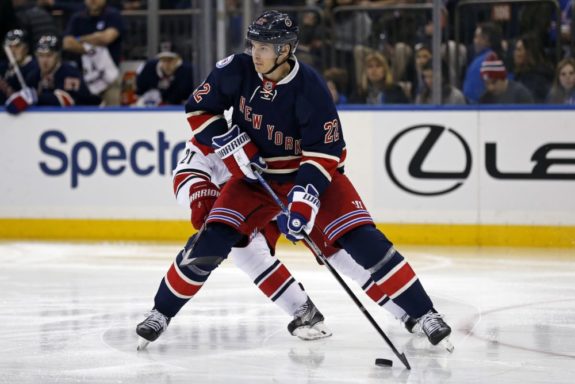 In multiple reports, Tyler Bozak of the Toronto Maple Leafs was rumored to go the Rangers. However, according to a TSN report and Larry Brooks of the New York Post, the Rangers have no interest in Bozak. With Bozak out of the picture, the Rangers still need a center. There is one center, also from the Atlantic Division, that could make his way to the Rangers. That player is Ryan Spooner of the Boston Bruins.

Get to Know: Ryan Spooner

For Ranger fans that do not know Ryan Spooner, there is a lot you need to catch up on. Spooner is a true play-making center with a good hockey IQ. His defensive game is strong but he is not the biggest of players sitting at 5’10” and 183 pounds. Over the last season, Spooner had a difficult time trying to stay in the lineup with the Bruins. He could never stay consistent and he seemed to get the cold shoulder with the coaching staff.

Trade rumors surrounded him at the trade deadline and at the end of the season. Honestly, I am surprised he re-signed with the Bruins this year. He is now on a one-year deal worth $2.825 million. In my opinion, he just does not fit their system going forward and would be really shocked if he does not get traded at some point this season. On the other hand, the Rangers could use another center on the team. 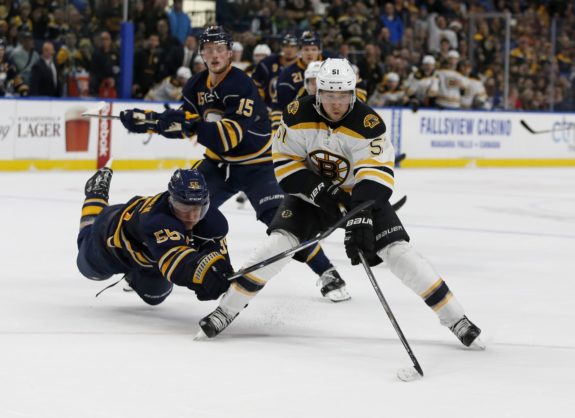 They recently lost Derek Stepan to the Arizona Coyotes leaving a void up the middle. They went out and got David Desharnais in free agency but a hole on the fourth line remains. That is where Spooner can come in. He really is not a fourth line center but for a player who needs a fresh start and can move up and down the lineup, the Rangers would be a good fit for him. He also gives the Rangers more flexibility. They can roll four solid forward lines and wear down opponents. This would be another solid addition that could give this team more depth in a long season.

Nick Holden and the Trade Rumors

There is no secret anymore. Holden is on the Rangers trading block. The Rangers got some new defensemen this offseason and it looks like Holden is the odd man out. So why would Holden go in return for Spooner? Take a look at the Bruins defence core. Their third defence pair is not the best in the league. It’s an average third pairing but could use an upgrade.

Holden played a lot of minutes for the Rangers and his experience could help this Bruins defense core. He could also provide depth for the Bruins. Holden finished with 34 points in 80 games played this past season which was a career high in the NHL for him. Injuries do occur and Holden could be perfect in the role with the Bruins. 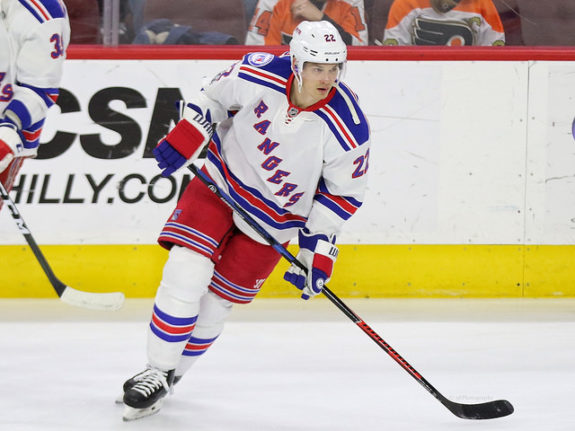 Nick Holden has been a less effective player than his offensive numbers suggest. (Photo credit: Amy Irvin / The Hockey Writers)

Either on the bottom pair or as a depth piece, he could be a solid add for the black and gold. Plus he has a cheap contract sitting at $1.65 million for one more year.  Similar one year contracts make it easier for this deal to happen. Obviously the Rangers would have to give up something else along with Holden for this to happen. I would not be surprised if a pick of some kind would be included in this deal.

When Will it Happen?

If this deal were to happen, it would happen during the season in my opinion. Spooner just signed a one-year contract and the Bruins will want to see what a fresh year could do for him. On the other hand, the Rangers would like to get a center sooner rather than later. Spooner could help the Rangers and Holden could help the Bruins right now. Both players’ values have dropped but could increase with the trade as proposed. Realistically this trade could happen. It is just a matter of time before the call is made.