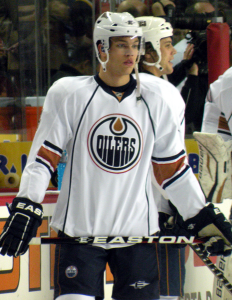 In a bizarre story that seemingly came out nowhere, Mark Seidel of North American Central Scouting realised an article attacking the number one overall pick in the 2010 draft, Oilers rookie Taylor Hall. The full story can be found here on CBC’s website[source file has been removed]. The accusations essentially surround Hall and his strong desire to wear the number 4, which formally belonged to Oiler great Kevin Lowe. Now Seidel is a highly regarded scout, not some blogger trying to make a name for himself, but the story still seems a little strange. In his article, Seidel cites that Taylor and his father Steve Hall pressure Oilers president of hockey ops Kevin Lowe to allow Hall to wear the number 4. No player for the Oilers had worn that number since the great Lowe retired. According to Seidel, the Oilers management didn’t want to give him the number, yet Hall and his father persisted until Lowe eventually gave in. Seidel gives the impression that Hall had a lack of respect for hockey history, and was indifferent to what Kevin Lowe and the number 4 meant to the Oilers franchise.

Seidel said in his article it was “no secret that Taylor and his dad operated completely on their own schedule and agenda last year in Windsor”. He didn’t elaborate on what that entailed, but it appears as if Seidel is under the impression that the Hall’s are intent to do things their own way regardless of what that might mean for the people around them. The Oilers organization has vehemently denied these allegations and is extremely upset they were presented. So why did Seidel write it?

Seidel really does a number on Hall’s apparent lack of respect of history by claiming there was a joke going around “if Boston took him, Team Hall might be the only group with enough balls to ask Bruins legend Bobby Orr himself to “unretire” the number”. Does Seidel have a reason to share this story with the world? Maybe he has some sort of axe to grind, as David Staples of the Edmonton Journal suggested.

The interesting part of all this is that Kevin Lowe seemed very pleased to give Hall his number, and certainly didn’t appear coerced in any way. But if “Team Hall” is really as ruthless as Seidel suggests, then Lowe wouldn’t have been able to act any other way. Does Seidel think Hall is living with a sense of entitlement? If so, he obviously disapproves.

Many former and current stars were outraged and spoke to both Lowe and members of the organization, but Team Hall was determined. Ultimately Lowe quietly agreed to the “transfer” of the number. In 15 years when Taylor Hall has made his mark in Edmonton and brought the organization to the heights that it once soared, perhaps all of this will be forgotten. However, this power play was invoked before he ever played a regular season game. His success isn’t guaranteed, and his supporters shouldn’t be surprised when people inside the game are quietly cheering his early season struggles.

Does Seidel seriously take pleasure in Hall’s difficulty acclimating himself to the pros? However in all honesty, Hall is faring very well, he is looking much more confident and comfortable. I’d say he’s having a fine start. But it seems as though Seidel enjoys watching the first overall pick be overshadowed by his fellow rookie teammates. So what exactly did Taylor Hall do to Mark Seidel? Hopefully more facts will continue to trickle out, because this attack on Hall’s character is strange, and unfounded according to anyone else associated with the youngster. Those who saw him in the OHL expressed that he had a very admirable understanding and respect for the history of the game. Staples also said that it was more Lowe than Hall who suggested he wear the number 4. The Oilers organization is adamantly discrediting the story. So what exactly is the truth? At this point, Seidel isn’t coming off that well, despite him being a reliable source. But there’s a reason why he wrote this. I trust we’ll find out soon.