The sick bay is getting pretty crowded over in Edmonton. Already without Ryan Nugent-Hopkins (shoulder), Jordan Eberle (knee), Ryan Whitney (ankle), Eric Belanger (leg), Tom Gilbert (knee) and Cam Barker (ankle), the Oilers will be forced to play on without another offensive threat, Taylor Hall.

There are times when teams go through streaks of terrible luck when it comes to injuries. It can seem like a curse has been brought upon the organization, and it feels like they’ll never be fully healthy. The Edmonton Oilers are currently on the receiving end of a brutal string of injuries, the latest coming in a freak accident that could have possibly been prevented. In the pre-game warm-up before their game against the Columbus Blue Jackets, Taylor Hall (who wasn’t wearing a helmet) slipped on the ice, and was cut by a teammate’s skate right over his eye. As he slid into the boards, defenseman Corey Potter had to jump out of the way, but his skate blade caught Hall. He was bleeding profusely and received 30 stitches to close the wound. GM Steve Tambellini spoke about Hall’s injury last night:

Although Hall said he was good to go, he sat out the game and will be further evaluated. The freakish incident sparked an interesting debate on the inter-webs regarding the NHL making it mandatory for players to wear their helmets during the pre-game skate. It makes sense, because there have been many instances when players have been hit with shots, or accidentally collided with teammates because of the lack of space on the ice. But, it will likely become a NHLPA matter if it gets that far. Either way, safety should always come first, and there’s a good chance Hall won’t be taking the pre-game skate helmet-less anymore.

As for the game, the lowly Blue Jackets came into the contest sitting last overall in the entire NHL, but found a way to come back against the shorthanded Oilers. Edmonton staked themselves to a 2-0 lead in the first period, only to watch it completely evaporate. Anton Lander notched his 2nd of the season to open the scoring from Josh Green and Ryan Jones. Ben Eager then put the Oilers up by two with his 5th from Jeff Petry and Ales Hemsky. But that would be all the Oilers would get past goalie Curtis Sanford. In the second, Ryan Johansen got the Jackets within one, and with less than a minute to go in the period, Derick Brassard tied things up with his 7th of the season on the powerplay. In the third, Columbus got two more, one from Derek MacKenzie that stood as the game winner, and then an empty net powerplay goal from Derek Dorsett sealed the deal. 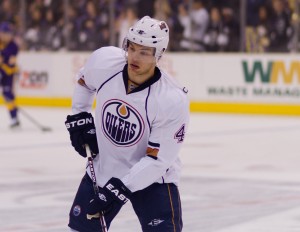 Devan Dubnyk made 21 saves in the loss, while the Oilers went 0-3 on the powerplay. No one ever likes to use injuries as an excuse, but if there was ever a game where a team could look at the guys they’re missing and say the loss was due in part to that, this was certainly the night. Luckily, the majority of the injuries are not season ending, and the press box should be emptying out soon. None too soon for the struggling Oilers.