The Pittsburgh Penguins had the distinction of starting the season with three games in Western Canada, one against a Stanley Cup favorite, two in two nights and each against a team making their season debuts before raucous home crowds. 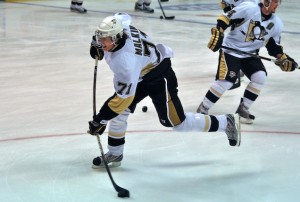 Evgeni Malkin keyed the power play in his return to action. (Flickr/FrenchKheldar)

With Sidney Crosby and Brooks Orpik missing all three games and Malkin’s absence in Edmonton Sunday, five out of a possible six points seems like a respectable start to a rough early schedule.

The Penguins return to Pittsburgh for their own home opener Tuesday against the Florida Panthers. For now, the Penguins sit atop the Eastern Conference with five standings points (and the most games played).

Some impressions from the first three games of the young season.

Scoring dried up late last season, as Jordan Staal and Mark Letestu struggled to fill the offensive void left by the injuries to Malkin and Crosby.

Perhaps no one felt that drought more than James Neal, who went from playing alongside Brad Richards in Dallas to Alex Kovalev and Letestu in Pittsburgh.

The plan since then has been to get Neal alongside Malkin or Crosby, hoping the presence of a star center would jumpstart Neal’s scoring. Though he only got two games alongside Malkin, the current top line of Neal-Malkin-Steve Sullivan has already made Neal the offensive threat the Pens traded for last February.

Neal got the power play started with the season’s first goal in Vancouver (the unit itself a huge question mark heading into the campaign), and registered two points in the two games he played with Malkin. They’re the biggest cogs on a renewed power play unit, which went 4-for-8 in the first two games but just 1-for-8 Sunday, with Geno out of the lineup.

Malkin was on a mission in his first two games, playing the key piece of a power play unit that looks dangerous for the first time in three seasons and looking every bit like the dynamic scorer who took control of the team two seasons ago.

The intangibles of his game—skating circles around the offensive zone, making zone entries on the power play, hitting the tape on circus passes—all appear to be back. His scratch from Sunday’s game is a bit concerning, but Dan Bylsma told media that Malkin “had played a lot of hockey and was a little sore.”

An area of concern? The Neal-Malkin-Sullivan line, while registering a combined five points in the first three games, are a combined minus-4, and Malkin leads the team with four minor penalties.

As mentioned, Malkin and Neal have been important players on a power play unit that went from completely inept a year ago to unstoppable in the first two games.

The unit is 5-for-16 through the first three contests (31.3 percent), but four of those goals came in the first eight chances, with Malkin on the unit. The man-advantage was just 1-for-8 without him against a defensively soft Edmonton squad, although goaltender Devan Dubnyk played a strong game.

On the other side of the special teams battle, last year’s leading penalty killing unit (86.1 percent) is again leading the league through the first few games, having killed all 11 chances against them.

The penalty kill is a known commodity. How the power play fares over the long run, especially given the presence or absence of Malkin and Crosby, will be worth keeping an eye on.

The Penguins surrendered leads in each game in Western Canada, twice leading to overtime.

The Canucks came back from a two-goal third period deficit to send the game to a shootout. Calgary netted two late goals in the third, nearly tying the game after having been destroyed in a four-goal second. Edmonton was held off the scoresheet until the final six minutes of the game, tying the game at one goal apiece and eventually sending the Pens to a shootout loss.

One-goal leads are dangerous and Vancouver is a team that can score at will, but three leads lost or nearly lost in as many games is a concern. The Penguins had their fair share of late-game collapses last season (Boston comes to mind). It’ll be something the coaching staff will want to address.

The team’s top defenseman, Kris Letang is off to another scorching-hot start to a season. Letang has a power play goal and three assists in three games, tied for the league lead in points and tops among defensemen.

Letang got off to a Norris-caliber start last year, then slowed mightily once Malkin and Crosby left the lineup.

Where Letang got into trouble by trying to do too much late last season, he has appeared capable of doing absolutely everything so far. Letang was by far the best player on either team in Edmonton, tallying a power play goal and leading more offensive rushes than any of the team’s forwards.

The key for Letang this year will be to sustain his strong play over the course of all 82 games.