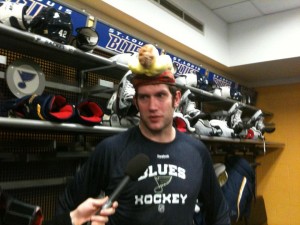 David Backes, sporting the new "weenie hat," had 4 points to lead the Blues to a 4-2 win over Buffalo Saturday. (Jeff Ponder / THW)

It’s the same at any job; if you put in your dues, you will be rewarded.  That’s the mentality in the St. Louis Blues locker room as well.

But instead of receiving a bonus or even a pat on the back, you may be forced to wear a weenie on your head.

Many NHL teams have ways of displaying a “job well done” to their hardest-working player in any given night.  The Capitals made their hard hat famous in last year’s installment of “24/7,” while the Boston Bruins gave a starter jacket to the player most worthy during their 2011 Stanley Cup run.  The Pittsburgh Penguins even give a shovel to their best player, which is decided by the winner from the previous game.  The Blues have added their own tradition this season, bestowing a “weenie hat” to the player that best exemplifies a hard night’s work.

Saturday, after the Blues beat the Buffalo Sabres at Scottrade Center, the hat was revealed to the media.  David Backes had two goals and two assists for the evening and was the obvious choice for the weenie hat winner.  Backes decided to keep the hat on for his post-game interviews.

“A little bit of an inside job for our locker room,” Backes said, wearing the hat while cameras flashed in the background.  “Some of the heart and soul guys came up with it.  Instead of the hard hat we get the weenie on the head.”

Jaroslav Halak, who saw a 164 minute, 38 second shutout streak snapped in the first period, revealed that he had won the weenie-of-the-game award two games before when he shutout the Dallas Stars, 1-0.  He explained that he was a little shyer than Backes to wear the hat in front of the television cameras.

“[The hat is] beautiful but… I mean, come on,” Halak said between chuckles.  “I’m better than that.”

The Blues’ locker room has displayed a much different atmosphere since the start of the season.  Music could not be heard playing from the loud speaker and enforcer Ryan Reaves could not be found poking fun at his teammates.  It was a very droll setting just a few short months ago.  Then Ken Hitchcock took over the coaching duties and a different buzz could be heard in between periods and after games.

Now, the Blues are rolling and have been battling for the top spot in the NHL.  The Blues currently are just one point behind the Detroit Red Wings to lead the league in points and are tied with the Chicago Blackhawks, New York Rangers and Boston Bruins for second place.

Backes, who was named the 20th captain in Blues history at the start of the season, attributes the success to a team-game that includes outworking their opponents. 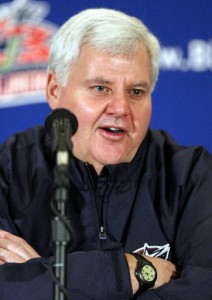 Head Coach Ken Hitchcock is 23-5-6 with the Blues since taking over on November 6.

“We know if we execute well and we’ve got 20 guys going in the same direction that [we’ll get] good chances,” Backes said.  “We’ve proved to ourselves that we can do it and we don’t say every night that we’re going to win this game but we know that when we play our game and play the right way [that] we give ourselves a great chance.”

Even with a positive atmosphere and a strong team work ethic, Coach Hitchcock strives for more from his team.

“We’re going to have to push people a little bit further up the mountain here if we’re going to get to the next level.”

The results have been astounding and the locker room has not been this joyous since before the lockout in 2004-05.  Weenie hats can only be part of a team that is playing to its potential.  Nobody wants to award a player after a losing effort.

“It’s good to have and we definitely want to make sure it’s getting a lot of airtime,” fourth-line mucker B.J. Crombeen said of the hat.  “We’re pretty excited about it.”