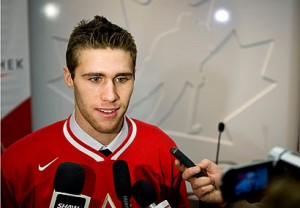 The list came out on Monday. It’s the list that every young hockey player dreams to be on. For some, dreams were crushed (McKegg, Percy, Subban). For others, this is just the beginning.

Team Canada will only have three returning players this year. Quinton Howden, Jaden Schwartz, and Mark Visentin will be looked at as the veterans of this year’s group. Howden, who currently plays for the Moose Jaw Warriors of the WHL, is a Florida Panthers prospect. Schwartz is playing at Colorado College right now, and was a Blues first-rounder in 2010. He’s seen as the leading candidate for captain at the moment. You’ll probably remember Visentin from the gold medal game collapse against Russia in last years tournament. The Phoenix Coyotes prospect and current Niagara IceDog is arguably the top goalie in the OHL, and he’ll be seeking revenge in this years tournament. The starting job is his to lose, but he should start the majority of Canada’s games.

Here are some quick stats to consider when looking at Canada’s selection camp roster:

A lot of the names on the selection camp roster might not be familiar to you, but just because they aren’t household names yet doesn’t mean they won’t be by the end of the tournament. Those who make this team will instantly become national role models, and they’ll be looked up to by nearly all young Canadian hockey players. Many players who were expected to be available for this team aren’t anymore, as they’ve made great impressions in the NHL. It’s very unlikely that more than one player will be released from their pro club to play in this tournament. Ryan Nugent-Hopkins? Not happening. Ryan Johansen? No way. Sean Couturier? Nope. Brett Connolly? Maybe. Two question marks still remain though: Erik Gudbranson and Devante Smith-Pelly. Hockey Canada is hoping that at least one of them will play for them in Alberta, and Smith-Pelly is probably their best bet. The only reason he would be released from the Ducks is likely his stats (two points in 21 games with Anaheim so far), because his game itself has been fine. Devante was a force in the summer camp, and Team Canada would love to have him, but he won’t be included on the projected roster below. It sounds like Gudbranson is likely to stay with the Panthers, but he would immediately become Canada’s top blueliner if he’s released to play in the WJC. 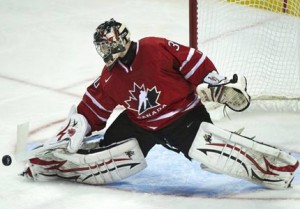 At a glance, it’s easy enough to determine which players are legitimate contenders, and which ones are a step below the rest. That makes it easy enough to eliminate a few players. On defence, Brenden Kichton, Joe Morrow, and Alex Petrovic aren’t likely to last very long, so we can cross them off. Up front, Phillip Di Giuseppe, Phillip Danault, and Michael Ferland can also be cancelled out. Choosing the goaltenders will probably be one of the hardest decisions to make in camp. Tyler Bunz, Louis Domingue, Visentin, and Scott Wedgewood are all top of the line goalies, and other than Visentin (he’s a lock), their performances in camp will likely decide their fate. There’s really only one spot available in the crease, and right now, Louis Domingue has the edge.

With all that in mind, here is Team Canada’s projected starting roster for the 2012 World Junior Championships:

With the depth of Canadian talent available for this tournament, it doesn’t seem necessary to have more than two draft eligible players on Team Canada. As a result, defencemen Cody Ceci and Mathew Dumba have been left off my projected roster. If Huberdeau’s injury prevents his availability, look for either Boone Jenner or Ryan Spooner to get the call.

Feel free to comment below with your ideas. It should be a great tournament.

Golden Knights 3-for-3 On Critical Homestand

Coyotes Weekly: Gearing Up for the Trade Deadline

Avalanche Battle to Remain in Top Three of Western Conference