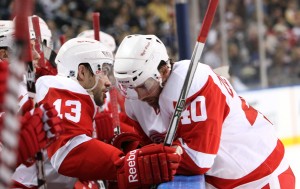 Darren Helm talks with Zetterberg. The Detroit Red Wings certainly have lots to talk about after their embarrassing 7-2 loss to the Montreal Canadiens. The loss dropped their road record to 13-14-0. (Icon SMI)

Well, it was definitely one of the roughest games of the year.

Detroit Red Wings coach Mike Babcock summed it up properly: “I’m not going to watch any video at all. I’m going out for a drink.”

Maybe it was the absence of Nik Lidstrom. Maybe they were looking ahead to the all-star break. Whatever it was, the Red Wings looked absolutely awful last night against the Montreal Canadiens.

Statistically, the Wings are the best team in NHL. But last night, they looked like couldn’t have the Habs farm club, the Hamilton Bulldogs.

It all started horribly. The Wings allowed, of all people, Scott Gomez to skate end-to-end and make a cross-ice feed to Rene Bourque to give them a 1-0 lead. Don’t get me wrong, it was a nice play by Gomez but he took the puck at the Habs goal line and blew past Drew Miller. Then, he skated around the usually physical Brad Stuart. Then Niklas Kronwall was overpowered by Bourque. It just looked soft from one end to the other.

Then another goal goes off an Alexei Yemelin point shot beat Jimmy Howard. Two more goals would be thrown past Howard and the Canadiens were ahead 4-0 at the end of the first period.

If the Wings were hoping for a change of pace by putting Ty Conklin in goal in favour of the shelled Howard, that was quickly put to sleep. Conklin let in his first two shots. 6-0. Just flat-out embarassing.

The Wings would get two goals from Jiri Hudler in the third but Erik Cole added another goal for a 7-2 final.

To see highlights of this travesty of a performance, check out this video.

This loss frightens me. The first-place Wings  looked terrible against a Habs outfit that, coming into the game, was 10 points out of a playoff spot. They lost every puck battle, didn’t get goaltending and defensively, were as soft as whip cream. There is no way that all of this can attributed to the absence of Lidstrom. He’s only one player and a team should be able to survive without their captain.

Again, this all heads back to their road play. This loss leaves them at 13-14-0 on the road heading into the all-star break. Of the top 10 teams in the league right now, the Wings and St. Louis Blues are the only teams that have under .500 records on the road. Going forward, this really needs to be addressed because teams don’t get far in the playoffs without winning on the road. If you look back over the last four years, the team that has won the Stanley Cup has won it on the road:

Road wins matter. Right now, this is definitely something lacking away from the Motor City.

Senators’ All-Time One and Done Goalies