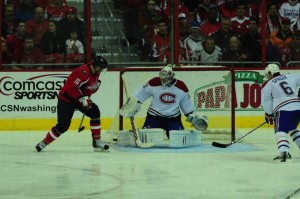 Montreal will play host to the Capitals at 7.30pm EST. (Tom Turk/THW).

He’s making a new start, in a new city, with a new team. But for Canadiens’ power forward Rene Bourque, it’s the same old song and dance.

In just his second game as a Montreal Canadien, Bourque will be faced with the unique challenge of playing against an aggravated Washington Capitals squad, who no doubt remember exactly why they are without their current scoring leader.

Nicklas Backstrom left Washington’s January 3rd match-up against the Calgary Flames with concussion-like symptoms after receiving a flagrant elbow from Bourque as the plasyers crossed paths in the neutral zone. He has yet to return to the line-up and is expected to miss at least another two weeks.

Bourque has repeatedly apologized for the incident, which was essentially his last substantial action as a member of the Calgary Flames, but has no disillusions about the reception he expects when the Capitals face off against the Montreal Canadiens at the Bell Centre this evening.

“I’m sure I’ll get hit a lot, and there’ll be a lot of talking on the ice…” said the newly acquired Bourque. “Whatever comes my way, I probably deserve it.”

After serving a five-game suspension for the incident, during which time he was dealt to Montreal, Bourque was back on the ice for the first time this past Sunday as the Canadiens skated to a 4-1 victory over the league-leading New York Rangers.

For better or worse, Bourque’s reputation precedes him in Montreal. His 41 minutes in penalties this season instantly catapults him to second on the Habs’ roster, trailing only PK Subban for the team lead.

For a team mired in physical inadequacies over the past several seasons, Bourque’s net presence and north-south style of play represent a refreshing change to the steady diet of fluff to which Habs’ fans have become accustomed. Despite the inspired play of prized off-season acquisition Erik Cole and the continued development of Max Pacioretty, the Canadiens often found themselves over-powered in crucial situations early in the season. 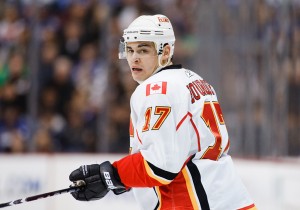 Bourque was suspended 5 games for his elbow to the head of Capitals forward Nick Backstrom.(Icon SMI)

given night. Factor in the unanticipated consistency of 6’4, 218 lb youngster Mike Blunden, whose recent play has earned him a regular place on the fourth line, and the Canadiens are no longer the physical pushover they were when the season started.

They may not employ a professional pugilist like John Erskine, who will undoubtedly dress tonight for the Washington Capitals in response to Bourque’s recent arrival in Montreal, but the Canadiens now have the option of a gritty physical presence at all times without having to sacrifice offensive production to get it…

Tonight’s contest will provide the new-look Canadiens a golden opportunity to showcase the tenacity and discipline with which they will need to compete in a Northeast division where the big, bad Boston Bruins set the standard of play.

With eight of their next nine games coming against the six teams directly in front of them in the Eastern Conference standings, the Canadiens’ next three weeks will likely decide whether they are competing for a playoff spot or draft pick come early April.

Odds-makers give the club little more than 15% chance of making their fifth consecutive post-season appearance, but with tonight marking the first in a large cluster of proverbial “four-point” games, one would be wise to reserve judgement for mid-February.

If the past few years have taught us anything, it’s that the NHL season has a full 82 games for a reason.