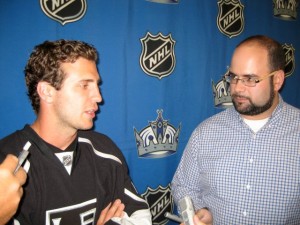 Mike Richards scored two points in his Kings debut, a 3-2 win over the Rangers (Photo by Charles Smith).

LAS VEGAS- The Kings concluded their preseason schedule with special exhibition games in Las Vegas and in Hamburg, Germany.  Their yearly Frozen Fury event in Vegas provided yet another opportunity for fans to experience a festival-style event after their annual Hockey Fest in Los Angeles.

The festivities culminated in an exhibition game against the Colorado Avalanche that gave fans of both teams a solid look at their squads’ opening-night rosters, minus the recently re-signed Drew Doughty for the Kings.
The Kings traveled to Europe immediately following a 4-1 loss to Colorado, a lackluster performance coming off an exhibition win over the Ducks in Anaheim the night before.  In Germany, they rallied from a 3-2 deficit to defeat the DEL’s Hamburg Freezers 5-4 before a crowd elated to see elite-level ice hockey in their home arena.Los Angeles opened its regular season schedule in Europe as well, playing back to back nights in Stockholm and Berlin  They split the contests, winning 3-2 in overtime against the New York Rangers and falling 4-2 to the Buffalo Sabres.

Their home schedule will not begin until October 18 against the St. Louis Blues, with a two-game East Coast trip this week in New Jersey and Philadelphia.

1. Matt Duchene, COL, who scored twice, including a goal that opened the game’s scoring and put-away, power-play goal that sealed the victory.  Duchene toiled in relative obscurity last year thanks to an abysmal finish for the Avs but he has continued his own rapid development into a top-flight pivot.

2. Erik Johnson, COL, who was arguably the most active player on the ice displaying the mobility and fluidity that have made him one of the most coveted young defensemen in the NHL. He contributed two assists, skated at +2 and was on the ice for three of the four Colorado goals.

3. Simon Gagne, LA, the Kings’ lone goal-scorer who provided elusive stability in a game riddled with errors and lethargy.  Gagne, an outstanding two-way winger, steps in as a top-six forward that boosts the Kings team speed considerably.

1. Brad Richardson, LA, who scored the game-winning goal.  Richardson carried strong development through last season, the playoffs and the early going of this year.

2. Anze Kopitar, LA, who knotted the game at three and swung momentum in favor of the Kings. Kopitar has returned from a serious leg injury last season after a successful rehabilitation in his native Slovenia.

3. Drew Doughty, LA, who returned to action following an extended contract dispute that kept the restricted free agent out of camp.  Though he may not have been at full blast, the sight of No. 8 in uniform solidified the Kings plans for the coming season.

1. Mike Richards, LA, whose late goal forced overtime, where his powerful, graceful setup of an activated Jack Johnson won the game for Los Angeles.  Acquired in arguably the biggest trade of the offseason, Richards provided the 1-2 punch at center the Kings expected with his acquisition and the return of Anze Kopitar.

3. Anze Kopitar, LA, who was razor sharp in his first regular-season game since sustaining serious ankle and leg injuries in against Colorado late last season.  He contributed a goal to open the scoring and the secondary assist on the game-winning goal.

1. Luke Adam, BUF, who struck twice in a 2:20 span to send Buffalo off to the races.  Adam had been a dominant AHL player and now will figure significantly into a heavily renovated Sabres lineup this season.

2. Anze Kopitar, LA,  who continued his strong play by scoring both Los Angeles goals.  Showing no signs of wear, Kopitar logged over 24 minutes of ice time, a game-high for forwards and second only to Drew Doughty’s 28:45 among all skaters for either side.

3. Ryan Miller, BUF, who turned back 31 of 33 L.A. bids in his impressive performance in net.  Despite a 4:30 A.M. arrival in Berlin, he and the Sabres were hardly sluggish, shooting out to a 3-0 and never looking back thanks for Miller’s slamming the door repeatedly.