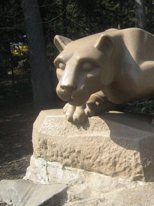 The Joe Paterno who faced the press in late 2011 brought to mind an editorial cartoon about the late Shah of Iran circa 1979.  The cartoon depicted the deposed Shah regarding Earth as it loomed in front of him.  Slightly to the right and pointing away from the planet was a sign that said “You are here.”  As a statement about the Shah’s situation, it also speaks to the state of anyone who has enjoyed decades  -sometimes almost a lifetime- of uninterrupted power and influence.  In 2011, Paterno, who had built a program whose public face was associated with more integrity in a single department than most of the rest of the NCAA, saw everything he had built destroyed, not by what he had done, but what he didn’t do.   Paterno, whose name was gold in American sports found himself like the Shah in that cartoon, facing a world that he once owned but was now hostile.

Many pundits referred to Paterno’s dereliction of duty as function of his being a product of his time rather than a moral failure.  This would be understandable if this had happened, say, in an earlier time, maybe around the time the aforementioned Shah found himself to be a man without a country.   Even though there was a perfunctory investigation, there was no change in the access to resources and influence that the key players in this drama continued to enjoy.  The coach who stood before the swarm of reporters who had traveled to Pennsylvania to bear witness to his reaction as  his and the program’s image collapsed around him was defiant, almost leonine in the ferocity with which he defended himself. As many would argue later on, this was a matter to be handled quietly, behind closed doors.  One didn’t talk about those things.    The problem was that incident in question, which turned out to be part of a larger pattern that had been observed over the years, took place in 2008.

In an age when child safety has been a permanent feature of discourse in academic institutions for at least three decades, would, or more importantly should someone have been able to claim the kind of tunnel vision that Paterno’s defenders offered as a defense for his lack of ownership, or even more chilling,  his lack of conscience  when faced with the troubling information that a monster like Jerry Sandusky was allowed free run of the facilities and the carte blanche that association with Penn State Football afforded him.  What does it say about Paterno, (who had claimed that he and Penn State Football were one and the same) that Mike McQueary, who witnessed Sandusky’s abuse would walk away from a child in peril and keep his job.

The post-mortem canonisation of Paterno was inevitable.  It is natural to want to look fondly on those who slip out of our grasp.  The collective heartfelt beau geste that sports fans now offer in Paterno’s memory is hardly misplaced.  It does, however, merit closer examination.  Are we really mourning the passing of the Joe Paterno who declared his sin of omission was no sin at all or are we mourning the loss of the legend?  Fans of Paterno, and I was one of them, want to believe that the touchstone of Penn State’s greatness was Joe Paterno.  We wanted to believe that the goodness, the magic associated with PSU Football was as real.  We needed then (and need now) to believe there is such a thing as a sports hero.  Was there greatness in the Penn program?  Absolutely.  It can be found in the spirit of every young man who ever wore a Nittany Lions jersey.  It should not be forgotten that the greatness those men brought to Penn State was something they possessed already; but it took Paterno’s influence to bring it out.

What do we make of Joe Paterno?  As he is bid to rest in peace by admirers, the victims of his staff know only the unrest of spirits ripped to pieces by the horrific crimes of one person who was rotten to the marrow and those who didn’t move to stop him.   What should Paterno’s legacy be?  To deny everything that came before the scandal is to deny the young men who put body and soul on the line for the love of the game.  To gloss over the horrific way it all came crashing down denies Sandusky’s victims.   In the end, maybe all we can do is honour the honourable and mourn the rest, leaving forgiveness to those whose place it is to forgive.