Every sport has it’s offseason, and with fewer stories, it’s a perfect time for making lists. In the case of the NHL Network, they produced four lists of the league’s top players, by position. And if the NHL Network is putting out lists, you can pretty much bet San Jose Sharks fans (and others) will be outraged by who was overlooked.

How the Sharks Fared

The Sharks had none of the top 20 wingers, nor a top ten goalie. Neither of these should come as a shock. The Top 20 Centers list also failed to include any Sharks.

While some Sharks probably have a case to be on these three lists, none have an overwhelming case. Center Logan Couture is probably the closest, but I’d have a hard time moving him ahead of all but a couple of the players on the network’s list.

Only one Sharks player made a top 20 list, and he was on the list for defensemen. Brent Burns was rated as the fourth best. Alas, Burns was overrated (due to even strength liabilities) while his teammate, who had a better season, was ignored. This is really the lone meaningful beef Sharks fans might have.

Sharks fans were perplexed (and a few outraged) by the exclusion of Marc-Edouard Vlasic. It’s always unsurprising to see Vlasic, a defense-oriented defenseman left off of what are, unfailingly, offensive-oriented lists.

How critical is the power play to making this list? Very. All but two players on the Top 20 Defensemen list also ranked in the top 30 in power play time-on-ice (the two who didn’t, Ryan Ellis and Charlie McAvoy, each missed a large number of games). Bottom line, the list was, once again, tightly correlated to the power play.

Interestingly enough, though, one could make a case for Vlasic’s inclusion based on even-strength offense. His 11 total goals tied for 21st overall among the league’s defensemen, but is 13th best among the 20 defenseman group (including besting two of the top five – Drew Doughty and Erik Karlsson). On even strength goals, he fared even better. His 10 even strength tallies were tied for twelfth best in the league. But among those on the Top 20 Defensemen list, Vlasic inserts into the seventh spot (including besting three of the top five – Karlsson, Doughty and Burns); just one goal behind the three-way tie for fourth place. 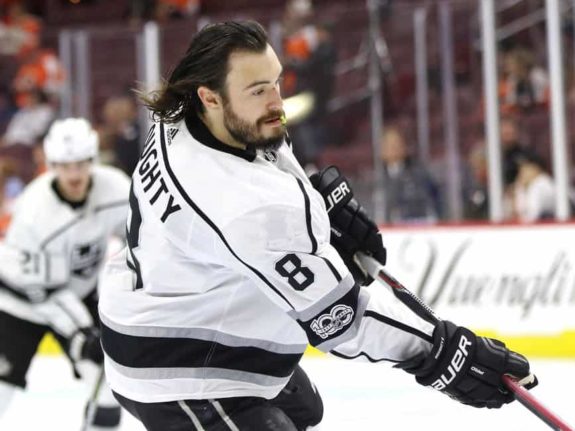 Drew Doughty was second on the Top 20 Defenseman list, though he produced fewer even-strength goals than Vlasic (Amy Irvin / The Hockey Writers)

Vlasic’s meager power play point total, three, made him too easy to overlook (Burns was second in the league in power play minutes, Vlasic 77th). In even strength scoring, Vlasic finished tied for 21st overall, which would be good enough for 14th best on the Top 20 Defensemen list.

Vlasic’s reputation is as an elite defensive defenseman. Many are, too casually, overlooking his offensive contributions. His snub is pretty much an annual event. With the list so overwhelmed by power play scoring, almost every other aspect of a defenseman’s game falls away.

There isn’t a general manager in the league who isn’t aware of Vlasic’s excellence. If he hit free agency, he’d be pursued by every team in the league. Which is why Sharks general manager Doug Wilson wasted no time re-signing Vlasic to a long term deal last offseason. The Sharks had a 365 day window to re-sign Vlasic, the deal was done on day 1, before lunch.

If there is a bigger picture to all these lists, with 70 players in total but just one Sharks player, it is this. The Sharks, to be successful, must be a ‘sum-of-all-the-parts’ team. No single player can carry them, they must embrace being a team.

Sharks fans know the NHL Network blundered in their assessment of Vlasic. They also know it’s far better to have Vlasic on the Sharks than on the list.

• While we’re on the subject of Vlasic, I figured it’d be a good moment to highlight his overtime winner against Anaheim, a terrific diving score. In the postgame interview, Vlasic aired his confidence, saying he knew he could outskate the Ducks’ defender on the play, Corey Perry.

• While Vlasic was being overlooked for a not particularly important honor, a former Sharks player and current development coach appropriately nabbed a pretty nice honor. Goalie Evgeni Nabokov, the Sharks record holder for almost all team goalie records, will enter the San Jose Sports Hall of Fame. He is the fifth member of the Sharks family to earn enshrinement (which comes officially in November), following George Gund (the original team owner), Doug Wilson, Owen Nolan and Arturs Irbe.

• Back in April 2017, I wrote an article suggesting the Sharks aggressively pilfer the fan base of the Oakland Raiders. The Raiders will be moving to Las Vegas in the near future. Since the article, the Raiders have fired their excellent and popular play-by-play announcer and replaced him with a big name who is far past his prime (and he wasn’t great, even then). This week, the team traded away their best player for high future draft picks. As the Raiders turn their back on Oakland, the Sharks pilfering efforts (tepid as best as a I can tell), should pick up steam.