The Stars have not shined early of late.

On Monday night the Toronto Maple Leafs capitalized on a 2-0 lead and held off the late Dallas Stars surge to clinch a 4-1 victory. Dallas rallied in the second period, scoring one goal and cutting the lead to 2-1–but the Leafs took advantage of a pressing Dallas squad. In the second and third periods the Stars displayed passionate and consistent play, but it was their early play that seemed to bury the team. The game against the Maple Leafs was no fluke–it was almost a carbon copy of the previous two games where the Stars displayed a lackluster performance in the first half of the game only to fall behind by two or more goals. 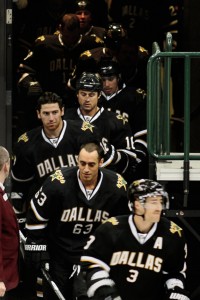 The Stars have had a difficult time showing up for games lately. (HermanVonPetri, Photoree)

After trailing 4-2 against the San Jose Sharks the Stars roared back to tie the game. James Neal and Mike Ribeiro scored with under two minutes to play to tie the game at 4 and send the game to overtime. Midway through the extra period Ribeiro tallied his second goal of the game and the game-winner. Those two goals were Ribeiro’s first of the season and it seemed the second-line center was saving up for just the right moment. Even though Ribeiro tallied 15 assists, the back of the net constantly eluded him. If Ribeiro has broken out of his slump, it would be positive news for a team that has regularly relied upon its top-line for most of its offense. Nevertheless, even with Ribeiro coming through in the clutch, the Stars were forced to bail themselves out of their subpar early play.

In their next game against the Colorado Avalanche the Stars relinquished three goals to fall behind 3-0 early in the second period. Trying to reach into the bag of tricks that saved them in the previous game, the Stars scored two quick goals only 30 seconds apart to cut the lead to one. Halfway through the third period the Stars tied the game when James Neal took a pass from Steve Ott and Stephan Robidas on the power-play. It seemed Dallas had found a way to repeat the comeback of their last game. Continuing his strong play, Mike Ribeiro scored the only shootout goal for the Stars; but it was for nought. In round five of the shootout Kevin Porter beat Kari Lehtonen to win the shootout. It was a great comeback by Dallas and the single point was well earned, but the Stars dug themselves into an early hole once again.

The inadequate start in Toronto also represents how the Stars have recently opened games. After falling behind, Dallas poured the pressure onto Toronto goalie Jonas Gustavsson and the Maple Leafs in the final period, but Toronto withheld the flurry and Dallas ultimately ran out of time. The best teams in the NHL find a way to play consistently for 60-minutes night in and night out. Earlier in the season the Stars displayed this sort of play, and their record reflected it. Of late however, the Stars are lucky to put together 30-minutes of solid play.

Dallas finds itself in perhaps the toughest division in all of hockey. Even with a winning record of 10-8-1 the Stars are in last place in the Pacific Division. If Dallas hopes to rebound, they will need to display stronger play early in games.