The Chicago Blackhawks went into Nashville on Saturday evening and took home a 2-5 loss against the Predators, a Central division rival. Goalie Corey Crawford gave up the first 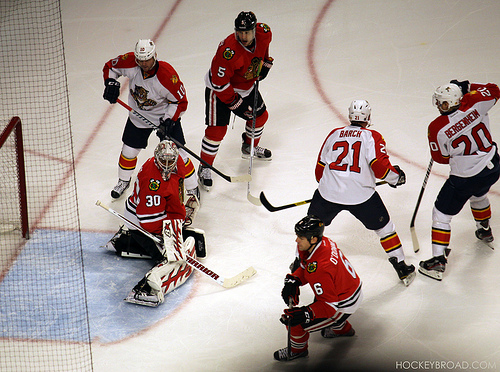 four goals, including a groaner of a goal from the red line that was the result of a quirky bounce, before getting pulled in favor of Ray Emery, who gave up one more in the final 22 minutes of play.

Crawford struggled in mid-November, and his game-to-game stats have been all over the map this year, which, with the trade deadline looming, suddenly has people wondering if he should potentially be traded. This sort of speculation is panic speaking, and right now, primary team issues for Chicago are far deeper than just one of their goalies.

Ray Emery has played half as many games as Crawford, and his record is 11-3-2/.907%/2.57 GAA to Crawford’s 18-11-4/.902%/2.88. It’s incredibly easy to point towards Emery and say he’s the better goalie due to stats, but Emery’s also had two games with 5 goals allowed and one with 7. Given Chicago’s history with goalies over the last several years, it’s very easy to reach for the “goalie controversy” discussion, so no surprise that people are being hasty to call for a “goalie controversy”.

The thing is that the “goalie controversy” is not “who’s the #1 starter”. Chicago has made it clear that Crawford holds that title. The Blackhawks have spent several years grooming Crawford in their system, they rewarded him with a solid contract this past summer, and they’re not going to toss him out the door for his struggling over the past several weeks. Those outside the team are not going to be privy to the reasons he’s struggling, but whatever the reason, it is no doubt being addressed.

At any rate, a goalie trade is extremely unlikely. Ask yourself: who would the Blackhawks possibly target? If they’re any good, think about what that particular goalie means to their existing team, or what it would cost to acquire them. Cory Schneider? Do you think Vancouver would give up their starter-quality backup without getting an incredibly expensive piece back? Ryan Miller? The Blackhawks aren’t about to take on his salary, and besides, he has his own goalie issues this season. Nabakov, Bobrovsky – anybody you can name either is currently vital to their own team’s playoff hopes, or would be far too expensive to acquire. Nobody’s going to give up a good goalie to a potential playoff competitor at this point in the season without getting more than just prospects and draft picks in return.

As for goalie prospects within the Blackhawks’ system: top prospect Alexander Salak (acquired in trade from Florida over the summer) is still on IR after a leg/ankle injury sustained earlier this season. The goalie who’s getting it done in Rockford right now isn’t even signed to a two-way AHL/NHL contract — it’s Carter Hutton, who’s on an AHL contract, and who also spent part of the season with Chicago’s ECHL affiliate. Hutton played as backup to Antti Niemi for San Jose last spring when Antero Nittimaki was injured. (It should be noted that Hutton never actually got to play in an NHL game; the Sharks rode a white-hot Niemi throughout the spring and into the playoffs.) If – and this is a BIG “if” – Crawford or Emery got injured or was otherwise sick, it’s a big question mark as to who would come up from Rockford to help fill in. And maybe, at that point, the idea of acquiring a “rental goalie” for the end of the season might come up.

How readily people are willing to talk trading goalies in a panic if a goalie shows signs of struggling. (Patrick Kane is having a scoring slump, too – should he be traded?) It’s even more surprising when a team is in a constant dogfight for first not only in their division but their conference and the league. It’d be far more understandable if Chicago was doing as badly as say, Columbus. But they’re not; they have 64 points and are definitely in a far better position for the playoffs than they were last year.

One of the things that Chicago really should be worried about at this point is the remainder of their schedule. Of their 33 remaining games, just 5 are against Eastern Conference teams. Compare that to their other Central division rivals who are in position for playoff spots: the Predators have 7 games against EC teams, while the Blues and Wings have 8. Not only that, but the Blues still have 4 games to play against Columbus, and it’s far more likely they’ll win 3 or 4 of those. Eastern losses don’t hurt so much because there isn’t the added sting of helping a conference rival gain two points.

An interesting stat jumps out from the season statistics. Last year at this time, Chicago had posted 3 shutouts (vs. Edmonton 5-0, Islanders 5-0, and Colorado 4-0 – two of those were Crawford’s) and only been shutout once, a 0-3 loss to Vancouver.

This year, the Blackhawks have not recorded a single shutout. On the other hand, they have been shutout no less than five times: starting with a 0-3 loss to Carolina in October, and most recently a 0-4 loss to Colorado on January 6th. In between, they registered goose eggs against St. Louis (0-3), San Jose (0-1), and the Kings (0-2).

What teams are dominating others with shutouts? St. Louis leads the pack with 9 (Elliott 5, Halak 4), which means they’ve been shutting out other teams every 5th game on average. Boston has 7; and Detroit, LA and the Rangers all have 6.

Teams can make it to the playoffs without shutouts in the regular season. They can even go deep. But shutouts are perhaps the best indicator for the ability of your goalies to steal games for you, and that just hasn’t been happening for Chicago this season. (The closest Chicago came to one was the December 16th game vs the Ducks, when Teemu Selanne finally got Anaheim on the board with just 1:47 remaining in the third). Yes, there are definitely games that both goalies have held the team in long enough, but Chicago has the 6th-worst GAA average in the west. Who are they ahead of? Colorado, Dallas, Edmonton, Anaheim and Columbus – and 4 of those 5 times will likely not make the playoffs. Yes, Chicago should definitely be worried that neither goalie has “stolen” a game for the team since early in the season.

While Chicago’s defense is significantly better on paper than it was last year, it struggled out of the gate in October, and still continues to constantly have gaps. Breakaways by the opposition are far too common; it’s too easy for other teams to set up camp in Chicago’s crease area. It isn’t simply the defensemen, however – the whole team needs to work harder at preventing those breakaways, clearing the crease, and clogging lanes and pushing shot opportunities to the outside.

When the Blackhawks are having an “on” night, it really is a thing of beauty: the team is loaded with speed and talent, and when they focus on keeping things simple, they can be scarily dominant.

The real problem: Chicago isn’t playing consistently up to their talent – in fact, they play down to other teams’ talent level all too easily, which means they’re not dictating the game pace. The first time they were shutout was against the struggling Hurricanes. They nearly dropped the first game against the Panthers because the way they played made it look like they thought Florida would be an easy win. They’ve had games with solid leads that they took their foot off the gas and blew it or nearly blew it. Edmonton stomped them 9-2 in November. And let’s not forget the infamous 5-PPG game versus Vancouver on November 6th.

Although the PK has actually been quite solid as of late, it still isn’t reflected on the score sheet. Nine PPGs given up between just two games (vs. VAN and EDM) in early November continue to drag down their PK%, and that’s because the Blackhawks simply don’t commit a lot of penalties. If Chicago was PKing 6-8 penalties a game instead of just 2-3, their PK% might look more impressive than 78.2% (26th overall). Take away those two games, and Chicago’s PK looks more like 83%, but that’s just not how stats work. Likewise, when you compare Emery and Crawford’s stats, the same effect happens. Emery has played half as many games, so one very good game will impact his averages more than it does so for Crawford – which can make it feel like it took forever for him to improve his stats.

Chicago has tons of offensive talent, and it has been good to see all four lines starting to produce in Patrick Sharp’s absence. Add in rookies Jimmy Hayes and Andrew Shaw, who seem to have kick-started the lines with mid-season energy; get Sharp’s return after the All-Star Break, and if Patrick Kane continues to get hot, it makes the Blackhawks a very dangerous offensive threat going down the home stretch to the playoffs.

On Tuesday, the Blackhawks will have a chance for redemption against the Predators at home on United Center Ice before going in to the All Star Break. When they return, it’s time to hit the road for a lengthy Western road swing for the annual February “ice show” trip. The Blackhawks have spent most of December and January buoyed by the home crowds, and it is going to be vital for the Blackhawks to continue to collect points when they hit the road.

The timing of the February road trip tends to be fortuitous. The Blackhawks generally simplify their game on the road, focusing more on basics and less on flashy play; and readies them for the home stretch to the playoffs. If they can dedicate themselves to a “keep it simple”, defense-first mentality during the next three weeks, they should be able to collect more than a few wins on the road – and they can also help improve both goalies’ confidence, and maybe – just maybe – we might finally see a shutout or two.

Chicago’s number one concern as the trade deadline approaches continues to be a top 4-quality defenseman, and they’re also still interested in a 2nd-line level center. However, the most important thing is that the Blackhawks need to strengthen their defense as a whole, starting from within. And yes, the goalies need to continue to improve, too – both goalies.

If the Blackhawks can’t figure out how to start plugging those defensive holes, then the playoff run might be short – and not quite-so-sweet.