The Stars gutsy playoff run ended on a sour note Wednesday night when the St. Louis Blues dominated Game 7 winning 6-1 at the American Airlines Center. Dallas came up one victory short of the Western Conference finals despite playing without their second best player most of the (Tyler Seguin did play 15 minutes in Game 2 vs. MN) playoffs.

Stars General Manager Jim Nill shared the walking wounded list on Friday as the Stars were cleaning out their lockers. As The Dallas Morning News’ Mike Heika reported, Patrick Sharp dislocated a shoulder in the Blues series, heart and soul Super Pest, Antoine Roussel played with an abdominal strain and rugged veteran Travis Moen suffered a fractured wrist. However, it was inconsistent goaltending, defensive coverage breakdowns and lousy special teams play (15.4 PP and 73.7 PK) which ultimately ended the Stars season.

Before the start of the series this space made five bold predictions. Let’s see how many we got right.

While he didn’t have a game-winning goal, he did have the primary assist on Cody Eakin’s overtime winner in Game 4 at St. Louis. It was nice pass, though Eakin deserves most of the credit for fantastic shot placement. The Blues held Sharp to just two points (1g,1a) in the seven game series. His performance was likely affected by the dislocated shoulder. However, he gutted it out playing all seven games. Who knows what the outcome may have been had Sharp stayed healthy. 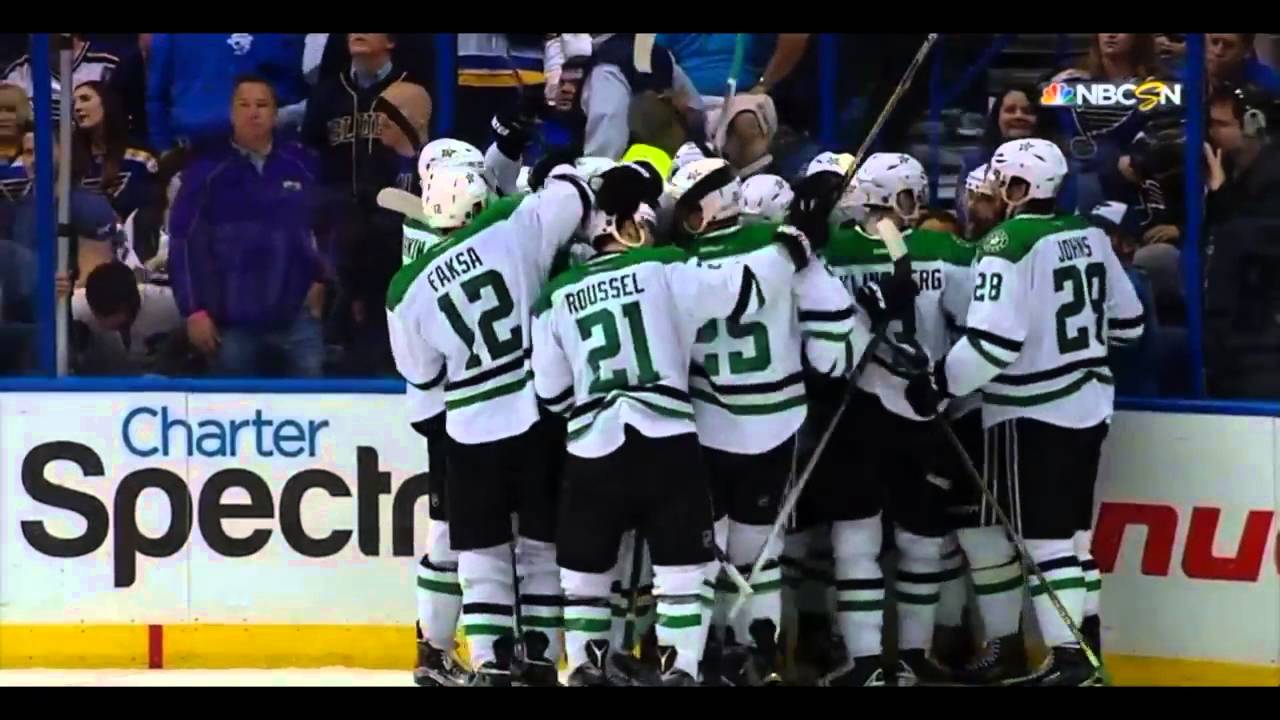 Stars Ales Hemsky Will Not Score

As mentioned in my original article, the Blues have Hemsky’s number. During the series Hemsky had 24 shots on goal. He had several excellent chances but couldn’t finish. Also, his line (with Radek Faksa and Roussel) which was on fire late in the season was inconsistent in this series. Hemsky had a big assist on Faksa’s game winning goal in Game 1, but otherwise wasn’t a factor in the series. Hemsky will be a UFA this summer and turns 33 in August. I would be surprised if the Stars re-sign him. During the regular season Hemsky failed to reach the 40 point plateau (13g, 26a).  This prediction came true.

It surprised me when Stars coach Lindy Ruff decided to scratch Sceviour after he scored the only goal in a dreadful 6-1 loss in Game 3 at St. Louis. Ruff was going for a bigger lineup but ultimately came back to Sceviour in Game 6. Sceviour responded with two assists. I don’t think Sceviour would have changed the outcome of the series, but he did have good chemistry with veteran Vern Fiddler and could have been given more of an opportunity on the second line. This prediction came true.

All Four Goaltenders will play

Blues goaltender Brian Elliott performed so well in the first five games it seemed like this one may not come true. However, after letting in three first period goals in Game 6, Blues coach Ken Hitchcock brought in backup Jake Allen. Allen wasn’t tested much, but didn’t let in any goals and the Blues rallied before losing 3-2. While this may have caused a brief goalie controversy for some Blues’ fans, Hitchcock was planning on coming back with Elliott in Game 7. Elliott responded in a big way by holding the Stars to just one meaningless goal late third period. Meanwhile, Kari Lehtonen and Antti Niemi were inconsistent throughout the series. Lehtonen was fantastic in Game 6, but came up empty in Game 7. This prediction came true.

Roussel scored the first goal of the series and was on the ice for Faksa’s game winner in Game 1. Unfortunately, he was largely ineffective throughout the rest of the series. The abdominal strain certainly affected his performance. On the other side, former Stars’ Super Pest Steve Ott only appeared in two games (Games 1 and 7). I wouldn’t say he had a direct impact on the Game 7 win, but he did deliver some crushing hits which may have been in the heads of a few Stars players. This prediction hit the crossbar.

In conclusion 3 out of 5 bold predictions came true. Maybe 3.5 out of 5 depending on the grading scale. Good numbers for a baseball batting average or clinching a best of five first round series in the American Hockey League. However like the Stars, this space came up just a little short.