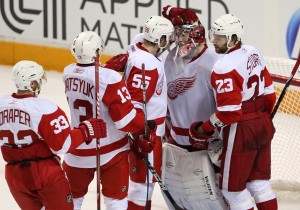 With the season now more than half over, there are plenty of Detroit Red Wings stats to examine, and as a personal statistical fan earlier today I decided to take a look and see what I could find of interest hidden in the spreadsheets compiling all the data from the season thus far. While you may have been aware of some of few of these facts, others probably flew under your radar.

0 – The number of times the Red Wings have lost in a shootout this season. The Wings have come away victorious in both of their trips to the shootout thus far. Once against Boston and again against Phoenix. The only other team yet to be defeated in the final tiebreaker is the 7-0 Colorado Avalanche.

0 – Also the number of times backup goaltender Ty Conklin has started at home this season. In 21 home games the Red Wings are 18-2-1, all with Jimmy Howard between the pipes.

1 – Times lost in overtime. The Red Wings lost to the Minnesota Wild 2-1 back on November 1. The Wings also lost to the Wild just a few days prior on October 29 by a score of 1-0.

2 – Wins for goaltender Ty Conklin. In his 7 starts this season the struggling netminder has won just twice, a shutout in his first start against Colorado and a 3-2 overtime win against the Blackhawks on January 8.

4 – The number of empty net goals the Red Wings have given up, 2 fewer than the amount they’ve scored.

4 – Times the Red Wings have won when trailing after the first period, as compared to 8 losses.

5 – Shorthanded goals against. This is tied for 23rd in the league. In contrast Detroit has only scored 1.

5 – Shutouts by Jimmy Howard. The All-Star bound goaltender has doubled his NHL totals from 5 in 2 seasons to 10 in 3.

6 – The number of games the Red Wings lost during their longest losing streak of the season. Detroit did not win a game from October 22 to November 5, when they finally beat the Ducks 4-0.

9 – The number of times the Red Wings have been outshot but still won. When the team is outshot, they have a .621 winning percentage.

10 –  The number of times the Wings have scored 5 or more goals in one game this season.

13 – Times the Red Wings have scored 2 or less goals this season. Not surprisingly, only one of those games resulted in a victory.

14 – The number of powerplay goals Detroit has scored on the road. In 79 opportunities the Wings have succeeded only 17.7% of the time.