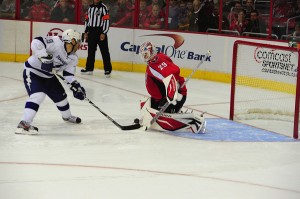 A lot went wrong for the Washington Capitals in only their second match of the season, despite defeating the Tampa Bay Lightning 6-5 via shootout in a nationally televised Monday evening matchup. Including a few fluke situations, one of those things to blame would be Tomas Vokoun’s performance in his debut as the starting goaltender.

Vokoun struggled mightily, especially early on. Just before the game was three minutes old, Teddy Purcell flicked a puck from behind the goal line, causing the puck to bounce off Mike Green’s skate and up over Vokoun’s shoulder. The Caps returned the favor not too long after Tampa’s first goal, but the Lightning struck back again with yet another shot from behind the goal line that bounced off Vokoun’s inner pad.

The long night would continue, as about 56 seconds into the second period, Dominic Moore scored on a well-set up play that would catch Vokoun off guard. Vokoun would allow two more goals before the end of regulation, the fifth goal that gave Tampa the lead also being totally his own fault.

After the game, Vokoun took a lot of the heat, saying his team “literally won today without goaltending.” However, Vokoun was also a reason they were able to still escape with the victory.

Going 5-5 into overtime due to Jason Chimera’s second goal of the night, the Caps earned a power play early on, but were forced to go down a man to play 3-on-3 hockey. The rest of the extra frame was played in Washington’s own end penalty-killing.

As shaky as Vokoun was through three periods of regulation hockey, he redeemed himself, stopping five shots, four of which came the Lightning power play. The old adage says that your best penalty-killer should be your goaltender, and Vokoun to say the least was a big factor in keeping the Caps alive despite four power play opportunities for Tampa.

Not to mention, the crazy outcome of the game was not entirely Vokoun’s fault. Aside from what Chimera referred to as “three fluky 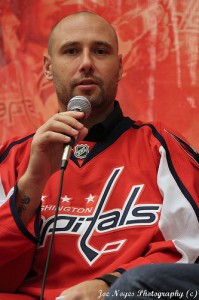 Vokoun speaking to fans at the Caps Convention in September. (jnoyesphotography/flickr)

goals”, the Caps once again committed penalties at crucial points. Washington had two too-many-men/ice penalties, one with just under five minutes remaining in regulation and the other with 52 seconds left in overtime just after killing a hooking penalty. The Caps also were unable to convert on any of their seven power play opportunities, reminding audiences of the last season’s issues with the man advantage. Overall, the Caps played a shoddy game, and barely got away with it.

A red-faced Bruce Boudreau entered his post-game press conference Monday evening after his team hardly won over their division foe, thanks to the supplemental shootout. While he was disappointed in the team’s overall performance and the difficulties caused by Vokoun’s failures, he did not hesitate to give Vokoun his credit.

“Like I said in the dressing room, if you ask Tomas [Vokoun] he’ll be the first one to tell you that’s probably not the way he wrote the script,” said Boudreau. “I guess if you’re trying to look at the big picture, it takes a guy with a lot of mental toughness to play like that,” Boudreau continued, “and then in the overtime when you’re having four-on-threes against and you make those three or four huge saves. It told me a lot about his character and it ends up as a positive things even if he didn’t have a positive game for the most part.”

It doesn’t come to a surprise to some when Vokoun struggles his first game anyway. In his career, Vokoun has given up five goals in his last three debuts (via @Adam_KOL). He occasionally has had a bad game with the Nashville Predators and the Florida Panthers. Some will take note of Semyon Varlamov’s shutout against the Bruins Monday afternoon and emphasize that Michal Neuvirth seemingly played better his first game this year, but Vokoun has plenty of time to make up for this start and help carry the team.

Notes: Jason Chimera scored the 100th goal of his career… Washington’s next game will be Thursday on the road against the Pittsburgh Penguins.