Mark Pysyk (Click on name for up- to- date stats) 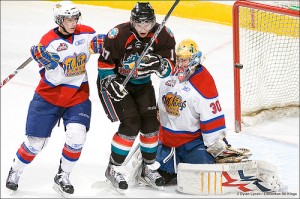 Pysyk biggest allure is his simply sublime skating ability. It’s even Niedermayer-esque. In addition he’s an extremely smart kid on and off the ice. He’s very calm with the puck and keeps the game simple, making good decisions in all aspects of the game.

The team that drafts Mark will be drafting him for the player he has the potential to be become. At worst, you likely have a smooth skating top 2 pairing blueliner that can eat up and give you solid minutes. Because of his hockey sense and hockey IQ to go with the skating, he also exhibits hints of very good offensive upside.

Scouts and GMs would prefer that he was bigger, and he does display some physical edge to his game, but he projects to be one of those efficient d-men who utilizes hockey smarts (positioning, angles and gap control) to get the job done – and completes his tasks with extreme proficiency.

“He’s just a safe, smooth-skating, first-pass guy. He’s much better when he keeps it simple. He’s not dynamic, but there are no flaws in his game.’
– A scout in The Hockey News Draft Preview 2010

“One of the better skaters you will ever see, Pysyk is a good offensive minded defender who still takes care of his own end very well. Pysyk is an example of a tremendous talent playing on a very poor team the past couple of years but has still managed to put up respectable numbers in his situation. He has great awareness with and without the puck and can be relied on to make consistently intelligent decisions at both ends of the ice.”
– International Scouting Services NHL Draft Guide 2010

“He finished the season with a broken foot and a lot of scouts weren’t able to get a good grip on how good this player’s going to be in the NHL. Smooth-skating, he has a neat knack for following up the play at the right time, leading the rush at the right time and throwing a crisp pass to one of his forwards to break out of his zone.”
– E.J. McGuire, Director NHL Central Scouting
“We’re really proud of the way Mark has developed both as a hockey player and as an outstanding member of the community. He carried our team on his back a lot of nights this winter and the fact that he played on a broken foot for a couple of games before he was forced to end his season early shows how much character he’s developed.”

Even with a limited seasoned, he was named the Edmonton Oil Kings Most Valuable Player, Top Defenseman and Scholastic Player of the Year in 2009-10.

McKeen’s: What are your strong points and things you would like to work on?

Pysyk: I think my vision and hockey sense are one of my strong qualities, seeing the ice and making adjustments and playing under pressure. The ability to move the puck on transition is another attribute. I want to work on my speed, which includes foot speed and my shot.

Scouting Combine Performance: Mark had one of the best performances at the combine in May of this year in Toronto.

His favorite number is three, but it was a number four signature that required him to wear an old jersey for his first home game after the 2010 CHL Top Prospects Game. Bobby Orr, his coach at the event, signed the jersey he had brought for the skills competition: “I had to wear my old one because the other one has a Bobby Orr autograph on it. But it’s Bobby Orr! I think I was the only guy that got it signed. But why not? I can just take the number off and have that as a keepsake.”