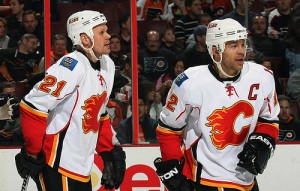 Olli Jokinen, Jarome Iginla and the rest of the Flames are about to hit crunch time. (Mark Mauno/Flickr).

Now that the National Hockey League season has progressed past the All-Star Break, the Calgary Flames have played 50 games. The team has amassed a record of 23-21-6 over the first major chunk of the season, putting the team in 11th place in the Western Conference with 52 points.

Last season, conventional wisdom dictated that roughly 95 points would be enough for a playoff berth. Calgary’s torrid second-half pace earned them 94 points, and the cut-off for the post-season ended up being 97 points. With that in mind, and 97 points being the goal, the Calgary Flames will need to earn 45 points to secure a playoff berth.

With 32 games remaining, that requires the club to win (at least) 22 of their remaining games to make the post-season. It sounds a bit daunting, but the schedule may, in fact, be on their side.

For your information, the teams Calgary will play from here on out, in order of current overall standing (best to worst):

In short: the majority of Calgary’s remaining games are [1] at home, [2] against teams that the Flames have had a fair amount of recent success and [3] rarely on back-to-back nights. In addition, the team is rapidly getting players back from the injured reserve, such as Matt Stajan, Mark Giordano and Alex Tanguay. If there will ever be a time to make hay, it will be over the next 32 games.