In the second intallment of The Prospect Panel at The Hockey Writers, our three prospect panelists Shawn Reznik, David O’Connor and Andrew Sykes, answer questions relating to NHL prospects playing in the CHL, NCAA, AHL or Europe.

This week the panel looks at  who the best defenceman is for the upcoming NHL Draft,  who the favourite to win the NCAA National Championship is, and attempts to choose between highly touted prospects Evgeny Kuznetsov and Mikael Granlund:

Who Is the better NHL prospect, Evgeny Kuznetsov or Mikael Granlund?

After watching the WJC, I realized Kuznetsov has A LOT of work to do in developing his overall game.  I doubt he will ever be a physical player but he also needs to learn that there are players on the ice called “teammates” that play just as hard as he does.  He was extremely selfish, especially during the gold medal game against Sweden.  Whenever he gained the offensive zone, he’d shoot the puck on net instead of settling the play down and looking for an opening – ie. Jeff Carter.

Mikael Granlund has almost as much finesse as Kuznetsov, but would rather notch a pretty setup as opposed to a fancy goal (disregard the lacrosse-style move he pulled in the World Championships).  On top of that, Granlund has the knack to win and the grit to propel himself to be a top line center in the NHL.  In a Finnish documentary I watched a few weeks back, he was always the best player even when he would play with kids who were 2-3 years older than him.

Oh yea, and there is that other thing about Kuznetsov playing in the KHL that might hold him back…

Andrew Sykes: If the question was “who do you think is the more exciting and offensively gifted prospect,” I would have said Kuznetsov. The Russian forward is an elite offensive talent but in terms of being a better all-around prospect for the NHL, Mikael Granlund is a better choice.

Had he decided against playing this year in Finland, Granlund could very well be playing for the Minnesota Wild right now. With an exceptional two-way approach to the game along with natural leadership and an instictive offensive ability, Granlund has the making of a Calder Trophy winner if he does indeed play for the Wid next year. While he is not quite at the level of Kuznetsov in terms of pure offensive skill, Granlund is ahead of him in almost everything else and that is what makes him a better NHL prospect.

David O’Connor: Both of these players were two of the best players in the 2012 World Juniors. Yes, Kuznetsov lit up the scoresheet a few times, but I’m going to say Mikael Granlund is the better National Hockey League prospect. Granlund has shown that he’s a leader, and on top of his offensive ability, that leadership ability is what will make him a mainstay in the NHL for years to come.

He should be playing for the Minnesota Wild next season, and I expect that he’ll make a smooth transition to the North American pro game.

Who is the best draft-eligible defenceman for the 2012 NHL Draft?

Shawn Reznik: Since watching a bit of the development camp and scouring clips upon clips of all the best defenseman heading into the draft, the one I’ve always gravitated towards was Mathew Dumba.  Murray is certainly no slouch either, but Dumba will not only contribute offensively, but will make sure to think twice before entering his zone.

His hits: shattering.  His skating: fluid.  His shot: precise.  His work ethic: tireless. The kid can do it all, which is exactly what I’d be looking for if I were a GM.  The best player you could equate his game to would be Dion Phaneuf.

Andrew Sykes: When I was first presented with this question I originally thought that my answer would be Matthew Dumba of the Red Deer Rebels, but after going over it some more I decided on a player whom I feel should be getting more praise in this year’s draft class. That player is Ottawa 67’s defenceman Cody Ceci. While the likes of Dumba and Ryan Murray are the trendy picks as the best defencemen for this year’s draft, Ceci has outplayed both of them this year.

Aside from the fact that he presents better size (6’2, 203) than Dumba and Murray, he has also proven to be a better offensive player as well. A good skater with excellent agility for his size, Ceci ranks second in OHL defencemen scoring with 38 points in 41 games and his ability as a power-play quarterback is the main reason why I prefer him over the other highly rated blueliners. Reminds me of a bigger Drew Doughty.

David O’Connor: Even though his performance against Russia in the World Juniors may not have shown it, Ryan Murray is the best defensive prospect in the draft. He’s been a rock in the Western Hockey League for the Everett Silvertips over the last few years, and is without question the top defenseman currently available for selection in the 2012 NHL Draft.

He is regularly noted for his offensive ability, and is already being called the next Scott Niedermayer. His skating ability and decision-making on the ice are outstanding, and his puck moving ability is arguably his best talent.

Murray’s a late 1993 birthday, and the extra year of junior has clearly given him an advantage over his defensive competition. Expect his name to be called in the first three or four spots.

Who is your sleeper pick in this year’s NHL Draft?

Shawn Reznik: For me it’s Belleville Bulls forward, Daniil Zharkov.  He has slowly been trucking along in the OHL with 22 points in 25 games.  Overshadowed a bit by the play of fellow teammates Brendan Gaunce, Austen Brassard and Adam Payerl, Zharkov is still an amiable forward capable of sneaking into the 1st round of the draft.

I hope to see him will his way to a tremendous 2nd half, but if not, what I deem a first round talent may slip to a very eager GM in the 2nd or 3rd round, making Zharkov this year’s steal.

Andrew Sykes: In a draft loaded with quality defencemen, there is likely to be a player who gets selected in the second or third round but ends up being a solid NHL prospect. My pick to do just that is Dylan Blujus of the Brampton Battalion in the OHL.

At 6’3 and stil filling out his 185 pound frame, Blujus is a two-way defender with good size and a developing puck-moving and offensive skill-set. The 17-year-old native of Buffalo, New York is having a tremendous season for the surprising Battalion, leading the club in scoring among defencemen, while his 27 points currently has him ninth among all OHL rearguards.

Ranked as the 52nd North American skater, Blujus is projected to fall in somewhere in the third round of the 2012 NHL Draft, but if he continues his strong play for the rest of the regular season and into the OHL playoffs, he could very well end up hearing his name called in the second round.

Though it’s more likely he’ll fall in the 15-25 area, keep an eye on him over the rest of the OHL season, because he’s really making a name for himself at the moment.

Which OHL team improved their team the most at the OHL trade deadline?

Shawn Reznik: The Sarnia Sting, I felt, made the most positive impact at the trade deadline.  They were able to acquire a solid number 1 goalie in J.P. Anderson at the expensive of an unsteady, Brandon Maxwell.

But the biggest move they made was trading Ryan Kujawinski for Ryan Spooner of the Kingston Frontenacs.  There shouldn’t be much of an argument as to who the better player is, but the Sting certainly cut into their future plans by trading away Kujawinski. 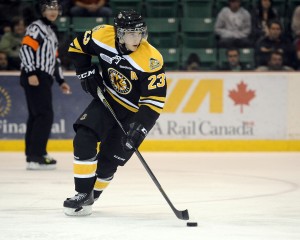 Kujawinski never really found his offensive game in Sarnia, so going out to pluck Spooner from the Frontenacs can only lead to good things.  With the exception of his rookie season, Spooner has played at over a point-per-game pace in each of his OHL seasons, and things don’t look to be slowing down as he already has 6 points in 5 games with the Sting.

The London Knights. Adding two established, veteran players like Greg McKegg and Austin Watson to an already loaded lineup further increases their chances to win the OHL title and more.

Last year McKegg scored 49 goals and had 92 points for Erie while Watson had 34 goals and 68 points for Peterborough. Mix in that kind of production with the likes of Seth Griffith, Vlad Namestnikov, Jared Knight, Andreas Athanasiou, and Max Domi and you have a downright scary group of forwards.

David O’Connor: If the London Knights weren’t considered a serious Memorial Cup favourite before the deadline, then there’s no way anyone can say that now.

The addition of Greg McKegg and Austin Watson has given them one of the top forward groups in the country. Besidse them there’s also Seth Griffith, Jared Knight, Max Domi, and Vladislav Namestnikov. Watch out for this team, because they have the talent to score a whole lot of goals.

Which NCAA team is the favorite to win the Frozen Four?

Shawn Reznik: As it stands right now, Minnesota is the team to beat.  They have one of the best records in the NCAA and everybody seems to be doing the little things right in order to win.  Much thanks to Nick Bjugstad and Kyle Rau – two representatives for Team USA at this year’s World Junior Championship – the team scores an average of 4 goals a game and has the most goals for in the WCHA.

Secondary scoring has also helped with Erik Haula, Jake Hansen, Zach Budish each eclipsing 20 points this season.  Not to be outdone, the blueliners have also chipped in like Nate Schmidt who is 3rd on the team in scoring.

All backstopped by Kent Patterson, a Colorado Avalanche draft pick in 2007, the Gophers have consistently put the best team on the ice year round and look to improve their already solid record.

Andrew Sykes: My pick to be crowned NCAA National Champion is the Boston College Eagles.

Currently the third ranked team in the nation, the Eagles feature a number of top NHL prospects and have a strong leadership core led by USA World Junior captain Chris Kreider.

Kreider, along with the likes of Bill Arnold, Brian Dumoulin, Kevin Hayes, John Gaudreau, Tommy Cross and Patrick Wey gives B.C. a roster that possesses the talent to stack up with any team they face, but if they hope to be successful in the NCAA Tournament and into the Frozen Four, they will need goaltender Parker Milner to become more reliable in the crease. 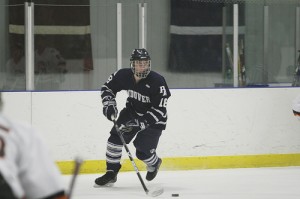 David O’Connor: Since almost everyone that follows NCAA hockey would likely say that Minnesota-Duluth is the favourite, I’m going to pick Boston College. They have a lot of players on their roster that could lead them to the championship this season.

Leading the charge for the Eagles is Chris Kreider, with 25 points in 23 games, and Bill Arnold, with 20 in 21 games played. Boston College has some great defenseman as well, as Tommy Cross and Brian Dumoulin are extremely valuable on the back end. All four of those players are NHL draft picks, and have a solid future ahead.

Plus, those fantastic jerseys they wore in their win over Northeastern at Fenway Park make it real easy to cheer for them.