The Tampa Bay Lightning have a tough start to the 2011-12 season.

Five games on the road in seven days, including matches against the Boston Bruins, last year’s Stanley Cup Champions, and the Washington Capitals, the reigning Southeast Division champs and an offensive powerhouse.

And while it’s ridiculously early to be drawing conclusions about the team – Detroit Red Wings General Manager Ken Holland once remarked that it wasn’t until the American Thanksgiving that an NHL team had shown its true colors – its unlikely that the Lightning’s coaching staff are satisfied with the point-per-game pace the team has set in its first three games.

In particular, you can bet that head coach Guy Boucher has noticed the Lightning’s current status as the worst team in the NHL when it comes to giving up shots on goal. Of the 30 teams in the league, the Bolts are dead last in the average shots-against category, sacrificing 39.3 per game – more than a shot per game worse than the next best team. 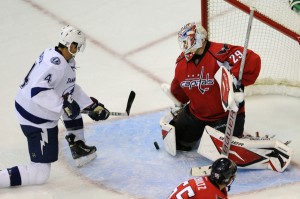 The Tampa Bay Lightning are doing a good job of getting pucks passed opposing goalies, but need to reduce the number of shots they allow. (Icon SMI)

So far this year, the Lighting have given up 33, 42, and 43 shots respectively in their first three contests. Of course, not all shots-against are created equal – there is a big difference between a 70-foot dump-in, and a back-door one timer a mere 10 feet from the net. But as no less an authority on scoring than Wayne Gretzky once said, “You miss one hundred percent of the shots you don’t take.”

Since the lockout, the NHL team that allowed the most shots-against averaged 23rd overall in goals-against, and 23rd in league placing – and none of these teams made the playoffs.

Games aren’t decided by shots-against of course, but the statistic does point toward the number of goals-against a team allows. Consider that the Bolts have allowed 10 goals on 113 shots so far in the 2011-12 campaign. Good enough defensive work to place them in a tie with the Columbus Blue Jackets for 24th in the league. So in relative terms, the Lightning are slightly better at keeping the puck out of the net than they are at reducing shots. But the fact remains that allowing more shots-against strongly predicts more goals-against.

Stellar goaltending can rescue a team from allowing too many goals-against, but this, too, has limits. Staff writer for the St. Petersburg Times, Damian Cristodero, argued that the score in the 4-1 loss to the Bruins favored the Bolts, considering they were out-shot 42-26. “If not for goaltender Mathieu Garon, the outcome would have been far worse. Add blocked shots and shots that missed the net, and Boston held an astonishing 85-46 edge.”

Of course, scoring goals can make up for defensive lapses.

The Lightning are much better at taking shots and scoring goals, so far, than they are at preventing them.

So the good news is that despite allowing many more shots per game, the Bolt’s goals-against average hasn’t yet followed suit. But this silver lining isn’t likely preventing the coaching staff from taking steps to decrease the Lightning’s shots-against. Consider that in the six previous seasons since the lockout, the team that allowed the most shots-against averaged 23rd in goals-against, and 23rd in league placing – and none of these teams made the playoffs.

It’s only been three games, but its time to clean up the shots-against before they do lasting damage to the Lightning’s ambitious goals for the season.