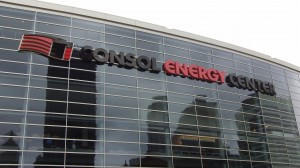 A visit to the Consol Energy Center in Pittsburgh can be costly for anyone who enters and exits the visitors locker room. Having to face a team that is Presidents’ Trophy material can do that to you; but having a superstar in Sidney Crosby riding a 24-game scoring streak prior to last night’s game, well, things just don’t get any easier.

The Atlanta Thrashers were well aware of the task at hand entering last night’s contest. However, recent history at the old Mellon Arena and the Penguins new home indicated that the Thrashers had other concerns to worry about — winning a hockey game in Pittsburgh and ending an eight-game losing streak there.

Just under a minute into the game, Evander Kane found the back of the net to give the Thrashers a 1-0 lead. Bryan Little and Alexander Burmistrov had the helpers on the goal. At times in the first frame, it seemed as though things were going Atlanta’s way; but it was Sidney Crosby’s 31st goal on the power play, extending his scoring streak to 25 games, that tied the game at 1-1.

Dustin Byfuglien buried a shot past Penguin goaltender Marc Andre Fleury on the power play with just under five minutes to go in the first period to regain the lead for the Thrashers. It was Sidney Crosby once again, though, who answered Atlanta’s call and tied the game at two apiece.

Several bright spots gave the Thrashers some momentum heading into the second period,  including outshooting Pittsburgh 15-11 in the first period. But forward Craig Adams scored short handed for Pittsburgh, taking away any positives from Atlanta. Penguin forward Matt Cooke battled for puck possession with Dustin Byfuglien and found Adams for a one-timer, giving the Penguins a 3-2 lead heading into the third period.

Atlanta’s blueline gave Pittsburgh too much breathing room out there and allowed players like Cooke to take full advantage of that.

It was all Pittsburgh in the final 20 minutes, scoring three even-strength goals to increase their lead to 6-2. Tough guy Eric Boulton found the back of the net for the fifth time this season, narrowing the Penguins lead to 6-3. It was not enough, though, as Atlanta dropped their ninth straight game in Pittsburgh and fourth straight overall.

Atlanta will host the Boston Bruins on Thursday night at the Philips Arena. From now until then, it’ll be back to the drawing board for head coach Craig Ramsey and his staff.

Patrice Cormier made his NHL debut last night in Pittsburgh after being recalled from the Chicago Wolves of the American Hockey League. Cormier played in 11 games in Chicago this season posting five points (two goals and three assists) with a plus-eight rating.

To make room for Cormier, the Thrashers re-assigned forward Tim Stapleton to the Chicago Wolves.