Well, it was a pretty good two days for the Toronto Maple Leafs. No, they didn’t trade Phil Kessel or Dion Phaneuf, but they did make a couple of moves to acquire more picks in the draft and even acquired a defenseman that could make the roster this year.

Let’s take a look at what the Maple Leafs did. 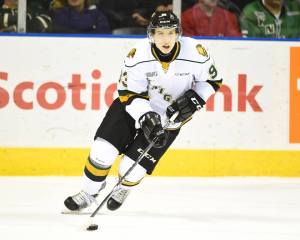 Mitch Marner is a magician with the puck and smart without it. (Photo: OHL Images)

It was no secret that the Leafs were interested in Marner. After all, it was Mark Hunter who drafted him with the London Knights. Hunter got the honor of announcing the pick once again. In an interview after his selection, Marner said that he wanted to play for Toronto his whole life. So hopefully he’ll be motivated when he makes the team. Could it be next season? Probably not.

The Leafs were slated to select 24th overall, the pick they acquired in the Cody Franson deal. However, they traded the pick to the Philadelphia Flyers in exchange for the 29th pick as well as the 61st pick, in the second round. They then traded the 29th pick to the Columbus Blue Jackets for the 34th pick (originally a Leafs pick) and the 68th pick.

After Connor McDavid and Dylan Strome went in the first three picks of the first round, the Leafs made Dermott the third player from the Erie Otters selected in the Draft. The best defenseman in Erie, Dermott gives the Leafs another puck-moving specialist in their pipeline.

If there was a player the Leafs selected in the draft that envisions the fact the Leafs valued skill over size, it was this pick. The first American taken by the Leafs in this draft, Bracco is pretty much of the Johnny Gaudreau mold. He will be attending Boston College starting in the fall.

One of the few selections the Leafs made that is over 6-feet tall, Nielsen made his debut with the Lethbridge Hurricanes of the WHL in 2013-14, playing one game. He played the entire season with the team this past year and will certainly have time to develop further in the coming years.

Dzierkals is a relative unknown, playing in a Russian junior league. He could be moving to the CHL for next season, according to James Mirtle.

Leafs pick Martins Dzierkals (the Latvian) is expected to come over and play in the CHL. Probably for team of Toronto’s choice.

Could that team be the London Knights?

Well, Lindgren is a former teammate of William Nylander, so there is the chemistry aspect to this pick. He is just the next in a line of Swedish defenseman the Leafs have taken in recent years. He supposedly is pretty good at maintaining possession for his team, waiting for plays to develop. 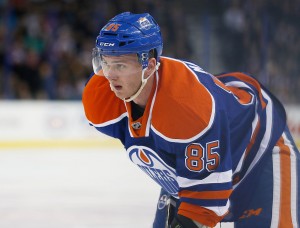 The Leafs were slated to select 107th in the fourth round. That was before they traded the pick and the rights to Brad Ross to the Edmonton Oilers in exchange for defenseman Martin Marincin. Ross recently signed in Germany, so it looks like Oilers were just freeing up a roster spot for Griffin Reinhart. Marincin is 23 and could very well make the Leafs roster next season if the Leafs make enough moves around their defense core.

Yet another small player with skill, Timashov scored more even-strength goals in the QMJHL than Timo Meier and Evgeny Svechnikov who were both drafted in the first round. He was also the Rookie of the Year in the QMJHL.

Nothing wrong with taking a player that won the Memorial Cup. Desrocher was actually in his second year of Draft eligibilty. That makes it two drafts in a row in which they have taken a 19-year old defenseman. Projected as a third-pairing physical defenseman, he was the tallest player the Leafs drafted in the past two days.

Did the Leafs get a steal here? Korostelev was ranked 60th by the International Scouting Services. He was ranked 46th by The Hockey News. The biggest knock on him, and the thing that probably caused him to fall, is his skating. Other than that, he knows how to put the puck in the net. He was a line mate of Pavel Zacha, the sixth overall pick of the New Jersey Devils, with Sarnia in the OHL.