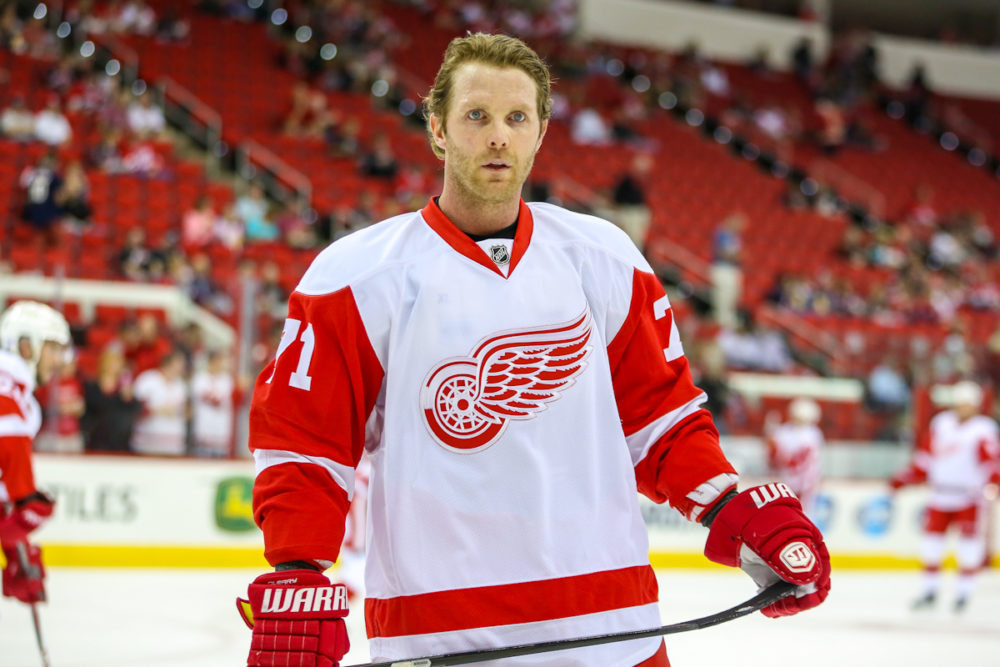 It’s entirely possible that Ken Holland is going to offer Daniel Cleary a contract – yes, again. A wise man once said, “You either die the hero, or you live long enough to see yourself become the villain”. OK, so maybe that was Christian Bale as Batman in “The Dark Knight”, but it still applies in this situation. Before I discuss Cleary, Ken Holland and the pitfalls of loyalty, I want to bring us back to a simpler time. What Red Wings fan could ever forget this goal? It was the goal that clinched a hard-fought series against the Anaheim Ducks in 2009, and it’s probably my fondest memory of Cleary.

It came at a time when he was contributing roughly 40 points per season, while displaying an in-your-face style that endeared him to the Joe Louis faithful. Cleary took abuse in front of the net, pushed through injuries, intense pain, and displayed the kind of leadership that made him one of Mike Babcock’s favorite players. Even as recently as the 2012-13 post-season, Cleary was contributing offensively. He finished second on the team behind Henrik Zetterberg in playoff scoring, notching 10 points through 14 games. For all that Cleary has done for the Red Wings and their fans, the reality is that the 36-year-old native of Newfoundland is not that player anymore – not by a longshot.

When Does Loyalty Go Too Far?

Now that we have those happy memories of Cleary fresh in our minds, let’s get back to reality. It’s 2015 and there is a very real possibility that Holland is going to bring Cleary back. Per Ansar Khan of the Detroit Free Press:

“The Detroit Red Wings still might sign forward Daniel Cleary, who is not ready to retire into a front office job.”

Sure, it’s speculation on the part of Khan, but he’s a reliable source. Besides, we’ve heard this before, haven’t we? Prior to the 2013-14 season, it was rumored that Cleary was offered a 3-year deal from the Philadelphia Flyers, reportedly worth 2.75M per year. Ultimately, he decided that he did not want to leave Detroit, and agreed to a one-year deal with the Wings worth 1.75M. With the Red Wings already in tight with the salary cap and on roster spots, there were rumblings of a handshake deal between Cleary and Holland. Essentially, Cleary signed the deal in Detroit “with the understanding the Wings would take into consideration what [he] left on the Flyers table”.

In 2013, Tomas Tatar and Gustav Nyquist were ready to take on larger roles, but the Cleary signing complicated the situation. Tatar served as a healthy scratch early in the year and Nyquist started the season in Grand Rapids. Cleary played in 52 games that season, scoring just eight points. In 2014, he signed a contract with a base salary of 1.5M and 1M in bonus money. While he did not have as big of an impact on roster decisions, Cleary played in 17 games, scoring just two points. With Cleary at the tail-end of his career, it’s difficult to find a reason to bring him back into the fold outside of Holland’s inexplicable loyalty.

Do You Want the Good News, or…?

What I took from the article is that if Cleary cannot crack the roster in Detroit (which, I doubt he can at this point), he’ll play in Grand Rapids. As Khan points out, “If Cleary is signed and assigned to the AHL, a maximum of $950,000 of his salary wouldn’t count against the cap.” Depending on the source, the Red Wings are exceeding the salary cap by 964K-1.539M, but they can bury his deal.

It’s doubtful that Cleary is going to have much of an impact on Detroit’s roster decisions, either. Chances are he won’t be pushing someone like Tomas Jurco or Teemu Pulkkinen out of the lineup (both must pass through waivers now). So what about in Grand Rapids? It’s possible that Cleary pushes someone like Martin Frk or Zack Nastasiuk out of the lineup, but those are players who have to show they can earn a full-time spot with the Griffins. It’s more likely that he would replace someone like Tristan Grant on Grand Rapids’ fourth line. While I feel as if signing Cleary at this point in his career would be a frivolous move, the chances of him impeding the progress of a younger player is low.