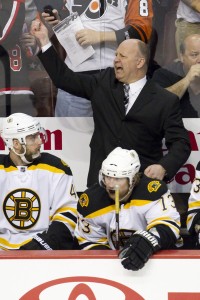 Calude Julien needs to get the Bruins' power play in order if they wish to eliminate the Lightning. (Icon SMI)

Monday evening, we went over the fact that Alex Ovechkin will miss the Capitals’ next three games due to a suspension. So now, without Ovechkin, Nicklas Backstrom (concussion) and Mike Green (groin), the Caps are clearly without their best players during a stretch where they will need to rack up as many points as they can to stay in the playoff race. As a result, we’ll have to focus on the team as is and the players who ARE in the lineup.

So how did this Capitals team fare against the big, bad Bruins Tuesday night? It started out looking like the Caps were “hanging in there,” after the Bruins scored first and then went tit-for-tat on the scoreboard. However, the starless Caps stuck to the gameplan and matched Boston’s play to push out a 5-3 win over the visitors.

Going into the match, the main concern would be how they could hold up against Boston’s extremely physical style. Washington hasn’t done very well against naturally physical teams, such as the Flyers and many Western Conference teams. Without their captain and physical catalyst, Ovechkin, audiences were curious to see how the Caps would react to having to play without that. The Capitals did a solid job of limiting puck battles along the boards, which would, in turn, limit the amount of physical dominance the Bruins were allowed to have. Furthermore, Washington outhit Boston, 30-16. The Caps appeared to get a bit fatigued toward the end of the game, being stuck on 22 shots between goals No. 4 and 5, but they did their job well enough to that point to hold the Bruins scoreless and go on for the victory.

The physical play as a team was key to winning, but because all the big guns were out, the next concern was over who would stand out in their absence. Tuesday’s first star of the game on all accounts was Mathieu Perreault. Often criticized for being inconsistent and being unable to last through physical play, the 24-year-old Quebec native scored his first career NHL hat trick against one of the tougher teams in the league. Knowing he has more to prove, Perreault stated if he gets off to better starts in games and earns more minutes it will be easier to play at his best. Perreault played most of the game alongside Alex Semin (who has scored 17 points in his last 17 games) and Marcus Johansson, who registered a point each assisting on Perreault goals. As two other players who have had trouble being reliable this season, if Perreault keeps up on his claim, it might be a cure to the scoring woes that has haunted the Caps all year long and provide support for the top line when those players return. 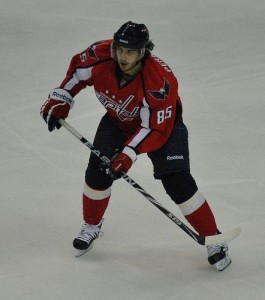 Matt Hendricks cited the fact that the stars being out of the lineup meant less skill, so the team had to be forced to commit to the chip-and-chase style. In observing the result, the skill came as a byproduct of sticking to the plan.

Of course, one of the patterns that has been constant in this very inconsistent season for Washington has been their propensity to show up for games that “matter,” or where there is extra pressure. One of those games being the win over the Rangers that spurned a four-game winning streak, the 3-0 win over Montreal could count as well. Even their last game in Pittsburgh where they lost 4-3 in overtime, the Caps played better. This is versus a game like the 3-0 loss in Carolina and the 3-0 dud at home to the Islanders. They didn’t *have* to win those games, per se, because no one would knock them if they lost. Boston, being a benchmark game in the season, the Caps won and played tough hockey.

The team will have the rest of the week off for the All-Star break until Monday for practice in preparation for their next game Tuesday against the Tampa Bay Lightning.

The Caps appeared to get a bit fatigued toward the end of the game, being stuck on 22 shots between goals No. 4 and 5