When the Minnesota Wild acquired goalie Ilya Bryzgalov prior to the NHL’s trade deadline the team needed a veteran goalie that could backup Darcy Kemper into the Stanley Cup Playoffs. The team needed a backup since their number one goalie, Josh Hardin has been on the Injured Reserve due to complications with MS. Wild GM Chuck Fletcher wanted a goalie that would play well and would want to be successful heading into free agency after the NHL season. 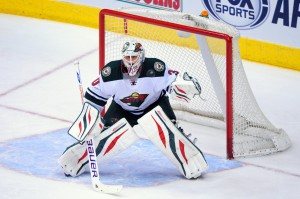 Ilya Bryzgalov has made a steady transition from Edmonton to Minnesota and has amassed a very formidable 4-0-2 record for the Wild while the team’s netminding situation has been anything steady. (Matt Kartozian-USA TODAY Sports)

Bryzgalov has earned the starting job with his good play. In his nine games in a Wild uniform, Bryzgalov has won 5 games and earned a point in all his 4 losses (OT or SO losses). Bryzgalov and the Wild now look to the Stanley Cup playoffs and hope that Ilya can take them deep into the playoffs.

Will Ilya be able to backstop the Wild to success in the post-season? It’s hard to say but I will examine that question in this article.

Playoff Experience
In his career, Bryzgalov has 29 games playoff experience. His teams have made it to the playoffs 4 times. I think that the Wild are fortunate to have an experienced playoff netminder this time around.

Last year the Wild were one series and done in the playoffs. To be successful this year they will need a netminder who is strong between the pipes. They will need a goalie that can single-handedly win them games. I believe that playoff experience is necessary for a goalie to be successful and Bryzgalov does bring that ingredient to the table. But what about playoff success?

Playoff Success?
That is lacking in Ilya Brygalov’s game. He has only won 11 of his 27 Stanley Cup playoff games. Simply put, that isn’t good at all. His lack of success does concern me but I’m hopeful that there is more that will come into play than just how he’s performed in the past.

So what do I think will come into play that could lead Bryzgalov and the Wild on a successful run through the playoffs? Ilya will be a free agent after this season and he will have to finish this season on a positive note. If he does poorly in the playoffs, his value will nose dive. Obviously the opposite will be true if he’s successful.

So I think Ilya is going to be focused on winning games. He’s definitely been playing well as of late and will help the Wild make the playoffs.

Streaking at the Right Time
Ilya Bryzgalov and the Wild have been streaking at the right time, earning points even in losses. This has helped the team to maintain its 7th place seeding. If the Wild finish strong they will earn the 7th seed. I think that the whole team has played well but I do believe that Bryzgalov’s strong netminding has come at a time when the Wild have needed it most. He provided a spark that helped the team gain confidence. They were free to do their job and not worry what was happening in the nets. As a result the whole team has played well in the past 10 games.

Minnesota Will face Stiff Competition
The most impressive thing for me is that Ilya Bryzgalov has been playing well against top competition. The team has played St. Louis, Phoenix, Chicago, LA and most recently Pittsburgh (Saturday night) and he’s earned two shutouts during that time. Bryzgalov earned one of those shutouts against the Pittsburgh Penguins.

If that wasn’t a big enough victory to provide wild fans with some confidence going into the playoffs, I’m not sure what will. Maybe the last 4 games will provide that confidence. The Wild play two divisional leaders (St. Louis Blues and Boston Bruins) in in the next four days. Those games might be the difference between being the 7th or 8th seed. If the Wild win both those games I will have a lot of confidence in the team’s chances of doing well in the playoffs.

Bryzgalov is playing well right now and hopefully he can keep up the good work. The Wild will need a hot goalie entering the playoffs in order to avoid the same fate as last year when they lost to the Chicago Blackhawks in 5 games. I’m hopeful that Ilya Bryzgalov will be the rock that the team needs in net.