Who said that teams vying for a spot in the western conference playoffs wouldn’t partner up to make a trade?  Well ladies and gentlemen, it just happened.  The Chicago Blackhawks and Calgary Flames have gone against the grain and have each taken a step forward by making an early trade to improve their clubs. 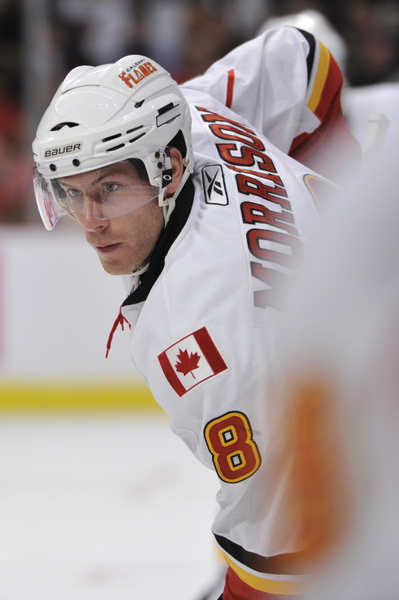 The Hawks acquire Brendan Morrison,  a 36 year old, veteran forward who can play Center and Wing.  He can also play in almost any situation.  He’s a two way forward, he can win faceoffs and he’s a guy who can kill penalties and has an offensive flare when he wants.  He is aging, so you’re not getting the forward that once centered Todd Bertuzzi and Markus Naslund and finished with 71 points but he can be potent and in the right situation, BMO is your guy.  Morrisson is also an impending UFA who comes at a fairly cheap cap hit of 1.25 million this season.

Going the other way is Brian Connelly who the Hawks will miss in the system.  The 25 year old blue liner went undrafted into the NHL, but after impressing at Colorado College, signed with the Hawks as a free agent.  The 5”11 defenseman is in his 3rd full season with the Rockford Ice Hogs and has tallied 126 points in 211 games in the AHL.

The move for Calgary is said to be a pre-cursor to a move to acquire another big name. Rumor is that the Flames have their eyes set on Jeff Carter.

Meanwhile, the Hawks, who have added an experienced piece to their playoff puzzle, are also said to be interested in adding a top 4 defenseman to the mix.  The next month should be interesting.  Stan Bowman’s move didn’t break the bank and gives the Hawks to go after another player they have been rumored to be chasing.  It also gives Bowman some flexibility to perhaps move an existing forward who may be of interest to another team.

Footnote: There is a bit of history here, as Brendan Morrison was crunched by Niklas Hjalmarsson about just over 11 months ago and limped all the way to the Flames bench while being mocked by the entire Blackhawks bench.  He’s one of you now boys!  I personally don’t think it will take long for the Hawks to appreciate just what kind of player Brendan Morrison is.   Have a look at the hit here: