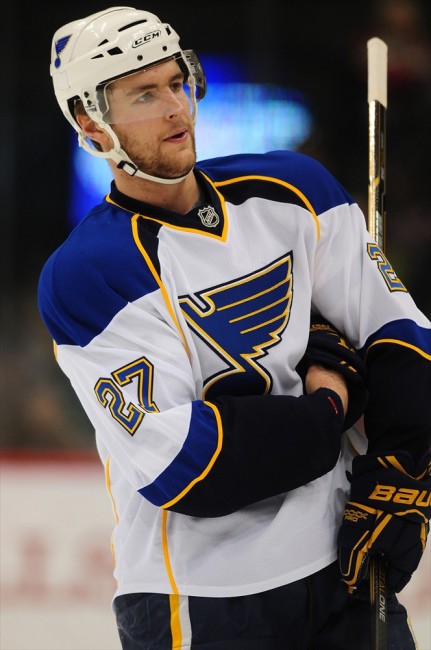 Alex Pietrangelo and Kevin Shattenkirk took very different routes to the NHL, but one would argue that their impact is the major reason the St. Louis Blues are hovering near the top of the NHL standings.

The two young defensmen lead the Blues in ice time with Pietrangelo, 22, (24:12 total ice time/game) and Shattenkirk, 23, (21:34 total ice time/game) and contribute in all three phases of the game. They are weapons on the power play and have a veteran poise beyond their years on the penalty kill. The both have great hockey sense, and despite being two of the youngest players on St. Louis’ roster, are not showing signs of wearing down.

Now the two are considered the future on the blue line in St. Louis for the next ten years and are drawing comparisons to some of the best defensemen in the NHL.

Pietrangelo has the makeup, vision and positioning of a young Niklas Lidstrom. The sky is the limit. The Blues took his development slowly by sending him back to the Ontario Hockey League as an 18 and 19-year-old while fellow draft class defensemen Drew Doughty (2nd overall), Zach Bogosian (3rd overall) and Luke Schenn (5th overall) jumped right to the NHL. The move appears to have paid off and some would argue Pietrangelo has the highest ceiling of them all.

Shattenkirk has often been compared to former all-star and fellow under-sized defensemen Brian Rafalski, who retired last summer. His ability to see the ice and make the smart, quick play is uncanny. There is a saying that you can’t teach hockey sense. Shattenkirk has that “it” factor.

How they got here

Pietrangelo was born in King City, Ontario and starred for the Niagara Ice Dogs of the Ontario Hockey League before being selected fourth overall by St. Louis in the 2008 NHL entry draft. Shattenkirk was born in Greenwich, Conn. and was playing for the U.S. Development Program before being selected 14th overall in 2007 by the Colorado Avalanche. He later starred at Boston University where he helped BU win a National Title at the 2009 Frozen Four.

The trade that brought Shattenkirk to St. Louis was a blockbuster. It was a late night strike by Blues General Manager Doug Armstrong as the trade was consummated after midnight on a night that the Blues played in Buffalo. Armstrong shocked the hockey world sending former first overall pick Erik Johnson, Jay McClement and a future first round draft pick (selected Duncan Siemens, 11th overall) to Colorado for Shattenkirk, Chris Stewart and a second round draft choice (selected Ty Rattie, 32nd overall).

The Blues have also allowed the second fewest goals in the NHL with 94 while surrendering a league-best 26 shots per game. It is a team effort but the two young blue liners, while logging big ice time, make their presence known on a nightly basis.

The two also appear durable as Shattenkirk has not missed a game since his first call up by Colorado last season and Pietrangelo has only missed three games since becoming a regular last year.

The Blues could not be happier with the play of their two rising stars on defense. With time the rest of  league will find out just how special these two are, if they haven’t already.