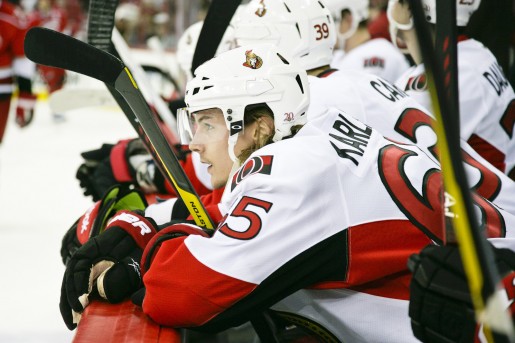 Coming into this season, expectations for the Ottawa Senators were incredibly low. There wasn’t a whole lot of talk concerning playoffs, and the dominant conversation was how bad will they be, and should they tank for the first overall pick in the 2012 draft.

The diminished expectations in Canada’s capital weren’t unfair considering the yard sale that General Manager Bryan Murray conducted in 2011. Gone was Mike Fisher, Chris Kelly, and Jarkko Ruutu and the Sens were left with an awkward mix of youth and aging veterans. Players like Sergei Gonchar and Daniel Alfredsson were considered to be on their last legs, while many thought that young players like Nick Foligno and Erik Karlsson weren’t ready to carry the team.

So why have the Senators been so good? There are a few things that stand out.

For starters, put your hand up if you thought Milan Michalek would be among the goal scoring leaders in the NHL. That’s what I thought. Michalek has 23 goals in 41 games, and given the fact that he had just 18 goals in 66 games last season, his play has been pretty shocking.

The Czech’s career high in goals was 26 way back in 2006-2007 when he was still with the Sharks, and he is currently on pace for 46 goals. Much of the credit for Michalek’s improved play should be attributed to his centre, Jason Spezza. The much-maligned 7-million a year Spezza hasn’t been a point per game player since 2007-2008. It is no surprise that during Spezza’s best years from 2006-2008, the Senators were pretty good. Spezza has battled injury in recent years and now that he’s healthy, he’s showing the skill the point producing ability that people expect from him.

One of the most pleasant surprises for Ottawa fans has been the emergence of the teams young players. Last season, Nick Foligno was insulated with veteran centremen like Chris Kelly and Mike Fisher, yet he still struggled mightily. He finished the season a minus 19, and he had just 34 points in 82 games. Despite his struggles, Foligno was asked to play a bigger role this season and he has responded. He has 28 points in 46 games and he is currently just a minus one.

The most obvious success story this season is defenceman Erick Karlsson. The diminuitive Swede had a terrific sophomore campaign last season in terms of his offense, he scored 45 points. However he was also a minus 30 in 75 games. There were lingering doubts as to whether Karlsson could take care of his own end before transitioning into the attack. He has answered those questions emphatically. Karlsson is currently a plus 6 on the season, and he is scoring at a point a game pace, by far the best offensive output of any defenseman in the NHL.

When talking about the young talent on the Senators roster, Jared Cowen also deserves to be mentioned. The 9th overall pick from the 2009 draft is having an admirable rookie campaign averaging over 20 minutes of ice time per game, and he’s also chipped in offensively with 12 points. Typically defensemen breaking into the NHL struggle in their own zone trying to handle players that are bigger, faster, and more skilled, however Cowen is also a plus three on the season.

For the past few months I have expected Ottawa to stumble and fall out of the playoff picture, but the reality is that they are gaining steam. The Senators have won eight of their past nine games, and they have also won twelve of their past sixteen. Considering the struggles of teams that made the playoffs in 2011 like Buffalo, Montreal, and Tampa Bay, the Senators are in a great position to maintain their position and make the playoffs.

Maple Leafs Depth Must Step Up Against Blue Jackets

Maple Leafs Divide the House to Conquer the Competition