NASHVILLE — Nick Schmaltz had a goal and an assist, Adin Hill made 29 saves for his first NHL shutout and the Arizona Coyotes beat the Nashville Predators 3-0 on Thursday night. 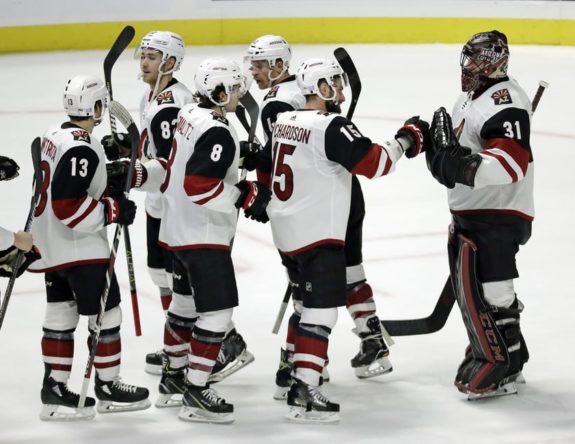 Clayton Keller and Brad Richardson scored the other goals in Arizona’s second straight victory. Schmaltz’s two points were his first since being acquired Sunday in a trade with the Chicago Blackhawks.

Nashville has lost three of four.

Keller scored first at 1:40 of the second period. Schmaltz carried the puck into the Nashville zone and skated around the left faceoff circle. Near the boards, he found Keller in the slot, where he beat Predators goalie Pekka Rinne with a wrist shot low to the stick side.

Schmaltz made it 2-0 with 20.9 seconds remaining in the second.

With the Coyotes on a power play, he beat Rinne with a wrist shot from just above the right faceoff dot off an assist from captain Oliver Ekman-Larsson.

NOTES: Ekman-Larsson played his 600th career game. … Arizona is 6-3-1 in its last 10 against Nashville. … The Predators are 11-4-1 when outshooting their opponent. … Nashville was shut out for the second time this season.