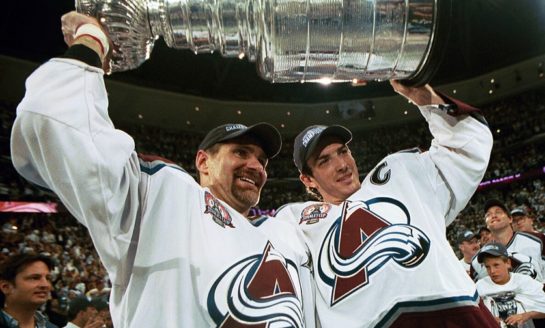 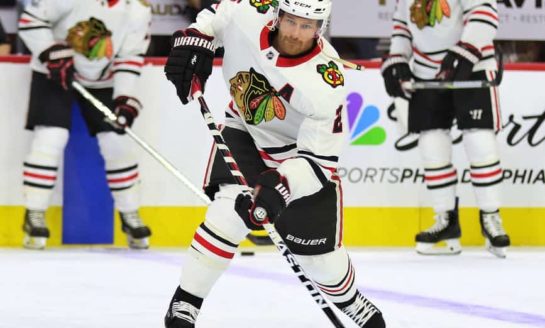 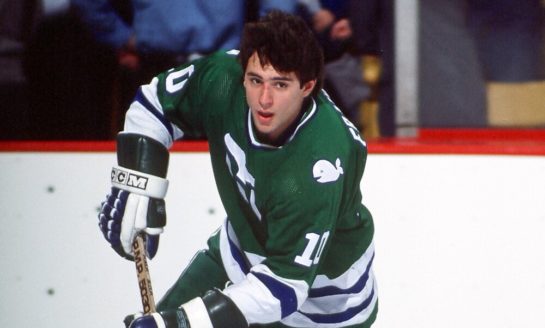 October 24th, 2020 Perhaps the greatest defenseman in National Hockey League history hit a pair of milestones, with two different teams, on this date. Plus, the Nassau Coliseum hosted a handful of memorable moments and a current general manager built his Hall of Fame credentials during his playing career. Orr... 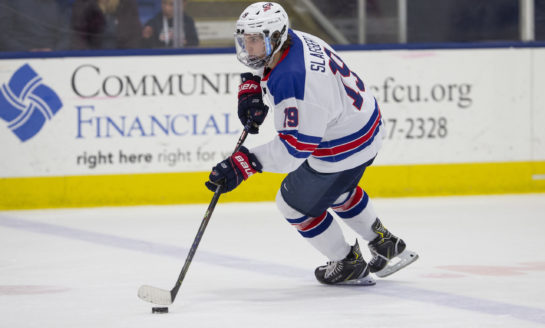 October 23rd, 2020 Landon Slaggert, a 2020 third-round draft pick of the Chicago Blackhawks (#79 overall), is currently a freshman at the University of Notre Dame and a member of the Fighting Irish hockey team. We recently talked by telephone about his experience at the recently concluded Team USA 2021 US...

By the Numbers: Who Should Stay and Go in Blackhawks' Rebuild 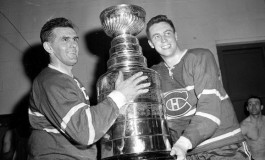 If you like legendary names, then Oct. 19 is the date for you. Some of the greatest players to ever strap on a pair of skates in a National Hockey League game had big moments on this date. There were league debuts, first goals, first assists and first wins among today’s memories. The Rocket Blasts No. 500 Maurice Richard made NHL history, on Oct. 19, 1957, in the Montreal Canadiens’ 3-1 victory over the Chicago Blackhawks, at the Forum. A couple of legendary players were part of Richard’s groundbreaking play. While on a first-period power-play, Jean Beliveau fed the puck to Richard, who fired a wrist shot past goaltender Glenn Hall for the 500th goal of his career. Richard was the first player in league history to score 500 goals. In fact, at this time, no other player had even scored 400 goals. When Richard retired in 1960, he had 544 goals, the most of all-time. He has since fallen down to 31st on the all-time goals...
October 18th, 2020 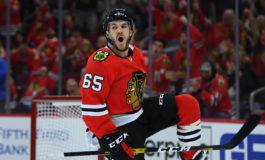 Blackhawks Have Decisions to Make With Smith, Shaw & Strome

The Chicago Blackhawks have some decisions still to make before the offseason is over and we hit the 2020-21 season. With $5,213,687 left for the team to spend, they have enough money to bring Dylan Strome back. But there's still moves to be made. Is Andrew Shaw Still Worth His Contract? The days of Andrew Shaw in the NHL could be numbered, as he has suffered multiple concussions, which have kept him out of action. In 2019-20, Shaw suffered a concussion 26 games in, which ended his entire season. Andrew Shaw of the Chicago Blackhawks celebrates a goal. (Photo by Stacy Revere/Getty Images) Even when the playoffs hit, Shaw didn’t play. He said he’ll be ready for the 2020-21 NHL season, but there’s a lot of risks there. He is being paid $3.9 million per season for the next two seasons. The team could try to trade him now, or wait until the buyout window next season to buy him out. If the Blackhawks can’t find a trade partner at some point either before the season...
October 18th, 2020 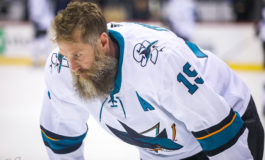 In today's NHL rumor rundown, how close are the Chicago Blackhawks to a deal with restricted free agent Dylan Strome? In Philadelphia, the Flyers are looking to do more in this offseason, but are being conservative knowing what deal needs to get done in the future. Who did Joe Thornton talk to when he was trying to decide to leave San Jose? Finally, in Montreal, GM Marc Bergevin is well aware of the importance of Phillip Danault to the team, but knows that it could be tricky to fit him in long-term. Blackhawks and Strome Not Close According to Scott Powers of The Athletic, when it comes to the Chicago Blackhawks and Dylan Strome finalizing a deal that would extend the restricted free agent on a new contract, it "doesn’t sound like anyone is in a hurry to get it done yet." Dylan Strome, Chicago Blackhawks (Jess Starr/The Hockey Writers) Powers writes: With Strome not having arbitration rights, there isn’t a rush for either party to get the deal done. The...
October 18th, 2020 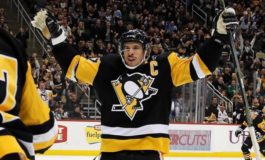 Oct. 18 has seen some memorable victories in National Hockey League history, including the first for two expansion teams. There were also plenty of personal milestones reached including first goals, first shutouts and even a very important first professional contract. A Foursome of Historic Wins The third time was the charm for the Philadelphia Flyers. After losing the first two games of their inaugural season of 1967-68, on Oct. 18, 1967, they hit the win column for the first time with a 2-1 victory at the fellow expansion St. Louis Blues. Ed Hoekstra’s third-period tally proved to be the first game-winning goal in franchise history. Goaltender Doug Favell made 34 saves to earn the win.

On this date in 1967, the #Flyers earned their first NHL victory by beating the #STLBlues 2-1. pic.twitter.com/q0tCCFYqyz

On Oct. 18, 1986, the Montreal Canadiens earned their 5,000th all-time point when they beat the Winnipeg Jets 5-3, at the Forum. Stephane Richer led the way with two goals and an assist while Claude Lemiuex added to...
October 17th, 2020 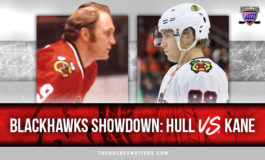 As the COVID-19 crisis has paused the NHL season, it’s the perfect time to reflect on the history of Chicago Blackhawks. Today we decide once and for all who the greatest forward in Blackhawks history is - Bobby Hull or Patrick Kane. Related: Flyers Showdown - Eric Lindros vs. Bobby Clarke It’s important to note that Hull left the NHL for a few seasons to play in the WHL, but those stats won’t be included in this article because we are focusing on his history in the NHL, particularly with the Blackhawks. Hull's Case Known as one of the best players to ever wear a Blackhawks sweater and to play in the NHL, Hull tallied a total of 610 goals and 560 assists over 1,063 games across 16 seasons. 15 of the seasons were with the Blackhawks, where he tallied a total of 604 goals and 549 assists in 1,036 games. Some of his greatest achievements include one Stanley Cup, three Art Ross Trophies, two Hart Trophies, and one Lady Byng Trophy. Bobby Hull (THW...
October 16th, 2020 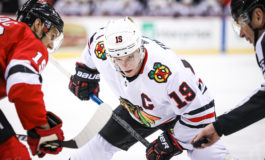 Today in Chicago Blackhawks’ news and rumors, we look a little deeper into the core players' displeasure regarding the direction of the team. We also explore some hot takes about newly signed defenseman Nikita Zadorov and center Lucas Wallmark. There might be a lot of doom and gloom in Chicago right now, but we attempt to focus on some positives as we look towards the coming season. Toews’ Point We all know by now that Blackhawks’ captain Jonathan Toews isn’t exactly happy about the direction the team is taking, with letting Corey Crawford walk and Brandon Saad being traded. Sportsnet’s Elliotte Friedman brought this up in his most recent “31 Thoughts” column. Said Friedman, I’ve chased Jonathan Toews during the off-season. He prefers his privacy and declines interviews, which is totally understandable. I only bring it up because the fact he surfaced to give an interview to The Athletic’s Mark Lazerus about the Blackhawks’ direction is significant. Toews...
October 16th, 2020 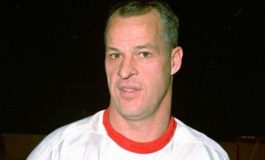 The National Hockey League changed forever on this date when one of its most legendary players took to the ice for the first time. Speaking of first, there were plenty of memorable events to happen for the first time as well as some goaltending greats doing what they did best. Mr. Hockey Makes His Debut The NHL welcomed in one of its most legendary players on this date in 1946. This is when an 18-year-old Gordie Howe made his debut with the Detroit Red Wings. Wearing No. 17, as he didn’t switch to his famous No. 9 until the following season, Howe scored the first of his 801 career goals in a 3-3 tie with the Toronto Maple Leafs. This started a 32-season professional career that lasted until 1980. He spent 25 seasons with the Red Wings before retiring in 1971. He came out of retirement in 1973 to join the Houston Aeros in the World Hockey Association (WHA). He had one final season in the NHL after the Hartford Whalers joined...
October 15th, 2020 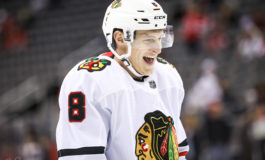 Dominik Kubalik began his offseason by signing a well-deserved two-year extension to remain with the Chicago Blackhawks. With the 2020 NHL Entry Draft now complete, the assessment of those chosen has already begun and there is no better time to highlight Kubalik's impressive rookie campaign. As a seventh-round selection, he helps prove that late picks can be just as impactful as any year's more sought-after prospects.

Forward Dominik Kubalik has inked a 2-year contract extension that runs through the 2021-22 season! #Blackhawks pic.twitter.com/z31ES8m8d8

During the draft, most of the spotlight shines on the earlier selections and throughout the first few rounds. Rightfully so, as these are the high-profile players expected to break into their lineup and become instant different makers. Chicago's roster currently includes six forwards who are all former first-rounders. When compared to those with higher anticipation of success, Kubalik's numbers really begin to shine. Producing Professionally Entering the NHL in 2019-20 as a 24-year-old,...
Masthead