The New York Rangers haven’t exactly been where they want to be lately. They’ve succumbed into a win-lose pattern and haven’t been able to shake it yet. The last two games, a win against the Flyers on Jan. 16 and a loss to the Capitals on Jan.17, showed fans a few things about the Rangers play.

The team made some mistakes against the Capitals on Sunday, ultimately letting themselves fall to the team, who currently lead the NHL. Despite a few mistakes the team was able to play a good fast paced game on the ice, but unfortunately it wasn’t enough for them to leave the weekend with two wins.

One of the more noticeable takeaways from the weekend, and a positive one, was the reemergence of the Chris Kreider everyone has been looking for.

Kreider was a force over the weekend. He bounced back into his old self: he was skating fast, taking shots, making hits, and was an overall strong offensive player.

In the second period of the Rangers’ game against the Flyers on Saturday Kreider scored and grabbed the team the lead. Kreider scored in front of the net after a pass from linemate Rick Nash, who had just taken the puck from Derek Stepan by the blue line.

Some sweet backhand sauce from Rick Nash to set up Chris Kreider. #NYRvsPHIhttps://t.co/BlIYUlEznE

This goal was an important one for Kreider, not only did it get the Rangers an edge in the game but it also gave Kreider a surge of play, breaking any kind of mental setback he might have developed. It was apparent that the goal had unleashed a new energy throughout the forward, especially when he scored two more goals against Washington on Sunday.

Kreider came alive in Sunday’s game against Washington. Kreider scored two goals in the match-up, one in the 1st period, a deflection from captain Ryan McDonagh, and the second in the 2nd period in a play with the same line mates from his goal against the Flyers, Nash and Stepan.

Unfortunately Kreider’s two goals weren’t enough to sustain a win, but the game was progress for him. He played the fast-paced game everyone is used to him playing, and grabbed some goals right in front of net, his lucky place when it comes to scoring.

Aside from grabbing some goals, Kreider was all over the ice trying to make plays, making hits, and being the forward that the team, and the fans, was missing. This new surge of play is exactly what Kreider needed to bring his play back to life. 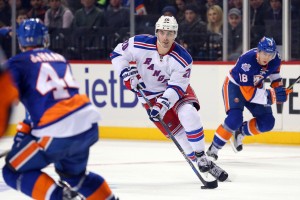 From here on out Kreider should continue to have such lively games. His recent play hasn’t portrayed him in the best light, but he’s showing now that he hasn’t lost touch with the Kreider everyone is used to. Kreider’s play should continue to be on the rise, he’s shown hes completely capable and his confidence is returning to get him on the right track.

The return of Chris Kreider’s usual and expected play is important. The Rangers have been looking for goals, not only to keep their scoring high but to help them win some games. Kreider getting back into his goal-scoring mode is coming just in time, the Rangers need wins now more than ever.

Last season Kreider scored 13 of his 21 goals after mid-January, the same time he has reemerged this season. This shows that he is no stranger to making a come back, nor is he a stranger to grabbing goals when it counts.

Hopefully Kreider can grab a goal in the Rangers’ game against the Vancouver Canucks on Tuesday, though it seems like his strong play will continue.

The Rangers take the ice in Madison Square Garden at 7 p.m. on Tuesday against the Canucks.