It was a microcosm of the entire season: Jaden Schwartz of the St. Louis Blues sprinted away from his defensive zone towards a loose puck in front of an empty net. He got there first and attempted to chip the puck over Ottawa Senators defenseman Christian Wolanin, whose last resort was to dive to make the play. The puck, however, had other ideas and caromed off Wolanin’s stick behind the net. As the clock ticked down to zero, Schwartz lifted his eyes to the sky, wondering when his run of bad luck would end.

It was the perfect moment to capture the pain and disappointment that has been Schwartz’s season. In 35 games, he has just three goals despite collecting 17 assists. He’s struggled with injury, as has been typical throughout his career. The player often described as the “straw that stirs the drink” in St. Louis isn’t stirring anything, and the team’s results show it.

Now that the All-Star Break is almost upon us, and Schwartz continues to struggle, is it time to panic?

Prior to the 2018-19 season, Schwartz was one of the more quietly valuable players in the league. In fact, his peers recognized him as the second-most underrated NHL player, behind Nicklas Bäckström of the Washington Capitals. 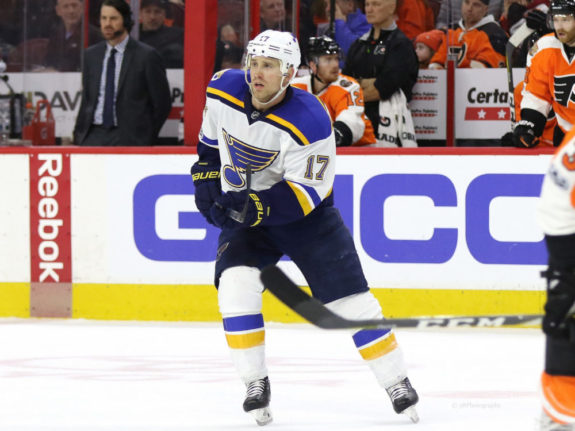 The honor of his peers’ recognition was well earned. The vote was cast as Schwartz was in the middle of his fourth-career 55-plus point season, a mark he’s achieved every time he’s played more than 45 games. It was also a career high in points-per-game, as Schwartz finished 2017-18 with 59 points, despite only playing in 63 games.

Such has been the story of his career: periods of brilliant play mingled with significant injuries. Despite debuting at the end of the 2011-12 season, he has never played in all 82 games. He’s also had two major injuries in his career, both to his ankle. He missed 49 games in 2015-16 with a fractured ankle, and it was another ankle injury in 2017-18 that put him on the shelf for six weeks and arguably tolled the death knell for the Blues’ season.

But when he’s been healthy, Schwartz has been a phenomenal player for St. Louis, every bit as valuable as Vladimir Tarasenko or Alex Pietrangelo. That is, until this season, when both the Blues and Schwartz have experienced unexpected regressions.

A Season to Forget for Schwartz

The 2018-19 season simply has not been kind to Schwartz. His current .57 points-per-game rate would be his lowest since his sophomore season. He is currently a minus one, despite not having a negative plus/minus since that same second season in the league. His shooting percentage, an abysmal 3.3 percent, is all but inexplicable, and over nine points below his career number of 12.6 percent. In fact, he’s one of the unluckiest players in the league in that department.

196 Forwards have 75 or more shots on Goal this season.

The other is Colton Sceviour with 3 Goals on 86 shots.#stlblues

There are other negative indicators as well. Only two of his 20 points this season have come on the power play, which isn’t helping a unit ranked 17th in the league. And his time on ice is down almost a minute and a half from his career average, which indicates that he’s losing the trust of his coach. Most concerning, he has a point share of just 1.4. Point shares are a statistic designed to measure a player’s value to his team in the standings, and a 1.4 mark isn’t very good. It’s down dramatically from the last two seasons, in which he had marks of 7.2 and 6.4, respectively.

These struggles are visibly weighing on Schwartz, who is passing up good shooting opportunities and struggling to bury even the easiest of chances, as with the empty net against the Senators. Is all hope lost for him this season? It would be easy to think so, but there are actually many reasons to hold out hope for a turnaround.

Even as bad as things look for Schwartz this season, there are reasons to remain optimistic that he can turn things around. First, his possession metrics are no worse than they have been in the past, and in some ways they are better. His individual Corsi For percentage (CF%) is at 54.7 percent, which is actually up slightly from his career mark, even if it is down significantly from his impressive 57.1 percent mark last season.

Additionally, his team is playing better with him on the ice than without. His relative Corsi For percentage, a number which compares his CF% to that of his teammates, is five percent, meaning the Blues possess the puck five percent more with Schwartz on the ice than when he isn’t skating. He is also getting more takeaways and drawing more penalties on average than he has in past seasons.

What’s most impressive about Schwartz’s game is his chance creation. According to Natural Stat Trick, he is generating more high-danger chances per game than he ever has, and he’s helping his team dominate in that category. As a unit, the Blues are creating over 60 percent of high-danger chances when Schwartz is on the ice.

Somehow, Jaden Schwartz has only 3 goals on 9 xG, with an excellent rate of per game xG generation. It's really wacky.https://t.co/7VJtPDuHIb pic.twitter.com/oukuhkvnDr

To further show this, take a look at Schwartz’s expected goal (xG) numbers. He has almost nine expected goals on the season, but only three actual goals to show for it. To compare, Vancouver Canucks rookie sensation Elias Pettersson has 22 goals this season versus 9.477 xG. And Schwartz’s teammate Tarasenko has 15 goals on roughly 15 xG on the season.

Jaden Just Getting the Luck of the Draw

All of this points to one common problem: luck. The reality is that, while Schwartz may or may not be playing as well as he has in other seasons, the single biggest factor in his paltry numbers this season is luck. That would explain his anemic shooting percentage, along with his inability to convert on both expected goals and high-danger chances.

It may not be a very popular explanation, and it won’t necessarily help Schwartz turn his season around, but every hockey player eventually finds himself spurned by Lady Luck at one point or another. The good news is there’s no need to panic about Schwartz. His play will return to normal, and the goals will come, as long as he keeps doing what he’s been doing: controlling the play, creating great chances and trusting that his luck will eventually turn.