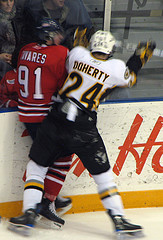 One-Timer: The towering 6’7’ defenseman is an imposing figure on the blueline. Doherty failed to improve on last seasons offensive totals, registering 20 points in 68 games with Kingston. He was -14 and totaled 140 penalty minutes. Taylor was impressive at the combine as noted below. He has good skating ability for a big man and is gradually learning how best to use his massive frame to be a force in the back end. He displays a strong work ethic, but will continue to need to work on his mobility and lateral movement. He will not likely be much of an offensive contributor at the next level, but if continues to develop will be a tough shutdown d-man that opponents will hate to play against.

International Tournament(s): Doherty failed to register a point in the WJC-U18s, but was a plus 4.