For years, Alex Edler has been a polarizing figure in the Vancouver sports market.

With injuries and age accumulating, we’ve likely passed the days of prime Edler. That doesn’t mean, though, that the debate on the now 31-year-old Swede has ended. In fact, if anything, the division has only increased.

Critics of Edler say that his game as a whole has slowed down. They say that his sluggish and poor decision making with the puck creates frequent turnovers. Physically, they argue that his speed and mobility have deteriorated to the point where he’s a major liability to counterattacks. Offensively, they’re frustrated with his lack of vision and decisiveness.

On the other hand, we have the Edler supporters. They argue that critics form their judgment based on isolated gaffes. They concede that while Edler is prone to occasional mental mistakes, his overall play more than makes up for his turnovers.

While there are definitely people with beliefs in the middle, it seems like the vast majority of fans have a strong opinion of the Swede one way or the other.

To settle the debate once and for all, let’s take an in-depth look at Alex Edler’s overall play. In part one, we’ll analyze the blueliner’s defensive performance, with part two evaluating his offensive output.

The Importance of Context

When analyzing the performance of defencemen, context is often overlooked. If one were to simply sort by defensive metrics, such as expected goals against, you’d see names like Colin Miller, Kevin Gravel and Roberto Burtozzo near the top. This isn’t to say that these metrics are useless; rather it proves that one has to recognize the sheltered roles that each of these defencemen plays.

Unfortunately, there isn’t a consensus at this point in time with regards to quantifying the effect of deployment. Proven metrics that accurately adjust stats for factors like quality of competition simply don’t exist. Any deployment adjusted metric used would be an estimation at best.

Despite that, it’s important that we at least acknowledge a defenceman’s deployment and the potential ramifications of his role.

In Edler’s case, the matchups and ice-time he’s had certainly haven’t done him any favours.

The 2004 third round pick is leading all Canucks defenceman in averaging 22:07 a night. The chart above also validates the notion that he’s been consistently tasked to shut down the opposition’s best forwards.

Alex Edler’s defensive performance looks mediocre even when taking the aforementioned context into account though. (Note: to adjust for this season’s small sample size, I’ve expanded our timeline to include data from last season.)

His third-worst goals against rate (GA/60) indicates that the influx of shot attempts are resulting in additional goals against with Edler on the ice. Things don’t get any better when looked at the expected goals against model either.

The expected goals metric takes into account factors such as the opposition’s shooting volume, location, angle and the type of shot (eg: rebound, off the rush, etc). It’s a lot more indicative of one’s performance given that the traditional goals against rate doesn’t take luck into account. For example, Alex Biega’s team-best goals against rate of 1.81 per hour is misleading when his expected rate is 2.61 per hour — second worst on the team.

For Edler, his expected goals against rate still has him at third worst on the team. In fact, it ranks 205th out of 232 defencemen league-wide. It proves that the Canucks are deservedly allowing goals at a high rate with him deployed.

Unfortunately for Edler, the other underlying metrics don’t look much better either.

If there’s one silver lining to be found, it’s that he’s around the team average when it comes to controlling possession of the puck (CF%, FF%). This is a positive, as it means the Canucks don’t suffer from a major loss of possession when Edler is trotted out against the opposition’s best players. For reference, Tanev is around the same range as well.

What differs between these two, however, is what the opposition is able to do with the same amount of possession. Whereas Tanev is renowned as an elite shot suppressing defenceman, it’s clear that Edler is below average at shutting down shot attempts (CA/60, FA/60).

When it comes to quality of shots allowed (high danger Corsi against) Edler is once again middle of the pack — allowing 10.7 high danger attempts per hour. When studying a shot chart though, we can notice some tendencies. 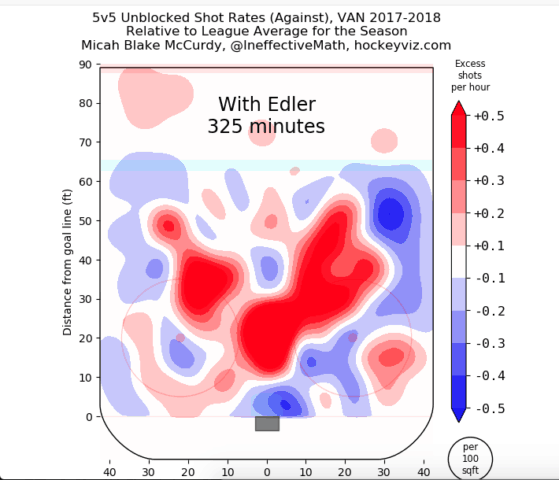 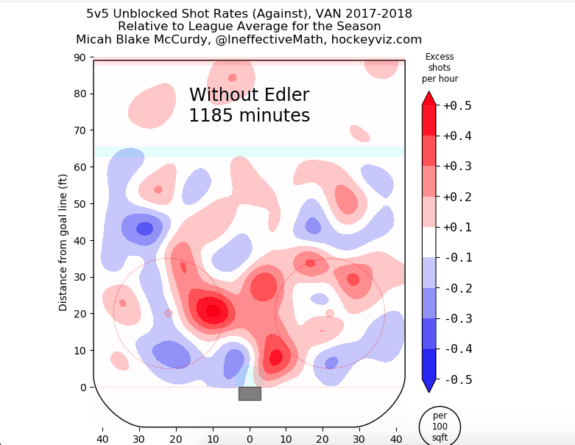 Analyzing the first chart relative to the second gives us an idea of what Edler succeeds and fails at in the defensive zone. Notice how with the first graph, the goalie’s crease has blue waves. This indicates that he uses his 6-foot-3 frame well to clear rebounds and prevent shot attempts from in tight.

On the contrary, the first chart also shows dark red waves around the slot. This suggests that while he is able to clear the front of the net, the opposition is able to get a high proportion of their shots from the slot. This counteracts Edler’s proficiency at clearing the goal mouth to create his middle of the pack high danger shot suppression rates.

For Edler, most of his defensive issues derive from his lack of mobility and speed. With every passing year and new injuries, it seems he’s getting slower and slower. The remedy for this is to become more positionally aware to maintain tight gap control at all times.

Unfortunately for Edler, gap control has proven to be an issue — one that’s exposed his lack of speed on counterattacks.

In this first clip, he makes a weak effort in lunging in for the puck. As soon as Couture avoids Edler’s stick, he’s off to the races. He lunges to try and break up the play because he knows he doesn’t have the speed to keep up with Couture in the neutral zone. 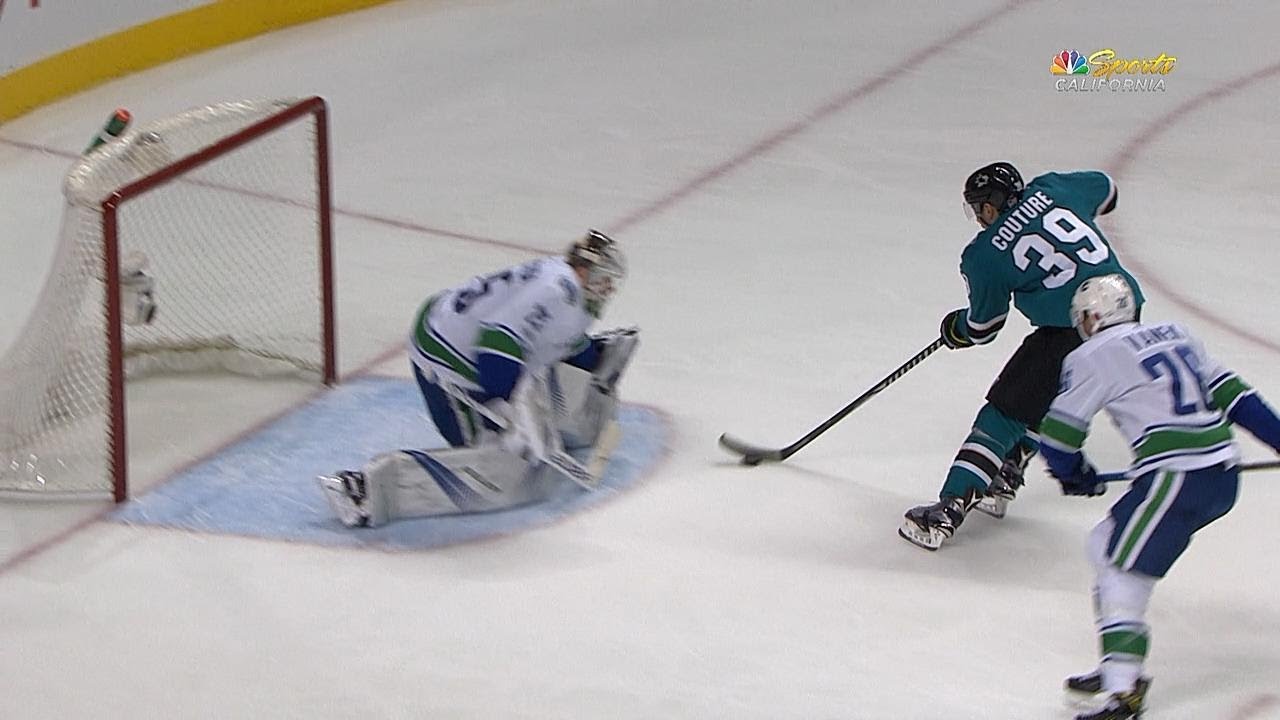 In this instance, Edler fails to maintain gap control. As Tierney cuts across anticipating a pass from Burns, Edler doesn’t shift laterally to his right with him. This means that when the pass is eventually made, he has no chance of closing down the space.

Other than improving positioning and gap control, another fix for this issue is to pair the slowing Swede with someone who has the speed and anticipation to close plays down in the neutral zone.

This is why players like Stecher and Pouliot have been so effective with Edler — they have the mobility and active sticks to close down and often break up transition plays in the neutral zone.

It’s statistically proven as well; Edler is controlling more than 50 percent of shots when paired with Pouliot this season. Take Pouliot away from him and suddenly he only controls 41.1% of possession.

While his even strength defence proved to be subpar, analyzing Edler’s shorthanded performance may paint a more accurate picture of his defensive abilities. This is because penalty killing is a lot less variable when it comes to quality of competition. Since the other team has the man advantage, it’s a guarantee that the opposition will deploy their most dangerous offensive players – meaning the quality of competition is pretty similar for every penalty killer.

Including data up till last season, Edler is second only to Tanev in spending nearly 222 minutes shorthanded. Despite this heavy workload, he has actually managed to perform well defensively.

While Edler’s raw shot attempts against rate is worst on the team, his Fenwick against (FA/60) rate is second best.

This bodes well for him, as FA/60 is a much better tool to use shorthanded compared to CA/60. This is because CA/60 includes blocked shots as attempts. When shorthanded, shot blocking is a very useful skill based off positioning and anticipation. Excluding these blocked shots with FA/60 is more accurate of defensive ability when down a man. Therefore, we should trust Edler’s FA/60 total much more than his CA/60 figure.

Another misleading stat is his goals against rate. The disparity between Edler’s GA/60 and xGA/60 indicates that he has been unlucky in allowing as many goals as he has. This assertion is confirmed by his team-low PDO of 84.2 during this span.

Using xGA/60 instead of GA/60 for a more accurate evaluation definitely helps Edler. He’s tied with Tanev in this regard for the best mark at 6.5. In fact, his and Tanev’s PK stats have the same trends in each metric used. These similar trends exist since the pair are deployed together when down a man.

This raises another question: how much is Edler benefiting from playing with Tanev on the penalty kill? To counter this, we can look at the Swede’s suppression totals both with and without Tanev.

There are two surprising things that jump out here. First is that his suppression totals actually improve across the board without Tanev. Not only is Edler allowing less volume when it comes to shot attempts, but he’s allowing fewer high danger attempts (high danger Corsi against, HDCA/60). This isn’t to say Tanev is dragging Edler down, but rather that he can more than hold his own on the PK without the Canucks’ best blueliner.

Even more surprising is that Edler allows goals at a higher rate despite an improvement in every underlying metric. This once again highlights just how unlucky he has been shorthanded.

Defensively, it’s clear that Alex Edler is no longer the rock that he used to be.

While overall possession isn’t a particular concern, he seems to be struggling to control the volume and quality of shot attempts against five-on-five. This is leading to a concerningly high amount of goals against even strength, with nothing to suggest that these numbers should improve.

On the contrary, he has still proven to be a decent penalty killing option. With the quality of competition evening out the battlefield, Edler is often found near the top when it comes to shot suppression metrics. When his horrid luck shorthanded evens out, he’ll bounce back as one of the better PK defenders for the Canucks.

Combining all of these findings together, we can definitely see that Edler isn’t a premier shutdown defenceman like he used to be. The big minutes that he’s been facing even strength are certainly starting to overwhelm him. That being said, his PK performance proves that he can likely still be an effective defender given a reduced role and a mobile partner.

Harman is a hockey contributor for Daily Hive Vancouver, The Canuck Way, and The Hockey Writers.