PITTSBURGH — Adam Henrique and Ryan Getzlaf each had a goal and an assist, and the Anaheim Ducks rallied past the Pittsburgh Penguins 4-2 on Monday night.

The Ducks won for the ninth time in 10 games after spotting the Penguins a two-goal lead. Henrique started the comeback with a power-play goal early in the second period and Getzlaf’s empty net tally in the final minute pushed Anaheim to its sixth straight road win. Ondrej Kase and Kiefer Sherwood also scored for the Ducks. 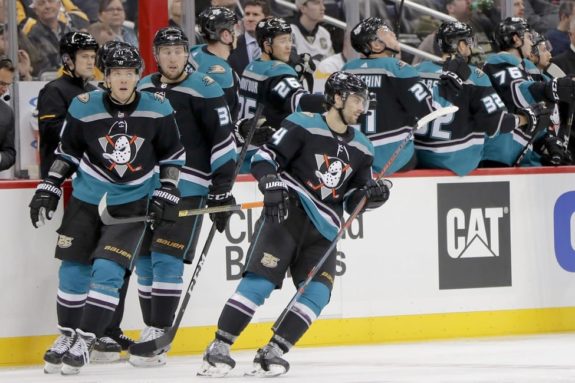 John Gibson, a Pittsburgh native, stopped 28 shots, including the final 24 he faced to pick up the victory in his hometown.

Evgeni Malkin got his 11th goal of the season for Pittsburgh and Bryan Rust added his sixth but the Penguins couldn’t cool off the Ducks. Casey DeSmith finished with 32 saves but lost for only the third time in his last 11 starts.

The Penguins have spent the last month slowly recovering from a sluggish start that at one point had them flirting with last place in the Eastern Conference. Yet even as they’ve pulled themselves back into contention — thanks in no small part to solid play by DeSmith — the Penguins are still sorting things out on the defensive end. They swept a back-to-back with Boston and Los Angeles over the weekend, games they won despite allowing a combined 92 shots.

Pittsburgh coach Mike Sullivan cautioned it’s not a formula that was sustainable. And for a brief stretch in the first period it appeared the Penguins were intent on buckling down. Pittsburgh jumped to a 2-0 lead on a power-play goal by Malkin 9:38 into the game and Rust followed with his fifth in four games when he jammed in a shot from the near post less than five minutes later.

However, deficits do little to deter the Ducks. Each of Anaheim’s previous nine victories came in games they were either tied or trailing heading into the final period. Anaheim didn’t wait that long this time to get back in it. The Ducks 19 consecutive shots during one stretch. Henrique’s power-play goal 2:07 into the second got Anaheim going. Sherwood streaked down the slot, took a feed from former Penguin Carter Rowney and fired a wrist shot by DeSmith to even the score at 5:33.

Kase then put Anaheim in front. Getzlaf won a draw in the left faceoff circle and flipped the puck on net. Kase jumped on the rebound with 1:13 left in the second to give the Ducks the lead.

Gibson made sure it stood up. He held firm as the Penguins made a push in the third period and Getzlaf’s empty netter with 49 seconds left gave Anaheim its third consecutive win over Pittsburgh.

NOTES: Pittsburgh fell to 6-1-1 against the Pacific Division. … Ducks F Daniel Sprong, traded from Pittsburgh to Anaheim in exchange for D Marcus Pettersson earlier this month, had an assist in 14:47. Pettersson skated 18:07 for the Penguins. … Pittsburgh D Kris Letang returned to the lineup after missing two games with a lower-body injury. … Penguins Fs Patric Hornqvist (concussion) and Dominik Simon (lower body) remain “day to day” according Sullivan. … Pittsburgh scratched Ds Chad Ruhwedel and Juusso Riikola and F Jean-Sebastien Dea. Anaheim scratched F Ben Street and D Andrej Sustr. … Anaheim D Hampus Lindholm played in his 400th NHL game. … The Ducks went 1 for 2 on the power play. The Penguins were 1 for 4.

Ducks: Continue a season-high six-game road trip on Tuesday in New York against the Rangers.

Penguins: Travel to Washington on Wednesday. The teams have split their first two meetings, both winning on home ice.

Maple Leafs Who Are Battling for Roster Spots