The Boston Bruins are now 22 games into the 2016-17 season. At this point in the season, the NHL playoff picture starts to take shape. A general goal for a team is to be in a playoff spot by Thanksgiving because the majority of teams in a playoff spot at that date tend to stay there.

Currently, the Bruins are sitting one point outside of the playoff picture with a record of 12-10-0. There is still a long way to go this season, but the Bruins are not in an ideal position right now. With the amount of games played, we can start to look at statistics to see where the Bruins strengths and weaknesses are. 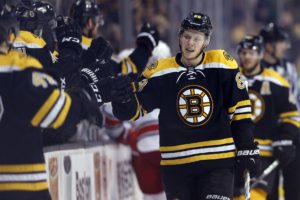 Last season, the Bruins were able to post the fifth best goals per game in the NHL. With many of the core forwards returning to the team this season, there was not a lot of concern over the offense. Unfortunately, the numbers say that the Bruins are not producing offensively.

Through 22 games, the Bruins have tallied 52 goals. That gives them a low 2.36 goals per game, which puts them 23rd in the NHL in that category. It is hard to win hockey games when you cannot produce goals most nights. Brad Marchand, David Pastrnak and Dominic Moore have produced 48 percent of the goals for the team. Pastrnak leads the way with 13 goals for the second-best mark in the NHL. It is quite clear some of the capable goal scorers are not pulling their weight.

When a team is struggling with goals, a common adjustment is to have players shoot more. More pucks to the net often creates more goals. That is not the case for the Bruins. They are currently putting 32.4 shots on net per game, the third-best average in the NHL. The pucks are getting there, but they are not finding the back of the net.

The defensive unit in Boston is nowhere near a top-notch group. However, they have been performing above expectations. The Bruins have been able to combine good enough defensive play with Tuukka Rask’s fantastic season to produce solid numbers.

Tuukka Rask has been one of the best goaltenders in the NHL this season. (Bob DeChiara-USA TODAY Sports)

Rask has been helping out his defense by posting a .940 save percentage, a 1.63 GAA, and three shutouts. Only 2.27 goals are scored on the Bruins per game, which is the fifth-best number in the NHL. Looking beyond Rask’s sensational season, the defense is not allowing a lot of shots to get to Rask. They are the third-best team in the NHL in shots allowed per game at 27.5. The defense and Rask are doing their part to position the team for wins.

Special teams statistics tell a very similar story of offensive issues versus defensive strength. Last season, the Bruins managed to put together the seventh best power-play unit in the league with a healthy 20.5 percent success rate. This season, the 18th ranked unit is only converting on 16.4 percent of their chances. The loss of Loui Eriksson appears to be hurting the power play as he registered 10 goals on the man advantage last year.

While the power play has been weak, the penalty kill has been strong. The Bruins are killing 86.7 percent of their penalties for the fourth-best penalty kill. Once again, the defense is doing their job to keep pucks out of the Bruins’ net.

So far, the Bruins have 12 wins versus nine different teams. Of the nine teams they have defeated, only three are currently in the playoffs. On the other side, they have lost 10 games to seven different teams with five them being playoff contenders.

While it is good news that the Bruins are beating up on below average teams, it is very concerning that they are having a hard time competing with playoff-bound teams. If the Bruins hope to move into the playoff picture, they are going to have to start putting together wins against the teams in front of them.

Three Players to Step Up

The words struggle and Patrice Bergeron rarely wind up in the same sentence, but he has struggled to produce points this season. Bergeron has six points, well below his normal pace of around 60 points. Even though he leads the team with 70 shots on goal, only three have found the back of the net. A lot is asked of Bergeron every year, but he typically answers well. His ability to produce points is a significant factor in the success of the Bruins.

David Krejci is also well behind is usual points pace. While he is third on the team in points, he only has two goals. He is putting pucks on the net, but his shooting percentage is an abysmal 4.5 percent. Krejci has the talent to pull the team out of their offensive slump; Boston just has to hope that his best days are not behind him already.

With the Blues, David Backes tended to float around 55 points per season. Right now he has nine points, which puts him on track for less than 40 points. For the most part, he has played well with his new teammates, but now he needs to start racking up some points. There is not a lot of pretty to Backes’ game, so the Bruins would benefit from him putting away the grinder type goals in front of the net. 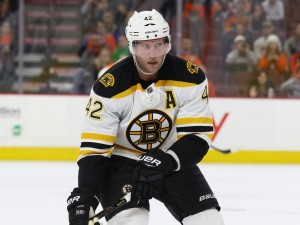 Since the Bruins are only one point out of the playoffs, there is still a decent chance to break the playoff drought. To do this, Rask and the defense need to continue their pace, and the offense needs to wake up. If Krejci, Bergeron and Backes can join Pastrnak and Marchand on the score sheet more often, things will start to look up in Boston. On top of that, Ryan Spooner and Matt Beleskey need to take charge of the third line to put the bottom-six forwards on the right track. There is a lot of work to be done, but the Bruins are capable of moving into the playoff picture.