When the Boston Bruins traded Adam McQuaid to the New York Rangers in September prior to the 2018-19 season, they appeared to make out like bandits. Not only did the Bruins get a fourth-round pick in 2019 as well as a conditional seventh-round pick and a depth defender in Steven Kampfer, but they also reduced their log-jam on defense and cleared up nearly $3 million in cap space in the process.

While the trade shouldn’t be seen as a mistake, it could ultimately come back to haunt them in the postseason if the Toronto Maple Leafs manage to acquire McQuaid prior to the NHL’s Trade Deadline.

While McQuaid may not necessarily seem like a game-changing defender, the world of professional sports works in mysterious ways. McQuaid potentially being acquired by the Bruins most likely first-round opponent in the playoffs just feels like it could end up haunting them given his importance to the team on and off the ice throughout his 462 NHL games in a Bruins’ uniform.

McQuaid is actually having a better offensive season with the Rangers this season than he had in Boston just a year ago. In 35 games this season, McQuaid has scored two goals and five points in 35 games compared to his one goal and four points in 38 games last season.

Impressively, McQuaid has also only taken 19 shots on the season giving him a very high 10.5 shooting percentage. To put that in perspective, McQuaid’s career-shooting percentage sits at 3.5%. That shouldn’t be too much of a concern for the Maple Leafs, though, as they wouldn’t be acquiring him for his offense.

McQuaid Brings Solid Defense on the Right Side

When it comes down to it, the 6-foot-4, 210-pound blueliner isn’t in the NHL to produce offense. He’s certainly not the defender you deploy when your team is down a goal in the crucial minutes of a postseason game, either.. What he does bring to the table, however, is solid third-pairing minutes and an enforcer mentality despite his history with injuries that have unfortunately continued to plague him this season.

The 32-year-old has averaged a hair under 18 minutes of ice time a night and has blocked 73 shots and made 96 hits. He’s also started nearly 60% of his even-strength shifts in the defensive zone according to Hockey Reference. which is a stark contrast to his usage in Boston. 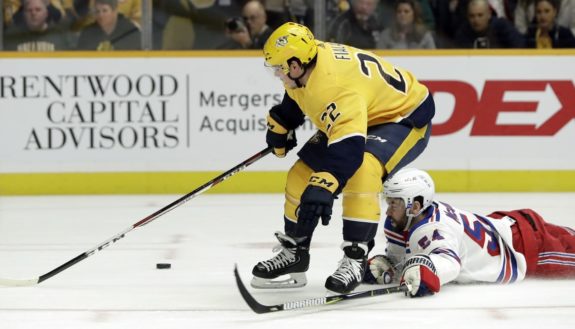 Though he’s always been more defensive than offensive, his deployment along with Torey Krug meant that he was often used on offensive zone faceoffs. Though he may be starting the vast majority of his shifts in the defensive zone now, he actually started 62% in the offensive zone just last season.

The Maple Leafs have a clear need on defense and even if McQuaid doesn’t fill a top-four role for their team if acquired, he can provide very solid defensive minutes to help close out a game on the right side.

McQuaid Would Fill a Need in Toronto

As it stands, the Maple Leafs are using Ron Hainsey, Nikita Zaitsev and Travis Dermott in their three right-shot spots on defense. Those names shouldn’t instill much confidence among Maple Leafs fans and is a stark dropoff from the left-side of their blue-line that features Morgan Rielly, Jake Muzzin and Jake Gardiner.

McQuaid may not be as big a name as Muzzin or as effective as a two-way defender, but he can certainly shore up a significant hole on a Maple Leafs roster that could legitimately be considered one of the Stanley Cup favorites given the strength of their top-nine forwards alone.

McQuaid would be an upgrade in Toronto and he wouldn’t break the bank in any way, shape or form. This would allow the Maple Leafs to either use more of their capital for potential deadline additions or retain valuable assets for the future.

When speaking about what the Rangers could be looking for as far as McQuaid is concerned after mentioning the Maple Leafs could be interested, Bob McKenzie had the following to say:

“The bar for them – they gave up Steve Kampfer and a fourth and a seventh to get him, but the Kampfer part of it was neither here nor there, that was just contract for a contract. I think the Rangers believe if they can get a fourth and a seventh for Adam McQuaid, or anything better than that, then they’re going to trade him because he’s on an expiring contract and they’re a rebuilding hockey team.”

All things considered, the Maple Leafs interest in McQuaid is something that should be on the radar of Bruins’ fans.

Should the Bruins regret trading McQuaid? Absolutely not. Should they lament a possible trade of McQuaid to their division rival and likely playoff opponent? It’s certainly fair to think so.

McQuaid isn’t the kind of player a team should fear as far as moving the needle in a postseason race goes. His history with the Bruins just seems like it could do Boston more harm than not if he is acquired by the Maple Leafs, though.

If the Maple Leafs opt to go in a different direction, the point could be rendered moot. Until the trade deadline passes and McQuaid isn’t in Toronto, however, the thought will be there one way or another.