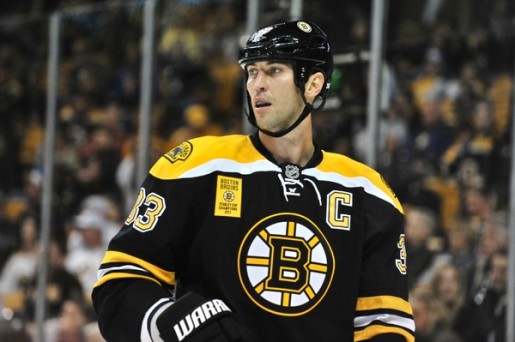 The Boston Bruins will make the playoffs. Despite having not ‘clinched’ a berth as of Tuesday morning, they sit seven points ahead of the ninth-place Buffalo with only six games remaining for the Sabres. Their recent streak of four wins in five games has earned them at least that much – and pulled all but the most die-hard Bruin doomsday-sayers out of their bunkers.

Of course what we don’t know (and probably ‘won’t’ until the final day of the regular season…), is who the B’s will be facing in the first round. While there are ten teams who the B’s could match up against, only five matchups exist on this plane of reality and they are as follows:

While it’s not exceedingly plausible, there’s a slim chance (approximately one in twenty-nine) that if either the Bruins or Cats tank in the next two weeks that the teams will meet in the first round. Each club currently leads their division by three points with games in-hand. The teams have split two games this season, with the Panthers earning the season series ‘victory’ by means of an OT loss (compared to two regulation losses for Boston). The Bruins hammered Florida in the final game before the Christmas break, 8-0, when they were still in the midst of their awe-inspiring two-month run.

Historically, the Bruins have dominated the recent series and haven’t lost back-to-back games to the Panthers since 2007. However, in the organizations’ lone meeting in the playoffs the Panthers easily handled the B’s in five and used it as a springboard to the franchise’s only (and unsuccessful) Stanley Cup Final in 1996.

When it comes down to it, the B’s would be favored in any series against Florida (barring some significant injuries) due to their status as defending-champion and the squad from Sunrise’s disconcerting goal differential (-20). Still, besides the eight-nil thrashing in December, the Cats have played the B’s tough each time and with Theodore and Clemmensen in net – both of whom have outstanding career numbers against the Black and Gold – no one could be sure of the conclusion.

In what would promise to be a highly-contentious series, the B’s and Sabres would match up thanks to Buffalo’s very impressive late-season run. The Sabres are currently tied with the Caps for the eighth and final playoff spot but would be out because of fewer regulation plus overtime victories (ROW). Because the B’s are unlikely to find themselves in the top seed, the Sabres would need to not only leap-frog the Caps – but also the Sens in order to find themselves in position to face the currently-second Bruins: It’s about a one-in-fourteen shot, but boy would it be an appealing matchup.

This season has been one of the more memorable and antagonistic between the old Adams Division foes. Milan Lucic’s freight-training of Sabres’ franchise ‘tender, Ryan Miller, will evoke ire in fans from the Queen City for years to come. That said, the Bruins have already won the season-series with a game yet to be played and barring one mid-February 6-0 dismantling, have looked like the better team.

The teams have alternated season-series victories back to the 2007-08 season, which they split. The B’s hold a 6-2 all-time postseason record against the Sabres including the most recent match-up in 2010, when the sixth-seeded B’s beat the Northeast Division-winning Sabres in six games in the East Quarterfinals.

While there would be plenty of pundits who’d place their bets on the white-hot Sabres (13-2-4 since Feb. 16), the fact remains that the Bruins are the better team – particularly when they’re emotionally invested and there are few teams that have managed to get the B’s as emotionally invested as the Sabres this season (looking at you, Patrick Kaleta). It wouldn’t be easy and Miller would likely steal a game or two but the B’s have to be favored.

The B’s have lost two of three to the Caps this season and are just 8-8-3 against Ovie’s club since Claude Julien took over the team in 2007. It’s not like the B’s haven’t done well in stopping number eight (in fact he has scored fewer points against the B’s than against any other Eastern Conference opponent), but it always seems to be the ‘lesser’ players – the Perreaults, Laichs and Theodores of the world – who burn the Bruins.

It’s not exactly probable that the Caps will visit the Bruins during the Thai New Year, (it’s about a one in nine chance), but it would definitely be an exciting match-up of a onetime favorite (that’s now on-fire as the underdog) and the defending Cup champs who only recently escaped from a late-season malaise. 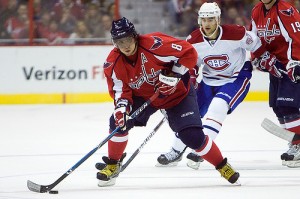 Boston has dropped two of three this season against the Caps thanks to a hat-trick from an unlikely source (Mathieu Perreault). It’s been a fairly competitive series but not a monumentally exciting one by Bruins’ standards. The B’s and Caps have only faced-off twice in the postseason and not in the past decade, splitting two series. The Bruins swept the Caps in the Wales Conference finals in 1990 and Washington knocked the Bruins out in six games in the 1998 Eastern Conference Quarterfinals (en route to their only Stanley Cup Final to date).

It goes without saying that any playoff matchup between these clubs would be highly competitive. The Caps would likely be the underdogs for the first time in the postseason since 2008 – and that might be just the thing for these frequent-favorites. Experience and grit is easily in the B’s corner, but this is the series that Bruins fans should be praying doesn’t come to fruition. Ovechkin is hot right now – and when he’s feeling it – hoo boy – look out.

While many thought that the Devils could make it back into the playoff picture following a disappointing 2010-11 season, few had them as a lock. The Devils are all but a sure bet to make the postseason and with Marty Brodeur in net and two of the elite wingers in the game (Parise and Kovalchuk) – anything’s possible. There’s about a one in six chance that the Devils and B’s meet in mid-April 2012 and, honestly, the Devils will be crossing their fingers that they won’t.

The Bruins have dominated the season-series with the Devils in 2011-12. They’ve won all four games (two by three or more goals) and only given up eight goals and a single overtime point in the process. Still, the Devils had the lead in each game. Tim Thomas started and won all four games. David Krejci had four goals and six points to lead all Bruins in the series.

Since the lockout, the teams have been fairly evenly matched, with the B’s winning thirteen to the Devils’ fifteen but lately the series has shifted in Boston’s direction, with the defending champs taking ten of the past sixteen contests. The Devils have won the last three of the four meetings between the two clubs in the postseason (most recently a five-game victory in the 2003 East Quarterfinals), Boston’s lone victory coming in seven games in the 1988 Wales Conference Finals.

Boston would undoubtedly enter as the favorite if the teams should meet in mid-April. The Bruins match up well against the middle-of-the-road Devils (in offense, defense and powerplay). The B’s inconsistent powerplay would end up as a significant storyline: Matching up one of their weaker attributes against the League’s best penalty kill. The Devils have good experience (they’re the second-oldest team by average age and oldest by weighted average age) but would be hard-pressed to contain a healthy B’s squad. 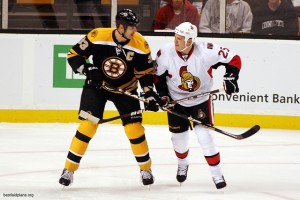 By far the likeliest matchup pits the B’s against their division-rivals, the Senators in the first round of the 2012 Stanley Cup Playoffs. Even if the B’s manage to stumble to the finish line and lose the division-lead, the Senators (as the likeliest team to replace them atop the Northeast) would probably find themselves hosting the B’s.

The Bruins and Senators have never met in the postseason. The B’s hold a tremendous edge in the all-time series, 64-32-15 (including a 20-0-2 stretch to begin their history), and Boston hasn’t lost back-to-back games against the Senators since 2007.

The Bruins had won eight straight games dating back to 2010 before they were shut-out by rookie netminder, Robin Lehner to end the Bruins’ abysmal month of February. The Bruins have capitalized on numerous turnovers from the Sens in their own zone this season and seem to be able to mitigate Ottawa’s impressive offensive attack. There have been a few questionable (some would say ‘dirty’) plays in the season-series which will certainly make a best-of-seven between the clubs even more entertaining.

With the weakness of Ottawa’s defensive game (they have allowed the most goals-per-game of any team with a decent shot at postseason action) and the renewed strength of Boston’s own-zone play and depth scoring, this could be a series that gets over quickly. Still, the Sens have proven doubters wrong all season long – and while I can’t expect them to win, I do expect this matchup to be competitive.