Loui Eriksson’s second year in Boston was one of redemption and a return to form.

The 29-year-old suffered two concussions in a nightmare 2013-14 campaign, limiting him to a career-low 10 goals and 37 points in 61 games. He was the featured player Boston got back in the Tyler Seguin trade the previous summer. Eriksson, through no fault of his own, could not fulfill the expectations Bruins fans had of him that year.

This season was a much different story. With a clean bill of health, Eriksson played 81 games this season posting 22 goals and 47 points. The right winger reached the 20-goal mark for the fifth time in his nine-year career, playing solid hockey alongside Carl Soderberg and Chris Kelly on the third line.

The club itself may have had an underwhelming season, but Eriksson did his part to keep the Bruins in the playoff hunt all the way to the end.

Per Hockey Sweden, #Bruins forward Loui Eriksson has accepted an invitation to play for Team Sweden at the World Championships in Prague.

Once the Bruins season ended, Eriksson traded in the Black and Gold of his club for the Blue and White of his country.

Head coach Par Marts put Eriksson on Sweden’s top line alongside Forsberg and Edmonton Oilers prospect Anton Lander with Ekman-Larsson and Klingberg on defense. It was a star-studded starting five for Tre Kronor as they looked to improve on a Bronze medal finish in this event last year in Belarus.

Eriksson and the Swedes were in tough playing alongside Canada, Switzerland, and the Czechs in Group A.

Piling Up The Points

Sweden played in an 11-goal thriller in their opening game against the Czech Republic, winning 6-5 in overtime. Eriksson was not involved in any of his team’s six goals.

The six-foot-two-inch forward would see his name on the scoresheet often over the next few games. He recorded two assists and a team-high plus-4 rating in Sweden’s 6-1 victory over Austria. It was an all-around solid performance for the number 21. 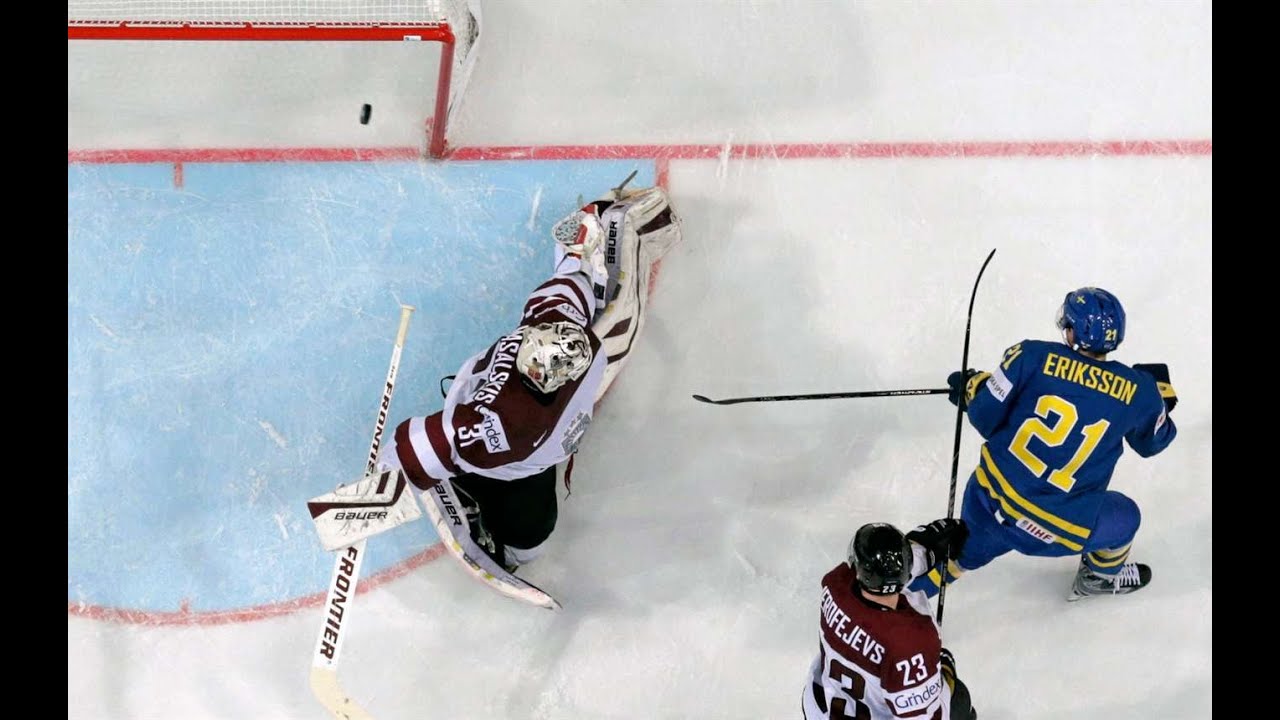 Eriksson one-upped himself in Sweden’s next game against Latvia. He recorded a hat-trick, scoring three of Sweden’s first four goals in an 8-1 triumph. The Bruins leader in power-play goals this season scored twice on the man advantage to propel his club to a third straight victory.

Eriksson followed up his hat trick with another solid performance against the Canadians. Two more assists and a team-high plus-3 rating were not enough however as the Swedes were handed a 6-4 defeat, their first loss of the tournament.

All in all, Eriksson tallied seven points in just three games, sustaining the momentum he gathered during his second season with the Bruins.

Sweden finished second in Group A but eventually bowed out in the quarterfinals against the Russians.

Even though his country suffered a disappointing end to their tournament, Eriksson kept his impressive season going. He led the Swedes in points (10), assists (6), and plus/minus (+5) during their World Championship run while playing over 20 minutes in six of their eight games.

After an impressive year, things are looking up for Eriksson. The Bruins will be keen to consider slotting him alongside either David Krejci or Patrice Bergeron in a top-six role next season. Boston’s scoring troubles were well documented this season as Krejci lacked a potent right winger on the top line while Reilly Smith was a huge disappointment on Bergeron’s second line.

Eriksson put up an impressive 22 goals playing on the third line this season and could easily eclipse that mark playing alongside either Bergeron or Krejci next year.

For the Bruins, the possibility of trading him away gets a little more enticing as well. Boston is facing some big decisions with their roster; chief among them is re-signing defenseman Dougie Hamilton. Cap space is at a premium and some of the Bruins’ higher priced players could be trade bait to free up some cash.

Eriksson is on the books for $4.25 million next season before hitting free agency next summer. His solid play between Boston and Sweden at the World Championships could enable the Bruins to explore trade options. In a poor free agent class this summer, he could be an intriguing player for opposing teams to inquire about.

Loui Eriksson’s return to form was a welcome sight for both Boston and Team Sweden.

After two concussions last season, a solid performance this year is a sign of bigger and better things to come for both he and the Bruins going forward.