Hintz scored in a mad scramble in front of the net after Alexander Radulov’s shot bounced off Los Angeles goalie Jonathan Quick. The win moves the Stars into a wild-card spot in the Western Conference. 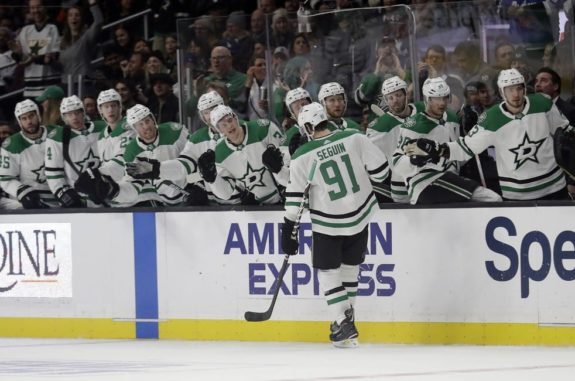 Anze Kopitar scored two goals and had an assist for Los Angeles, which has dropped 10 straight — the second-longest losing streak in franchise history. Brendan Leipsic had a goal and Quick stopped 29 shots.

Faksa tied it at 3 at 9:53 of the third when he scored his 12th of the season on a rebound of a slap shot by Comeau. Quick made a nice stick save to rob Jason Dickinson of a goal with five minutes to go in the third.

Los Angeles took a 2-0 lead in the first period. Kopitar opened the scoring at 7:57 when he tapped in Sean Walker’s pass. The Kings extended their lead at 13:28 on the power play as Drew Doughty’s shot from the point deflected off Leipsic, who got his fifth goal of the season.

It was Los Angeles’ first power-play goal in six games and broke a string during which it had not converted in its last 15 opportunities.

Dallas cut the lead in half 80 seconds later when Seguin took Taylor Fedun’s pass near the crease and beat Quick on his stick side. The Stars then tied it at 2 6:14 into the second on Janmark’s backhander in front of the net.

Los Angeles regained the lead at 11:46 of the second on Kopitar’s team-leading 19th goal of the season. Khudobin made a pad save on Tyler Toffoli’s wrist shot, but Kopitar was able to corral the rebound and put it into the net.

Dallas centre Andrew Cogliano missed his first game due to injury in his 12-year career. Cogliano flew back to Dallas to get treatment after suffering a shoulder injury during Tuesday’s loss to Vegas.

The only two games Cogliano missed previously were due to a suspension last season when he was with Anaheim. That suspension broke a streak of 830 consecutive games played, which was the fourth-longest in NHL history. The Stars acquired Cogliano in a trade with the Ducks on Jan. 14.

NOTES: Dallas LW Jamie Benn and Los Angeles LW Ilya Kovalchuk were both scratched due to upper-body injuries. … This was only the sixth game this season where the Kings have scored two or more goals in the first period. … Seguin has eight goals and 19 points in 21 career games against the Kings.

Stars: Travel to the St. Louis Blues on Sunday to complete a four-game road trip.