Possible representatives for the Eastern Conference are the Tampa Bay Lightning and New York Rangers, while the Anaheim Ducks and Chicago Blackhawks could possibly represent the Western Conference. Both Conference Final match ups needing seven games to decide a winner is not a common occurrence either.

Both Conference Finals series require a Game 7 for just 2nd time in expansion era (since 1967-68). The other instance was 2000. #StanleyCup

Out of the four possible Stanley Cup Final combinations only one can live up to the hype that surrounds the culmination of the Stanley Cup Playoffs. A Rangers versus Ducks final should be the series everyone is hoping for and here’s why.

Hockey fans love action, they love wide open play and fast paced momentum swings. A Stanley Cup Final that puts players like Corey Perry, Ryan Getzlaf, Rick Nash and Derick Brassard on the ice against one another a possible seven times in a row should have every hockey fan drooling at the mouth.

A game featuring the four skaters mentioned with other players like Ryan Kesler, Patrick Maroon, Ryan McDonagh and Dan Boyle sprinkled in has all the offensive talent and in the corners grit anyone could dream of. A series featuring the speedy Carl Hagelin and Jakob Silfverberg has back and forth action written all over it.

The Stanley Cup Final needs drama, it needs action and it needs to keep people on the edge of their seats. The players sitting on the Ducks and Rangers benches night in and night out will provide that and more.

Of course this is not saying the Blackhawks and Lightning lack the All-Star power needed for a Stanley Cup Final, with players like Patrick Kane, Jonathan Toews and Steven Stamkos that would be an idiotic assumption. But The Rangers and Ducks should get the nod because there is much more outside of just All-Star talent brought to the table.

2. The King Defending His Throne

In an earlier article I went over how each Conference Final featured a lesser known goalie trying to prove their worth versus an older already established goalie. These storylines have driven both Conference Finals and a series between Henrik Lundqvist and Frederik Andersen would give the fans one final chapter in the young stud versus aged veteran novel that is the 2015 Stanley Cup Playoffs.

There is no doubt why Lundqvist has grabbed the nickname “King Henrik”. In his lustrous career, Lundqvist has amassed 339 regular season wins, a .921 save percentage and has an Olympic gold medal and Vezina Trophy to his name. The last thing for Lundqvist to check off the list, his name on the Cup. Lundqvist is 15-3 in his last 18 games where he faced elimination, if Lundqvist continues to be Mr. Reliable he may get another shot at checking that last task off the list.

If their was ever a case of the King meets the King Slayer Lundqvist versus Andersen would be it. Through out much of the first three rounds of the post season Andersen has been the goalie to beat. Andersen opened this year’s playoffs with a 9-1 record through his first ten games. Andersen now boasts a .919 save percentage, second to only one starting goalie remaining in the playoffs. You guessed it, Lundqvist.

A Stanley Cup Final putting an already established heavy weight in the crease against a young up and comer would bring forward nonstop storylines and drama. 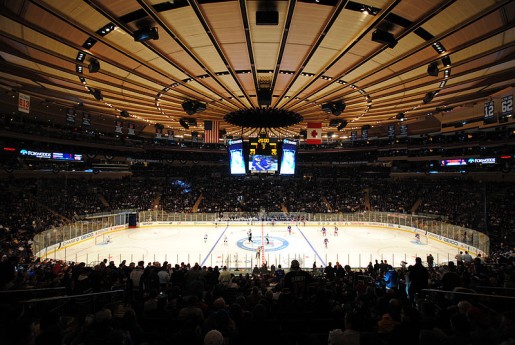 Of course Anaheim isn’t Los Angeles, and the ties into Hollywood and the second biggest media market in the United States won’t exactly be there if this match up happens. But the bright lights and non stop movement of New York, versus the sun soaked beaches of California is still there and still as profitable.