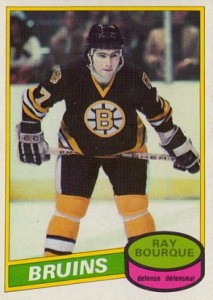 When pictures of excellence come to mind in the hockey world, one’s thoughts often turn to the likes of Mario Lemieux, Wayne Gretzky, Maurice Richard, and Bobby Orr; and rightfully so, for these names serve as some of the solid foundation upon which NHL hockey excitement was born.  Today, in the first edition of Flashback Friday, I want to look at one of the stalwarts on the blueline, a defender among defenders, Ray Bourque.

Raymond Bourque was drafted by the Boston Bruins in the 1979 NHL Entry Draft, eighth overall.  Bourque was actually the Bruins’ second choice that year, as Bruins GM Harry Sinden wanted to select Keith Brown.  Brown was selected by the Chicago Blackhawks before the Bruins could get a hold of him, and they had to “settle” for Bourque.  As it turned out, Bourque wouldn’t be a bad consolation prize!

Bourque made his presence felt in his first season, notching 65 points, winning the Calder Trophy for Rookie of the Year in 1979-80 (hard to imagine, I was three years old at the time), and gaining a First Team All-Star selection.  Not bad for a player who was thought to be a second choice!

Bourque swiftly became a fan favorite, earning accolades by his stellar defensive awareness and his laser-accurate shot.  He was the cog that made the Bruins work; while enjoying a relatively injury free career, the Bruins were known to struggle when #77 was out of the line.  He was also known for resigning any new contract with the Bruins quickly and quietly, showing his loyalty to the Bruin organization by leaving millions on the table to sign team-favorable contracts.  By the mid-eighties, Bourque had earned the captaincy of the Bruins, and he exemplified everything a team captain should be.

Birth of a Legendary Number

When he entered the league, Bourque wore #7, a number most associated in Bruins’ lore with superstar sniper Phil Esposito.  In December of 1987, the Bruins decided to retire #7 to the rafters, immortalizing Esposito.  The on-ice ceremony produced one of the greatest moments of class on NHL ice:  Bourque skated over to Esposito and took off his #7 jersey, revealing the #77 underneath.  Bourque surrendered the #7 to Esposito, and his new number, #77, became his jersey number for life.

Ray Bourque was also on the ice for two of superstar Mario Lemieux’s career highlights.  In Lemieux’s rookie season (1984-85) with the Pittsburgh Penguins, in his first game, on his first shift, he stripped Bourque of the puck and scored his first goal of his career.

In 1992, the Penguins and Bruins clashed in the Wales Conference Finals for the second straight year.  Lemieux scored the goal of the series while shorthanded, sliding the puck through Bourque and scoring a dramatic goal in the process.  The Bruins were eliminated in four games that season.

After several seasons, despite two trips to the Finals in 1988 and 1990, it became apparent that Ray Bourque would not win a Stanley Cup with Boston.  He requested a trade to a Cup-contender, and the Bruins obliged by sending Bourque and Dave Andreychuk to the Colorado Avalanche for Brian Rolston, Martin Grenier, Sammy Pahlsson, and a first round draft pick.

The Avalanche fell short in their first playoffs with Bourque, falling in seven games to the Dallas Stars in the Western Conference finals.  The next season would be different; the Avalanche, fuelled by the hatred of losing, advanced to the Stanley Cup Finals against the defending champions from New Jersey.  The Devils and Avalanche put on one of the best Finals in recent memory, with the Avalanche rallying from a 3-2 series deficit to capture the franchise’s second championship…and the first for Ray Bourque.  After 22 seasons in the league, Ray Bourque was finally a Stanley Cup champion.  Game 7 of that series would prove to be Bourque’s final game, as he announced his retirement from the NHL shortly after.

–Inducted into the Hockey Hall of Fame in 2004

–Jersey #77 retired by both Boston Bruins and Colorado Avalanche

Born in the Annapolis Valley of Nova Scotia, and living in Port Williams, Nova Scotia, Justin has been involved with hockey for over 15 years. He has written for local newspapers from 1994-2009. He brings a combination of passion and humor to his articles that frame his love of hockey. His style includes opinion pieces and historical fact. He finds game reviews “boring on their own” and aims to bring each piece to life in its own way. He currently owns www.openingfaceoff.net, and is looking forward to contributing regularly to thehockeywriters.com.