Josh Brown and Dryden Hunt each scored their first NHL goal as Florida earned its second straight win since a costly six-game slide. Jonathan Huberdeau had a goal and an assist, and Jamie McGinn and Frank Vatrano also scored.

Making his third NHL start, Sam Montembeault stopped 19 shots as the Panthers finished their season series against the Red Wings with a 3-0-1 record.

The 23-year-old Barkov had at least 21 goals in each of the previous three seasons, but he had never got to 30 until he made it 6-1 7:44 into the third period. He also picked up his 47th assist when Huberdeau scored the first of Florida’s three third-period goals. 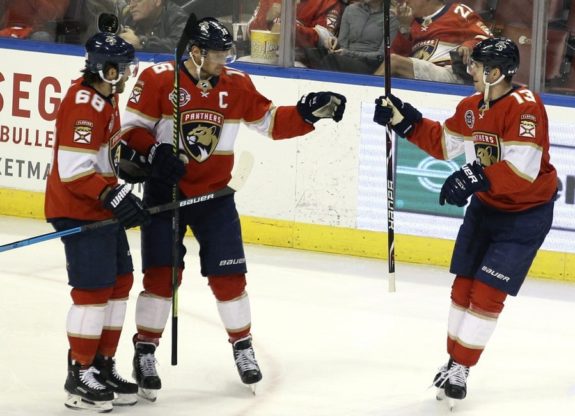 Barkov has 24 points in his last 13 games. It was the 400th NHL game for Florida’s captain, who had a club-record five assists Friday against Minnesota.

Thomas Vanek had a power-play goal for Detroit, which dropped to 1-7-3 in its past 11 games. Jimmy Howard had 37 saves.

The Panthers scored twice in their first nine shots during an impressive first period.

Troy Brouwer held the puck on a rush, skated in backward below the goal line and fired a slick pass back to Brown, trailing in the high slot. The defenceman then beat Howard on the glove side at 6:42.

McGinn scored just 13 seconds into a power play when he shoved in a rebound of Aaron Ekblad’s blast from the left circle for his third goal at 9:22.

Vatrano kept a puck alive in a board battle in the second period, and Mike Hoffman slid a pass around to Ekblad, who fired a shot that Vatrano deflected in for his 21st goal and first in 12 games.

Vanek cut the deficit to 3-1 with his 14th goal at 12:24, converting a one-timer from the left circle off a pass from Frans Nielsen.

Opening the third period on the power play, Florida went up 4-1 when Evgenii Dadonov threaded a pass on Huberdeau’s 22nd goal, and Hunt made it 5-1 when he scored off a clever pass from Riley Sheahan at 2:51.

NOTES: Detroit C Dylan Larkin (back) missed his third straight game. The 22-year-old Larkin, who has a team-best 27 goals and 35 assists, will be re-evaluated on Monday and is expected to return this season. . Brown’s first NHL goal came in his 24th game, Hunt in his 33rd.

Red Wings: At Montreal on Tuesday.

Panthers: At San Jose on Thursday.