Advancing through the rigorous rounds of the NHL playoff ladder is one of the most difficult tasks in professional sports. A fully healthy and talented team experiences plenty of ups and downs on their bruising march to the Stanley Cup. The Boston Bruins’ slightly above average roster came into the playoffs as an underdog to win the Cup, but injuries to key players have started to decrease their already low odds of raising another banner.

Throughout the regular season, the Bruins were lucky not to have to endure too many lengthy injuries. Just a few weeks ago, the roster was healthy and looking to make a charge through the Eastern Conference bracket, but when the injury bug bites, it bites hard. Six players sit on the Bruins’ injury list, and the club is missing their unique abilities dearly as they try to eliminate the Ottawa Senators from the playoffs.

The most baffling injury to the roster has been David Krejci’s lingering upper-body injury. Krejci played all 82 games in the regular season but was surprisingly held out of Games 1 and 2 against the Senators. He did not practice on Easter Sunday, and his status for Game 3 on Monday is unclear, although he is listed as day-to-day.

Throughout his career, Krejci has been lethal in the playoffs with 77 points over 93 playoff games. The Bruins have relied on his ability to elevate his game on the big stage, and his absence is noticeable when the second line is struggling to produce offense. Ryan Spooner has slid into his center position on the second line, but replacing one of the best playoff performers in the NHL is almost impossible. When he returns, he should add an instant spark to the top-six forwards.

Arguably the biggest loss the team has suffered came on Apr. 6 when Torey Krug went down with a lower-body injury. Krug ranked seventh among NHL defenseman in points this season after tallying 51 points over 81 games. The blue-liner has not touched the ice since leaving the game on Apr. 6, and it appears he will not be returning anytime soon.

Torey Krug just left the Garden on crutches with a big, bulky brace on his right knee. So that's not encouraging Bruins news

When playing against the Senators’ stingy trap, moving the puck is vital, and Krug is the best puck mover on the roster. It is not difficult to figure out why he is essential to the success of the Bruins, especially against their Atlantic Division rival. On top of his transition play, he played top-four minutes and was the quarterback on the Bruins’ strong power play. There is no replacing what Krug does for the Bruins, which has fans begging for his return.

After a nasty knee-on-knee collision with Senators forward Matt Borowiecki, Colin Miller left Game 1 and was sidelined for Game 2 as well. Miller has had an up and down season, but his tremendous skating ability is something the Bruins could have utilized in this series. Joe Morrow, his replacement, doesn’t have the experience and ability to replace what Miller does. Once he returns, the ability of the defense to be mobile and create offense will be lifted a great deal.

In the last game of the regular season, Brandon Carlo awkwardly collided with Alexander Ovechkin of the Washington Capitals and left the contest. The injury has forced him to miss the first two playoff games and he is doubtful to return to action in Game 3. 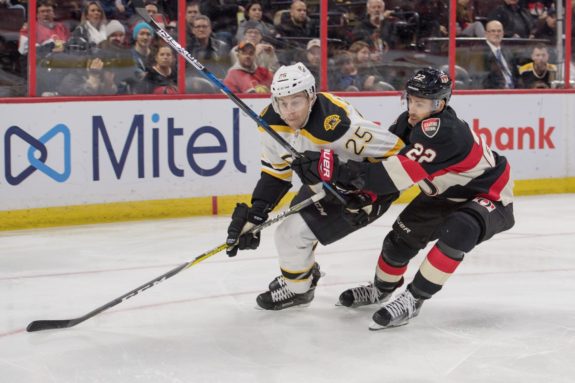 The rookie defender played over 20 minutes a game next to Zdeno Chara and was impressive much of the season in the defensive zone. The biggest challenge coming with his injury is filling the heavy defensive zone minutes. On an already weakened defense, it is tough to find a reliable replacement for an entire playoff series.

Adam McQuaid was the latest Bruin to take the long walk to the locker room after he was forced from Game 2 in the first period. He has played through injuries in the past, so fans could see him back sooner rather than later, but his status for Game 3 is still up in the air. McQuaid does not add much offensively, but he battles hard in the defensive zone and was going to take on some of the minutes Carlo normally would have. He his often used with Chara towards the end of games to protect a lead as well, creating a hole in the lineup that will be hard to fill.

Fourth-line forward Noel Acciari has been out the lineup for the past three games with an upper-body injury. Towards the end of the season, he cemented his spot on the line and was playing rather well. Coach Cassidy recently delivered good news stating, “There’s a good chance he’ll draw back into the lineup” for Game 3 on Monday night. If he does suit up, he will bring a physical brand of hockey back to the fourth line, helping the Bruins establish energy and pressure in the offensive zone. Acciari may not play big minutes, but when he is on the ice, his presence is felt instantly.

Health updates from Cassidy: Noel Acciari "looks like he'll be available" for Game 3. "We'll have a decision to make."