Wayne Gretzky had a half decent 1988-89 season with the Los Angeles Kings. In 78 games, he notched 54 goals and 114 assists, for a grand total of 168 points for his new team. Pretty jaw-dropping numbers, right? It was no surprise that “The Great One” was awarded his eighth and final Hart Trophy of his legendary career. Despite having hall-of-famers like Marcel Dionne, Luc Robitaille and Rob Blake play for the silver & black, Gretzky’s feat marked the first and only time that a King has taken home the highly sought after hardware.

The Case for Kopitar

Kopitar was named captain of the Kings at the onset of the 2016-17 season and proceeded to have the worst statistical year of his seven-year career. His feeble output ignited the fear in Kings fans that he was not ready to absorb the burden associated with being captain. Fortunately, the 30-year-old center has come back with a vengeance.

The Kings captain started off the 2017-18 season with a blistering 14 points in 12 games during the month of October. It’s not a surprise that the team won nine of those games. Over the subsequent four months, Kopitar has managed to sustain this prolific rate: 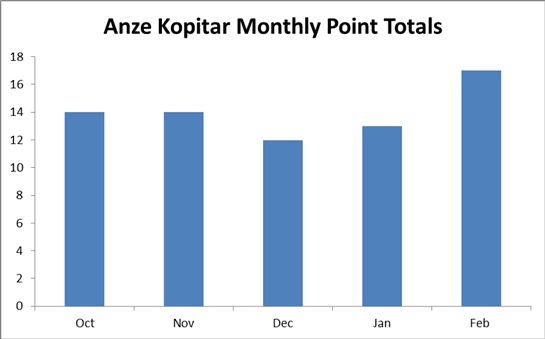 Fortunate for the Kings, Kopitar has not taken his foot off of the gas pedal in the month of March. He has amassed 10 points in eight games, highlighted by a monstrous four-point performance against the Detroit Red Wings on Mar. 15.

He is beginning to earn every penny of the eight-year, $80 million contract he signed in Jan. 2016. As of Tuesday night, the six-foot-three Slovenian ranked eighth in the NHL points race with 80 points in 72 games. What is just as impressive is his team-leading 29 goals, only five have come on the power play. Also, he has long been praised for his two-way game, and his plus-15 rating this season lends credence to that.

How Kopitar Can Win the Hart

A confluence of things would need to transpire for Kopitar to win the Hart:

Kucherov has consistently been the most deadly forward in the NHL this season. He has an absurd 93 points in 70 games and has been instrumental in the Tampa Bay Lightning’s Eastern Conference-best 102 points through 72 games.

Kucherov would likely need to go radio silent over the final 10 games of the season to be anything but the front-runner for the Hart.

Is this the year that Malkin wins his second Hart Trophy? Long overshadowed by his worldly teammate, Sidney Crosby, “Geno” has been downright spectacular this season, netting 89 points in 68 games. Despite a sluggish start for the Pittsburgh Penguins, he has managed to propel his club to the precipice of leapfrogging the Washington Capitals for the Metropolitan Division lead.

To help Kopitar’s plight, Malkin and the Pens would need to pump the brakes on their winning ways for the rest of the regular season. In addition, a first-round playoff exit would also help the cause.

MacKinnon is quickly becoming everyone’s flavor of the year. The 22-year -old speed demon has enjoyed a stupendous season. His 89 points in 64 games have been one of the main reasons for the expedited resurgence of the Colorado Avalanche. Furthermore, he is getting sizzling hot at the right time – scoring six goals and 10 points in his last five games.

The Avalanche would need to hit a wall and narrowly miss out on a playoff birth for MacKinnon to fall out of favor with voters.

Last, and certainly not least, is McDavid. The incumbent Hart recipient is undoubtedly the most dominant player in the NHL. However, his Edmonton Oilers have been dominated more often than not this season. Despite their paltry 67 points in 72 games, McDavid has managed to put himself into a three-way tie for second place in the points race with Malkin and MacKinnon.

McDavid would need to go into “beast mode” over the last 10 games of the season in order to overcome his team’s disappointing year. The Oilers center will likely have to wait until next year to add to his ever-growing trophy case.