It’s no secret that Los Angeles Kings general manager Dean Lombardi is typically aggressive at the trade deadline in order to bolster his team’s playoff chances. Let’s take a look at some of his deadline acquisitions in recent years:

Although Sekera ended up being a rental (and net loss) for the Kings, the others helped the club beyond that season’s stretch drive. In the cases of Gaborik, McNabb and Carter, they remain key cogs in the team’s engine today.

Who Have the Kings Been Linked to in Trade Deadline Rumors?

Who haven’t they rumored to be in the mix to obtain?

The list of defensemen was considerably shorter and likely rendered moot following the team’s trade for veteran blue liner Rob Scuderi. Given that the Kings currently boast the lowest goals against average in the league and with Scuderi in tow, let’s save bandwidth and make the assumption that if a deadline deal or two remain in Lombardi’s plans, he’ll be attempting to bolster the team’s fourteenth-ranked offense — especially in the wake of Marian Gaborik’s recent injury.

Three Players Who Make Sense for Los Angeles to Pursue

As we all know, the trade deadline is an extraordinarily fluid period of time in the NHL. By the time this piece is posted, a number of the players identified as available could well be on their way to new teams. With that as a codicil, let’s take a quick look at three players that may make the most sense for L.A. to acquire. 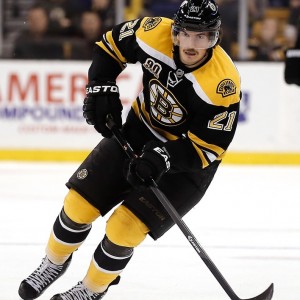 Loui Eriksson. If Lombardi could somehow find the assets necessary to wrest him away from the Bruins, Eriksson would no doubt make a huge impact on a team that’s been struggling to score since the beginning of the year.

The 6’2″, 183 pound winger has 23 goals and 48 points (+13), shooting at a sizzling 17.4% clip. Is that sustainable? Probably not, but with six seasons of 22 or more goals on his resume, he’s a legitimate scorer. Eriksson is fourth among Boston forwards in Corsi (51.9% CF), which makes him a good fit for a possession-dominant club like Los Angeles. Lastly, although not rich in playoff experience (34 games), at least he’s been there before.

The downsides? He’s not particularly fast, makes $4.5 million and reportedly, the Bruins are asking for … wait for it … a king’s ransom. The rumored price is a first round pick plus a middle-of-the-road prospect. Since L.A. doesn’t have a first rounder this year, that would mean (in theory) they’d be forfeiting 2017’s pick.

P.A. Parenteau. He’d be cheaper than Eriksson and glancing at his measurables, profiles to be a very good fit for Los Angeles. His Cori numbers are even better than Eriksson’s — 53.5% CF% this year — and he’s considerably faster, a commodity the Kings could certainly use.

This year, Parenteau has scored 15 goals and put up 32 points in 59 games. Clearly, he’s not the offensive threat Eriksson can be, but he wouldn’t cost nearly as much in assets to acquire. His $1.5 million cap hit would make the salary cap math easier as well.

Jamie McGinn. Admittedly, the drop-off is significant and it’s highly questionable whether or not McGinn would make for a legitimate top six forward on a team far superior to Buffalo. Also, McGinn’s possession numbers (47.6% CF this year, about the same as his career average) are a negative.

His positive attributes include being younger (27), relatively cheap ($2.95 million cap hit), and bigger (6’1″, 205), with a front-of-the-net style that could mix nicely with the Kings’ grinding offensive system. No, he won’t replace the pure sniper threat Gaborik represents, but assuming he returns in time for the playoffs, the addition of McGinn would make L.A. even more dangerous than usual. That would be a particularly scary thought for Western conference opponents.

What do you think? Should Lombardi get busy at the deadline and pick up one of these forwards? If not, is there someone else that you feel makes sense, or should the Kings just stand pat? Leave your thoughts below, or message me @McLaughlinWalt.