October is Breast Cancer Awareness Month and teams and fans throughout the Ontario Hockey League got involved in raising money and awareness for this important cause.

Since 2010, teams across the league have dedicated a game during the season, usually in October, towards Breast Cancer Awareness. Anything that can go pink generally has – jerseys, hair, sticks, skates, socks, laces and more. It has become a significant game on schedules and one that players and fans alike look forward to.

This season, many teams are continuing in the cause.

The Battalion joined with the CAA for their “Pink in the Rink” night on Oct. 13. The Battalion dressed up in pink jerseys for their game against the Hamilton Bulldogs. The jerseys were auctioned off afterwards with all proceeds going to the Canadian Cancer Society. North Bay also had a Chuck-A-Puck contest during the second intermission with CAA, Battalion and Canadian Cancer Centre prizes given out. Approximately $16,000 was raised in total according to the North Bay Nugget.

The Bulldogs returned the favour on Oct. 23 as they hosted the London Knights for their “Pink-in-the-Rink” game. The jerseys the Bulldogs wore during the game were autographed and auctioned off. All proceeds went to the CIBC Breast Assessment Centre at Juravinski Cancer Centre.

The Frontenacs have been a team that’s proudly contributed to this cause for years. This year was their sixth-annual “Pink-in-the-Rink” game as they hosted the Sault Ste. Marie Greyhounds on Friday, Oct. 14. They auctioned off both pink jerseys and pink socks for the cause with proceeds going to the Canadian Cancer Society.

The Fronts also came up with Survivor Walk, where cancer survivors and their supporters could walk a lap around the rink during the first intermission. Finally, Kingston came up with a Pink Pack – a limited edition pink shirt, a ticket to the Pink in the Rink game and a $5 donation to the Canadian Cancer Society – for $25.

The Spirit got involved on Saturday, Oct. 22 as they hosted Kingston. They wore special pink jerseys and donated the auction proceeds to local charities.

The Spitfires teamed with local business G & K Services to host their annual “Stick it to Cancer” night on Thursday, October 27 when they battled the Greyhounds. Check out their video below: 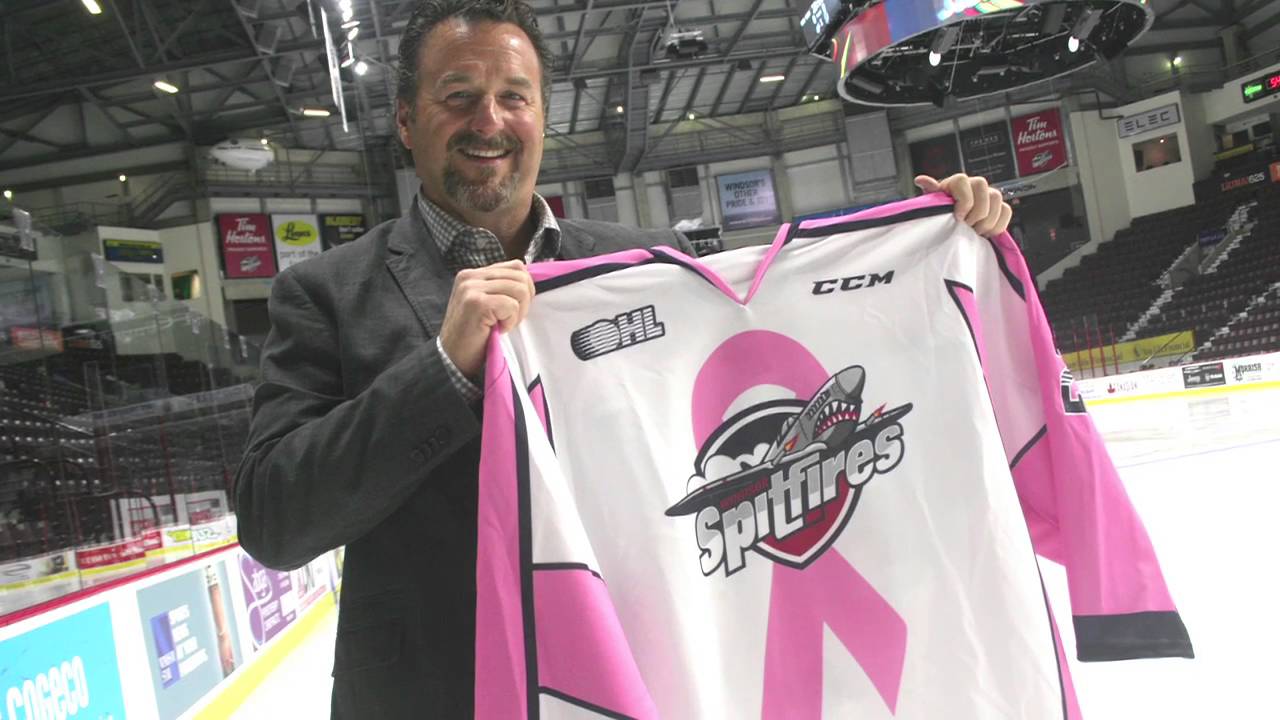 The Spitfires had a table set up with toques, mini-sticks and other pink items for sale. Proceeds from the game went to Windsor-Essex Cancer Centre Foundation. For the players, the Hounds had pink tape and laces, the Spitfires had pink jerseys and tape and the officials wore pink skate laces.

A Little Goes a Long Way

According to the Canadian Cancer Society, it is estimated that 25,000 women will be diagnosed with breast cancer in 2016, of which just under 5,000 will pass away. Breast cancer accounts for more than one-quarter of all cancers in women in 2016.

Breast cancer has touched many lives and having teams, players and leagues join forces to battle against it and help raise crucial funds and awareness.

The OHL has been a consistent partner in helping raise funds for Breast Cancer Awareness. While most OHL “Pink in the Rink” nights take place in October, some have been held in January. If your team hasn’t held their event this season but is planning on it, go out to the game. Buy a shirt, buy a toque or donate to a local charity. Your donation will go a long way to helping someone smile on their way to winning this important battle.