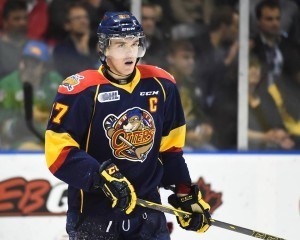 By winning the Draft Lottery and securing the rights to Connor McDavid, the Oilers now have enough pieces to keep or trade that winning the Stanley Cup is almost an inevitability barring a colossal screw-up.

The fact is, by winning four of the last six top picks (Hall, Nugent-Hopkins, Yakupov and McDavid) they have no excuse for being anything short of the best team in hockey for the next decade.  One way to screw it all up though, would be to be too patient.

The NHL has a Salary Cap and because of that, younger players on entry-level contracts carry incredible value. The Oilers are now in a situation where they can skate McDavid, Nurse, Draisaitl and Klefbom on ECLs. Also, Nail Yakupov only makes $2.5 million for the next two years.  That is five players for the next two seasons who have a great chance of being above average NHLers, probably more and who make peanuts compared to what they can offer.

It is in those two years where the Oilers need to go all-in to try and win the Stanley Cup.  The reason is that when those ELCs are up, the Oilers – assuming none of those players are huge busts – won’t be able to keep the team together. McDavid alone will probably cost $10 million/per when his ECL deal is up and by then you’re talking a minimum of 30 million to keep the five guys I just mentioned together.  Eberle, Hall and RNH already cost $18 million, so keeping the whole team together is technically possible, but it will be extremely hard to add other pieces by then.

Therefore, for the next two years, the Oilers have have tons of money to play with. Assuming the cap next season is around $73 million, the Oilers will have roughly $20 million to spend this year and $34 million the following year. It  imperative that they attempt to use the three years that Connor McDavid will be cheap to try to win.

Immediately after the Oilers won the top pick, people started talking about trading Nugent-Hopkins, Eberle or Hall. This would be incredibly short-sighted on the part of the Oilers. They may have to trade from their core – I am not saying it couldn’t happen, but the smart thing to do would be to use the second draft pick they have in the first round this year (from Pittsburgh) as well as their first-rounders  in each of the next three drafts to improve their team now.

They’ve done incredibly well in the draft and now it is time to convert their next few draft years to currency.  If two firsts and a second can get your Phil Kessel, the Oilers should be able to use what they have to acquire the goalie and defensemen they desperately need.

Keeping What They Already Have

The reason the Oilers shouldn’t trade any of their top forwards is because a) they can use draft picks to fill their current roster holes b) they have all of their good young forwards on beautiful, team-friendly deals, and c) they have so many exploitable match-ups available to them now.

For example: with McDavid playing 1C and facing top defenses, RNH can now exploit all the secondary coverage he’s given. Having Draisaitl at 3C is ridiculous and makes it impossible for other teams to match-up against them.  Finally, they’d have the option of matching each of their top centres with a top winger: Eberle with McDavid, Hall with RNH and Yakupov with Draisaitl.  What team is going to be able to cover that? Yakupov playing against the third best defense grouping from each team in the league? He’ll  score 50, easy.

They could easily send Pittsburgh’s pick to the Leafs for Bernier and boom! Goalie troubles solved. If you don’t like Bernier, maybe Anderson/Gibson from the Ducks is more palatable and that could probably be accomplished just as easily.

On defense, they have Nurse, Klefbom and Schultz.  Ideally I think to compete you’d like to have at least three more players who can make Nikitin, Fayne and Ference expendable.

So, for one of those guys, you sign Cody Franson, who’s an  unrestricted free agent, who they can afford and who is a top pairing NHL defenseman, no matter what’s happened in Nashville.

For the other two, you draw up a list and then attack each team on it, offering first and second round picks for the next several drafts (and this year’s two second-rounders, one of which is basically a first). If you’re willing to trade someone two first-rounders, you can probably get at least one all-star top pairing player.  For the final guy, go for a cheaper, vet who dominates possession and would benefit your young guys just by being around: John-Micheal Liles.

If the Oilers use this plan to build their defense and goalie and leave their forwards alone, they can easily enter next season as a Stanley Cup favorite.