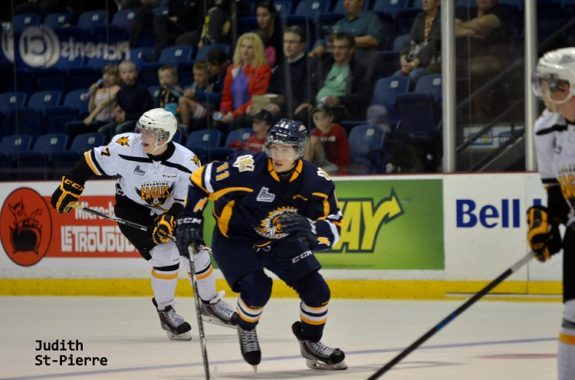 Dennis Yan took one of the most difficult routes to get to where he is today. They 18-year old who plays for the Shawinigan Cataractes of the QMJHL was born in Portland Oregon to Russian parents. He stayed in Portland for the first five years of his life, before the family moved back to Russia where Yan started playing hockey. Hockey is one of Russia’s most popular sports and Dennis took to the game easily. But at the age of 14, his parents urged him to go back to North America to develop his hockey skills further if he wanted a chance to play in the NHL – that’s precisely what he did and he hasn’t looked back.

In his first year with the Cataractes, Yan put up 33 goals and 64 points and added another seven goals in eight playoff games. He’s a natural goal scorer with a lightning quick release and pinpoint accuracy. The finesse he shows is consistent from shift to shift. Yan’s hands are silky smooth which gives him time and space to use his shot. His skating is crisp and agile making him a speedy winger.

I’ve liked what I’ve seen in his forechecking and he likes to create pressure, but oftentimes I’ve seen him coast when backchecking and in his own zone. His overall defensive game is what he needs to work on most. Another area of improvement is learning not to shy away from physical play. Yan is not bulky, but he does have decent size for a 6’1 winger.

Dennis Yan has the skill to be a 2nd rounder. I think he gets chosen somewhere in the late 2nd/early 3rd round.

“Highly skilled winger with excellent speed, first step and offensive instincts. A natural goal scorer finds the open space and buries his chances. Displays a lightning fast release, and hard shot. Flies around the net and finds the soft spots in coverage, always involving himself in high traffic areas. He is a scorer but also an offensive generator, with soft hands and great balance at high speed. Surprisingly physical in pursuit of the puck, and a good forechecker. Needs to balance his offensive prowess with lots more work in his defensive zone. “

“From a strictly offensive standpoint, Yan has to be considered one of the most dynamic players in the age group as a result of his exceptional skating, vision, and sheer sniper’s mentality. Currently playing up with the U18 group, Yan is a Top 5 scorer in the Midget Major loop with Belle Tire after a tremendous season with the Lambton Jr. Sting as an underage player last year. Yan’s finishing ability would allow him to be a goal scorer as early as 16, but it appears that Yan may be destined for Ann Arbor and the US National Team program.”

Although he has dual citizenship between Russian and the USA, Dennis Yan played for Team USA twice in the U-17 WHC and the Ivan Hlinka Tournament. He won a gold medal with the U-17 team.

Timid when it comes to physical play